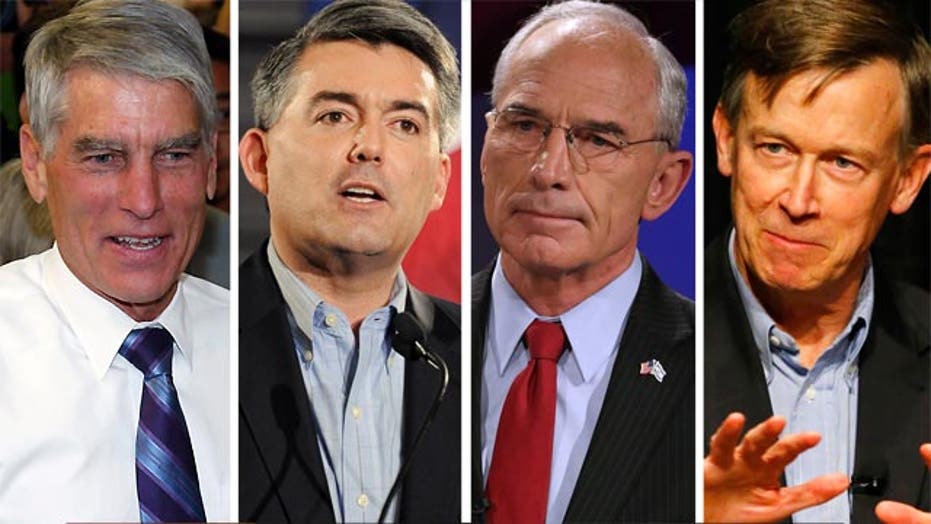 DENVER – You may have just sat down to a family dinner. Then someone knocks on your door – and asks for you by name, as if they know you. When you get up to see who it is, the stranger starts firing off a string of personal questions.

That stranger, though, is not peddling products – just trolling for votes. These types of scenes are playing out all across Colorado. With Election Day less than a month away, campaign foot soldiers armed with data have been strategically invading the state’s neighborhoods in one of the most aggressive political ground operations in the country.

The governor's office, a U.S. Senate seat, a U.S. congressional seat, plus a number of controversial ballot amendments are being hard-fought here in Colorado, which is considered a swing state. Making it even more unpredictable this midterm election is a shift in voter affiliations. The number of unaffiliated voters has grown by about 200,000 in the past four years.

Well-financed groups are targeting people who may not feel strongly one way or the other on the issues or candidates. A lot of information about voters is public, allowing canvassers to go after a particular set of people to get out the vote.

"You need to get your message out ... to try to win people over and really, the people you're looking at here are... unaffiliated,”  Metropolitan State University of Denver political science Professor Norman Provizer said. “That's who's going to decide the election."

Upping the urgency, this will be the first partisan election where Colorado will have an all-mail ballot. Every registered voter will automatically receive one.

"This tends to be a very western phenomenon," Provizer said. Colorado joins two other states, Oregon and Washington, with an all-mail-in election. Provizer said the ballots have helped increase voter turnout in these states "because in a midterm election, voter turnout is exceptionally important.”

He noted “midterm elections really get less enthusiasm from voters than presidential elections."

While overseas and military members already have theirs, ballots for domestic voters are expected to be mailed Oct. 14 in Colorado, a full two weeks ahead of Election Day. Despite everyone receiving mail ballots, voters also will be able to show up and cast ballots in person.  The Colorado secretary of state's office expects more than 90 percent of voters to cast their ballots using their mail ballot.

Richard Coolidge, spokesman for Colorado Secretary of State Scott Gessler, explained how sophisticated the get-out-the-vote operations are. "They can find out who hasn't voted, who has voted and they begin to really narrow their searches as they get closer and closer to Election Day," he said.

What's also different this time is Colorado voters can register and vote on Election Day -- changes instituted by the Democrat-controlled state legislature. Colorado already has an impressive track record for turnout, ranking third in the nation in 2012. Coolidge said "really what drives turnout is who's on the ballot."

Traditionally, people who vote early tend to be older, more educated and Republican, according to Provizer. But there's a caveat: interest groups and campaigns have learned from the Obama blueprints of 2008 and 2012. "If you campaign to try to convince groups to get your ballot in early, do that, then that can have an impact as well.”

The final push for bringing in votes in these tight races is expected to look different than past years. "Instead of people showing up to your door saying 'Have you voted yet, do you need a ride to the polls? We can take you to the polls', people are going to say, 'Hey, I can grab your ballot and take them to the poll for you'," Coolidge said.

Coolidge goes on to caution "people are really going to have to consider, you know, if they're comfortable giving it to a stranger at their doorstep or politely decline and turn it in themselves."

While collecting mail ballots to turn in on behalf of others is legal here, the secretary of state's office says people cannot turn in more than 10 ballots this election. The office says this will be monitored more closely than in the past.

The ground operations, though, are an increasingly important factor for campaigns and the groups boosting them. The liberal NextGen Climate told the Denver Post it expects to invest even more money on ground operations than television ads.