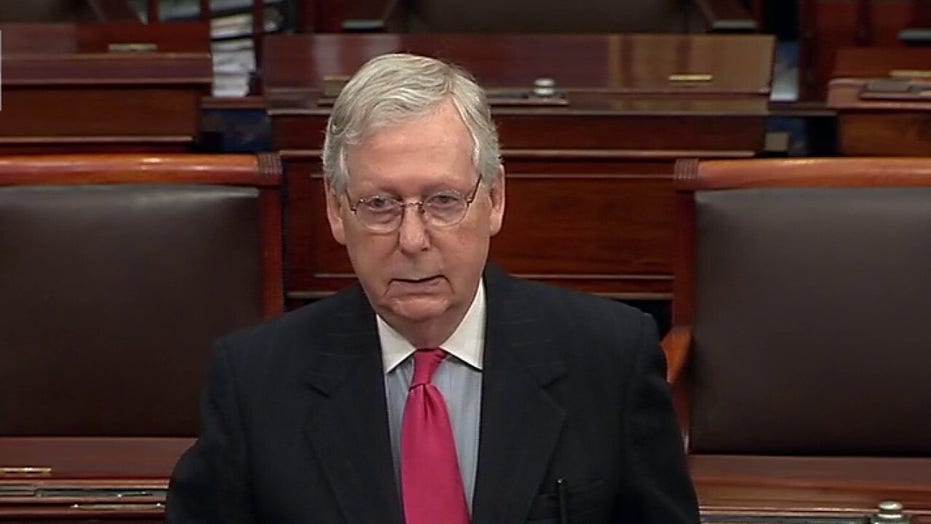 Mitch McConnell: America will win coronavirus fight because of the people, not Washington

'You cannot outlaw the virus,' says Mitch McConnell saying no amount of emergency relief can beat COVID-19, but the American people will

There’s a reason a verbal melee erupted inside the Senate chamber Monday afternoon. Senators traded barbs and vocally brawled as the Senate struggled to approve the latest legislative measure to combat the coronavirus.

Lawmakers are stressed about not getting the bill done. They’re stressed about their continued presence in the Capitol complex, day after day, night after night. They’re fretting they’re converting the place into the legislative equivalent of a daycare center full of contagious toddlers the week after Christmas. The lawmakers worry they’re making one another sick as they linger in the same marble corridors, Senate office buildings and the Senate chamber itself.

Tempers crescendoed and senators spewed rhetorical venom at one another because anxiety spiked this week. The U.S. has never quite fought an enemy like coronavirus. The U.S. Capitol is simply a soundstage for American history. It plays out under the Capitol Dome. And that’s why such invective commandeered the Senate floor this week.

That’s what’s going on in the country. There’s fear. There’s dread. There’s concern. And it’s reflected in the U.S. Capitol.

We have representative government.

It had been 25 years since such oratorical rancor seized the Senate floor like Monday.

It’s not uncommon for floor fights in the rowdier, much larger House of Representatives. But things are typically calmer and more polite in the U.S. Senate.

But this is Congress in the time of Coronavirus. That’s why Monday was unique.

“We have been fiddling around!” charged McConnell, angrily engaging Sen. Joe Manchin, D-W.Va., across the room.

Sen. Ben Sasse, R-Neb., presided over part of the verbal melee from the dais.

“There is not right to reserve the right to object!” responded Sasse.

“I have the floor!” asserted the New York Democrat.

“No! You do not!” shouted Sasse at Schumer.

Senators cursed so loudly in the rear of the chamber, that their profanity made it onto the Senate’s video and audio feed.

Sen. Doug Jones, D-Ala., the most-vulnerable Democrat running for re-election this cycle, sided with Democrats on a procedural vote Sunday related to the coronavirus bill. By Monday, Jones was fed up.

“Do you think that was a good look for the United States government to see people acting like a bunch of kindergartners sniping at each other?” asked Jones. “What happened on the floor of the United States Senate earlier today was just embarrassing for everybody.”

This may have been inevitable.

Congress talks a lot about “must pass” bills. But there has never have been a “must pass” bill like this one in American history. The measure may prove to be the largest and potentially most-crucial piece of legislation in U.S. history.

At Tuesday’s White House briefing, economic adviser Larry Kudlow described the price tag of the coronavirus phase three bill as clocking in around $6 trillion. Now, to be clear, that isn’t all new money. Kudlow noted that about $4 trillion accounted for liquidity measures taken by the Federal Reserve. Some of the money in the legislation deals with loans. Less than $2 trillion amounts for “new” money.

But that is still a staggering bill in its raw size.

Consider that Congress approved $8.3 billion for NIH and the CDC in the phase one coronavirus bill. No one truly knows the cost of the second coronavirus response. However, the family leave portion alone costs $104 billion. The government spends a grand total of around $4.3 trillion each year. More than 70 percent of that goes toward entitlements. The remaining $1.3 trillion is what Congress allocates each year in its annual appropriations bills. Large chunks of the bill go toward loans and other fiscal guarantees. But the size of this legislation - coupled with the other two bills – dwarfs what Congress spends each year.

Sen. Roy Blunt, R-Mo., signaled this week that work is already starting on a phase four bill. Who knows how big that will be.

The Senate hoped to vote on the measure early this week. Then Tuesday night. Then during the day on Wednesday. As they say on Capitol Hill, nothing is decided until everything is decided. Nothing was going to happen until the Senate finally settled on concrete bill text – even though the White House and Senate Republican and Democratic leaders announced an agreement in the wee hours of Wednesday morning.

Lawmakers and aides struggled with drafting the legislation. They were doing so on the fly – authoring monumental provisions at lightning speed. That’s why there were problems making sure the language was right.

The House met briefly Wednesday morning for a short session and gaveled out immediately. This may seem counterintuitive. But stretching this out in the House could save time in the long run.

If the Senate wasn’t ready, why should the House commit? That’s the same reason the Senate cut town two weeks ago as the House struggled to finalize the coronavirus phase two bill. Calling the House back into session immediately could do more harm than good if the House wants to move fast. House leaders on both sides of the aisle are taking time to walk their respective members through the legislation to make sure that there is buy-in. House Republicans have already signaled lots of support for the bill – now bragging that they beat back many extraneous provisions pitched by Pelosi. And, many priorities important to House Democrats are already tucked in the legislation. Schumer continued to engage Treasury Secretary Steve Mnuchin at length. Part of Schumer’s negotiating was on behalf of Pelosi. That will make it easier for Pelosi to sell the plan to her caucus.

Senate passage will send a strong, strong signal to the House that the bill is “ok” for members to support it on both sides of the aisle. As we’ve written in this space before, recall the old Life Cereal commercials. Remember that none of the kids would eat the cereal until “Mikey” tried it. Once Mikey ate it, all of the other kids jumped in. Congress works in a similar fashion. Once one body passes a bill, that legislation is much more palatable to the other chamber.

But it’s unclear how the House will vote on the measure.

It is unlikely that the House will conduct a regular roll call vote where they bring all 430 current members back to the chamber to vote. There are health risks.

There are three ways both the House and Senate approve bills, resolutions and amendments:

None of these methods are strange or weird. The House and Senate pass and defeat items all the time via all three methods. But the question is whether the House and Senate should vote on arguably the biggest bill in American history without a regular roll call vote.

House Minority Leader Kevin McCarthy, R-Calif., argued he may prefer the House to approve the bill via voice vote. That’s where everyone in the chamber (probably a smaller group) shouts aye and those opposed nay. The loudest side wins. That way, those who at least want to show up can say they tried to oppose the measure. The speaker presiding over the chamber decides which side is the most boisterous.

Interestingly, McCarthy asserted that the Senate should have approved the bill days ago, criticizing Democrats. But McCarthy pushed for at least a day pause so the House could consider the plan.

There is also consternation about how long the process is taking. McConnell introduced the original version of this bill during the middle of last week. A bicameral legislative process involving up to 535 people was not designed for speed. What you are witnessing is Congress moving as fast as it can: writing a gigantic bill. Getting triple sign off from the Democratically controlled House, the Republican-controlled Senate and the Republican-controlled White House. Then, running all of the requisite parliamentary traps of advancing the package through not one but two houses of Congress.

And that’s why things are so tense. There’s pressure. There’s fear. There’s alarm.

Not just around the country. But inside the walls of the U.S. Capitol.