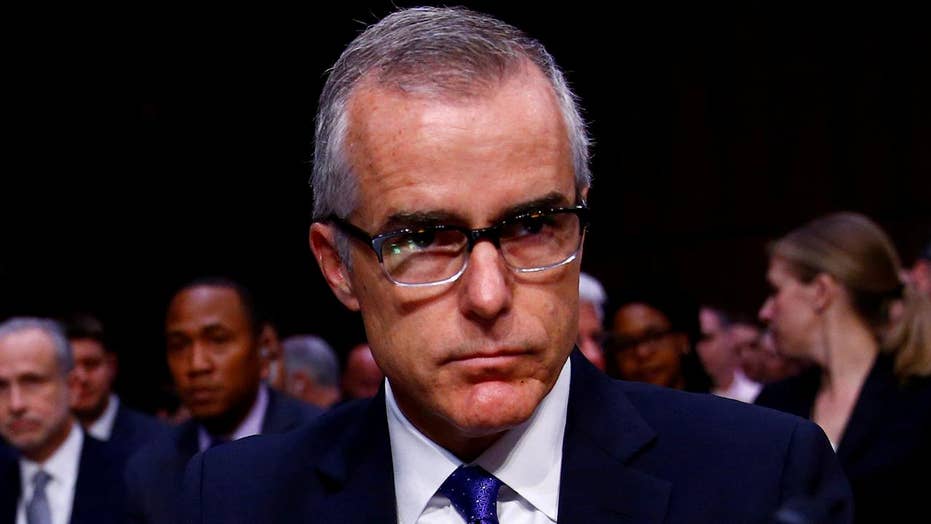 Andrew McCabe accused of lying to the Justice Department

Rep. Jim Jordan, R-Ohio, a member of the House Oversight Committee, made the revelation during a Thursday night interview on Fox News.

“It wasn't once, twice, it wasn’t even three times,” Jordan said on "The Ingraham Angle." “Four times he lied about leaking information to The Wall Street Journal about the FBI.”

Department of Justice Inspector General Michael Horowitz’s review of the FBI and DOJ’s actions related to its investigation into Hillary Clinton’s use of a private email server has not been released publicly. But some lawmakers, like Jordan, have obtained copies of the report.

Congressmen Jordan and Meadows demanded access to DOJ documents regarding Andrew McCabe's firing; they share details and react to Sessions’ decision not to appoint second special counsel on 'The Ingraham Angle.'

“He lied to James Comey. He lied to the Office of Professional Responsibility. And he lied twice under oath to the inspector general,” Jordan said.

“It wasn't once, twice, it wasn’t even three times. Four times he lied about leaking information to the Wall Street Journal about the FBI.”

Sessions said the DOJ’s inspector general had determined McCabe was not truthful during his review of the Clinton email investigation and the FBI’s Office of Professional Responsibility recommended his firing. He also accused McCabe of leaking to the media.

The number of times McCabe was accused of lying had not been public.

But McCabe has defended his actions.

“During these inquiries, I answered questions truthfully and as accurately as I could amidst the chaos that surrounded me,” he said in a statement after his firing. “And when I thought my answers were misunderstood, I contacted investigators to correct them.”

On Thursday, a GoFundMe crowd funding effort set up for his legal defense fund argued his career was “long, distinguished, and unblemished.” It raised more than $400,000 as of Friday afternoon.

“His reward for that has been a termination that was completely unjustified, amidst repeated ad hominem attacks by the President of the United States,” it reads.

McCabe was fired just days before he would have been eligible for a lifetime pension, meaning those benefits could now be in jeopardy.