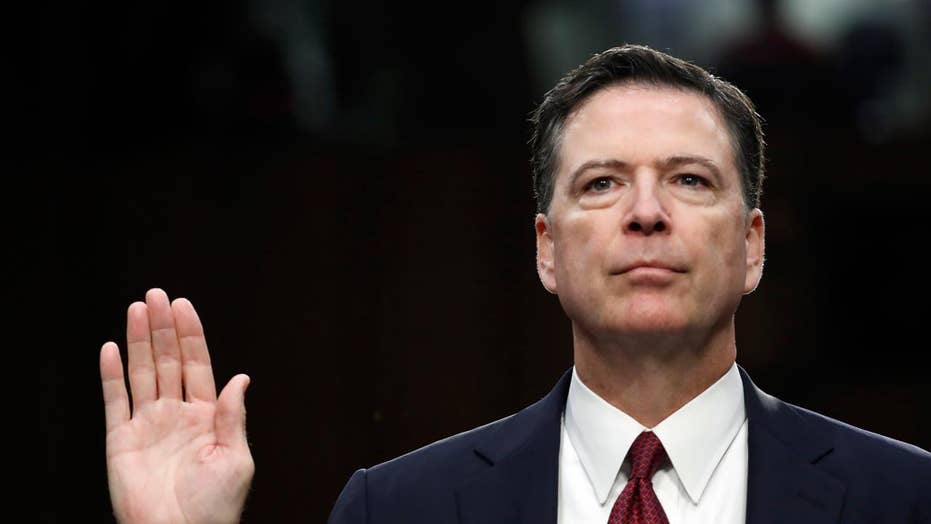 Former federal prosecutor Andrew McCarthy on the political fallout from the IG report and the Mueller investigation.

Justice Department Inspector General Michael Horowitz confirmed publicly Monday that his office is investigating James Comey for his handling of classified information as part of memos he shared documenting discussions with President Trump.

The inspector general’s comments confirmed reports dating back to April that the ex-FBI director was facing scrutiny, amid revelations that at least two of the memos he shared with his friend, Columbia University Professor Daniel Richman, contained information now deemed classified.

The confirmation came during Monday's Senate Judiciary Committee hearing, where Horowitz and FBI Director Christopher Wray testified on the findings in the IG’s report on the handling of the Hillary Clinton email probe.

“We received a referral on that from the FBI,” Horowitz said, in response to questioning from Senate Judiciary Committee Chairman Chuck Grassley, R-Iowa, about the Comey memos. “We are handling that referral and we will issue a report when the matter is complete and consistent with the law and rules.”

Comey, back in April, confirmed to Fox News' Bret Baier that the IG's office had interviewed him with regard to the memos, but downplayed the questions over classified information as "frivolous" -- saying the real issue was whether he complied with internal policies.

Grassley, though, told Horowitz on Monday, "I don't happen to think that is frivolous."

Comey, in testimony before Congress last year, acknowledged he shared the memos with the intention of leaking to the press and spurring the appointment of a special counsel.

In April, Fox News initially learned that Horowitz was looking into whether classified information was given to unauthorized sources as part of a broader review of Comey’s communications outside the bureau—including media contact.

“I didn’t consider it part of an FBI file,” Comey said. “It was my personal aide-memoire…I always thought of it as mine.”

In his testimony last year before the Senate Intelligence Committee, Comey said he made the decision to document the interactions in a way that would not trigger security classification.

But in seven Comey memos handed over to Congress in April, eight of the 15 pages had redactions under classified exceptions.