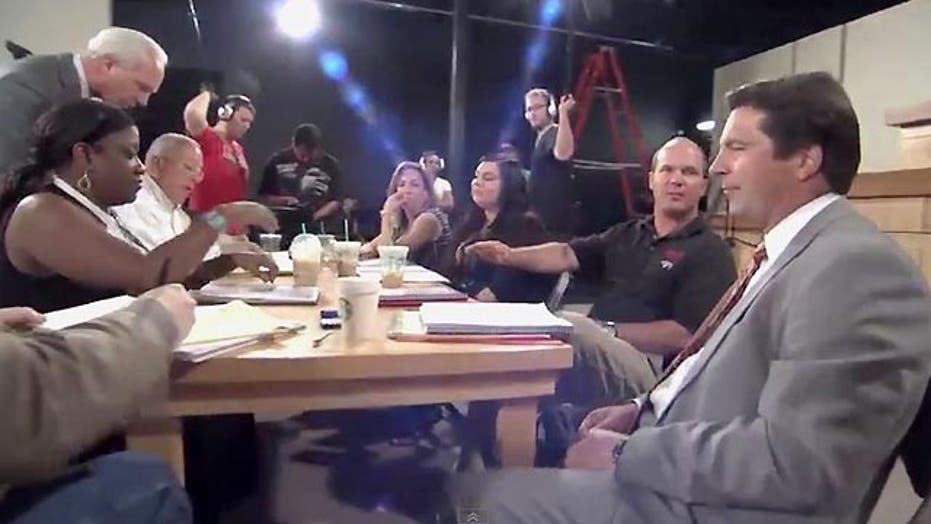 Eight citizens try to balance federal budget in a weekend

Ever watched “American Idol” and wished the contestants were debating the federal budget instead of belting out tunes?

Okay, so that's probably never crossed your mind. But an in-the-making series is trying to capture the "Idol" vibe all the same, in a setting where America could vote on political decisions made by ordinary people -- instead of singing talent.

PR professional and creator Tom Carroll is testing the concept of politics reality TV with a lead-off “reality film” called “Big Bad Budget.” Carroll distributed it to public television stations over the summer, and hopes it'll be the first in a series.

He claims the show could “rewrite the rules of American politics” -- despite the fact that all the decisions would, of course, be hypothetical.

Here's the set-up: Carroll and his team took eight ordinary people from Albuquerque, N.M., and challenged them to balance the federal budget in a single weekend. The group, made up of four Republicans, three Democrats and one Democrat-leaning independent, was forced to fight it out until they came up with a way to solve Washington's biggest head-scratcher.

Spoiler alert: the group was able to balance the budget.

But can figuring out the cure for the entitlement crisis really draw an audience like Taylor Hicks' blistering harmonica solos or a Fantasia showstopper?

Not yet, anyway. For now, options for seeing the show are rather limited. A spokesman for PBS told FoxNews.com the movie is being shown on the PBS member station in Albuquerque, but is not part of the national schedule.

It is also scheduled to play on a public access channel in Colorado on Sept. 4. (Carroll claimed they are also in talks with Netflix.)

Those who participated in "Big Bad Budget" gave mixed reviews about how effective it could actually be on changing the tide in Washington, which faces an $18 trillion national debt and an annual shortfall that's still about a half-trillion dollars.

One panelist, Seth Heath, told FoxNews.com he doubts the experience really mirrors what it’s like to serve in Congress. “I would hope [members of Congress] are a little more informed,” he said.

In fact, Heath said the whole experience “disheartened” him on politics. Heath, who is a Republican, said he was frustrated by the viewpoints of the Democrats on the team, who he said lived in “la-la land.”

“I don’t have a lot of hope for the future of politics because of how unrealistic people are,” Heath said.

By that measure, the panel may have been a spitting image of Congress.

“We were well aware that we were not subject to the same pressures or limitations that bedevil Congress ... no lobbyists or constituencies to contend with, no need to fundraise from stakeholders, no need to get re-elected,” Rosenblum, the independent, told FoxNews.com in an email. “Notwithstanding, even though it was a fictional creative exercise without practical limitations, the process of trying to balance the budget was very difficult.”

Carroll, who previously worked as a political consultant, told FoxNews.com he has thought for years that the problems facing Congress could easily be solved by ordinary Americans if they had the chance. So, he said, he decided to put his money where his mouth is. He found the eight people, stuck them in a room and started filming.

Carroll said the fact that the participants were successful proves Congress should be able to do so as well, even though lawmakers must contend with many other outside forces, such as constituents or lobbyists.

Carroll has bigger plans than “Big Bad Budget,” he says. He envisions his reality series doing the same thing multiple times: picking a group of people to come up with solutions to problems currently being duked out in Congress.

Viewers at home could then vote on which solution they preferred. (The budget program did not include this kind of audience participation.)