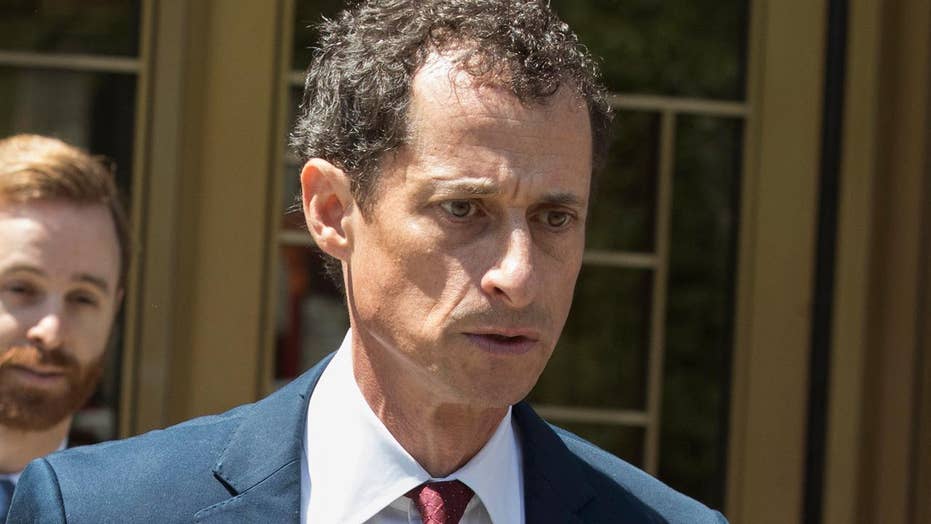 Abedin, a long-time aide to Hillary Clinton, first separated from Weiner in August 2016, after learning of allegations that her husband had sent explicit photos to a then 15-year-old girl.

Earlier Friday, a tearful Weiner pleaded guilty to sexting a minor, apologizing in court to the teenaged victim and blaming his own "destructive impulses" for the prison time that now awaits him.

The New York federal judge accepted Weiner's admission to sending sexually explcit texts to a minor across state lines, and Weiner agreed to not appeal any sentence between 21 and 27 months in prison. He also must register as a sex offender.

"I have compulsively sought attention from women who contacted me on social media, and I engaged with many of them in both sexual and non-sexual conversation," Weiner said in a prepared statement. "These destructive impulses brought great devastation to my family and friends, and destroyed my life's dream of public service.

"I remained in denial even as the world around me fell apart," he added.

In the statement, Weiner apologized to his family and the teenager and said he had come to grips with his twisted compulsions.

"I have a sickness, but I do not have an excuse," Weiner said.

The FBI began investigating Weiner in September after a 15-year-old North Carolina girl told a tabloid news site that she and the former politician had exchanged lewd messages for several months.

She also accused him of asking her to undress on camera.

The New York Times first reported that the former New York Democratic congressman would enter the plea Friday in Manhattan.

The plea covers conduct from January to March of 2016. The charge reportedly carries a potential sentence ranging up to 10 years in prison – though the former congressman also could avoid prison entirely.

The outspoken politician resigned from Congress in 2011 after an errant tweet ended up exposing his sexting habits. He later mounted an unsuccessful run for New York City mayor.

But the scandal, first reported by the Daily Mail, exposed that he had been sending explicit messages to a minor, the controversy took a turn into criminal territory.

This discovery led the FBI to revisit the case of Clinton’s personal email use as secretary of state – while the case was again shuttered, Clinton has since cited that development as contributing to her defeat.