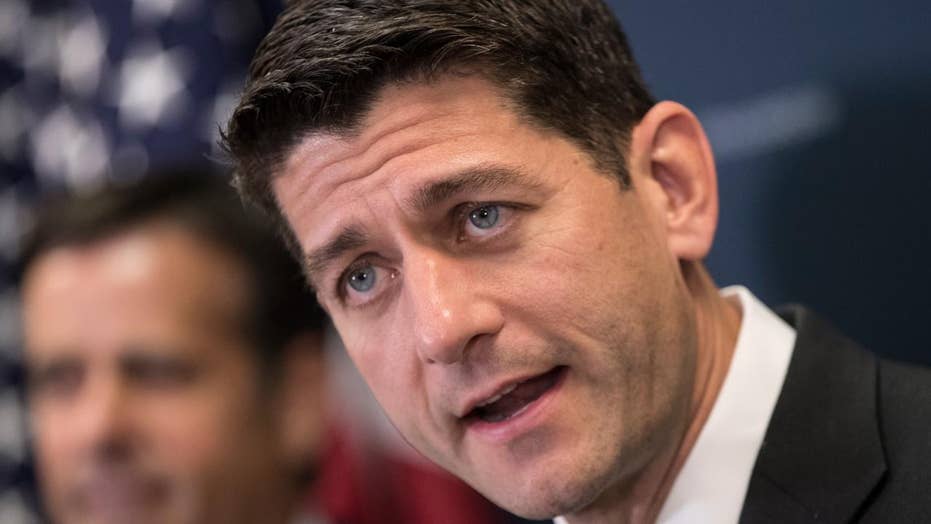 Paul Ryan on Russia sanction bill: We are protecting the Constitution

House Speaker Paul Ryan says the Russia sanction bill is delayed due to a ‘blue-slip’ violation that went against Constitutional protocol.

Republicans relished criticizing congressional Democrats when they fumbled or flat-out didn’t try to approve a budget.

They took particular joy in upbraiding former Senate Majority Leader Harry Reid, D-Nevada, when he didn’t shepherd a budget through the Senate, piously preaching the virtues of congressional budgeting.

Certainly the struggle to OK a budget doesn’t look good for Republicans, who now control the House and Senate.

There was a plan a few weeks ago to advance a budget through the House Budget Committee. But that effort crumbled when Republicans fought over defense spending. Republicans fractured again when they fought over slashing some $50 billion in entitlement spending.

The law says the House is supposed to adopt a budget in April.

But the House’s collapse when it comes to budgeting threatens to imperil the most holy of Republican agenda items: diminishing federal spending and tax reform.

Let’s go subterranean for a moment.

Those dollars just fly out the door automatically. It’s known as “mandatory spending.”

Now, Congress doesn’t have to spend it. Lawmakers voted decades ago against deciding each year how much money to allocate to those programs. The federal Treasury directs about 70 percent of all federal spending to that trio of entitlements. An increasingly large chunk of “mandatory” spending is interest on the debt.

The rest of the money -- about 30 percent -- constitutes “discretionary” spending.

Congress wields “discretion” over spending everything else. How much goes to the National Park Service. How much to run the Federal Reserve. How much to operate the State Department.  How much it allocates to itself.

By the way, the chunk of change devoted to the legislative branch is on the rise after the shooting at the Republican congressional baseball practice. A few million more dollars are in the pipeline for security improvements and to hire additional U.S. Capitol Police officers.

So, if you truly wanted to harness federal spending and the nation’s $21 trillion debt, from which side of the ledger would you cut? From mandatory spending or discretionary spending?

Black and other GOPers would like to reduce $200 billion in entitlement (mandatory) spending. But a coalition of 20 moderate Republicans pushed back. They argue that Black’s plan isn’t “practical” and that they are “reticent” to vote for such a deep cut. Losing those 20 Republicans doesn’t quite kill the vote count for the budget. But it’s close.

President Trump wants to spend more on defense in this budget. Defense hawks demanded somewhere north of $640 billion for the Pentagon. Of late, the defense target has fallen between $617 and $623 billion.

One senior Republican close to the discussions suggested they “should have started with a defense number around $603 billion and negotiated up” to lure defense-minded Republicans.

Keep in mind that Republicans would first have to engineer a budget that wouldn’t collapse in committee to say nothing of getting nuked by GOPers on the floor.

So, there’s a stalemate.

The House didn’t advance a budget last year on Ryan’s watch, either. No budget means there’s no way to mine the federal coffers for major cuts essential to contracting the deficit.

But a bigger problem lurks for Republicans.

No budget could imperil the GOP plan to approve tax reform.

“Tax reform is happening, not next year or next Congress,” he said recently. “It is happening now, in 2017.”

Here’s the issue: Republicans would face a filibuster in the Senate from Democrats and probably some Republicans on tax reform.

The GOP leadership in both bodies wants to use a special process called “budget reconciliation” for tax reform to avoid a filibuster. This is the same parliamentary scheme Republicans are now using to deal with ObamaCare.

Otherwise, the sides must round up 60 votes just to break the filibuster to start debate on the tax bill and 60 votes a second time to wrap things up.

However, there’s a reason the process is called “budget reconciliation.” The House must first adopt a budget to give the Senate something with which to work.

No budget, and any effort at tax reform could be in trouble.

Certainly the House could approve a “skeleton” budget, designed expressly as a “shell” for the Senate to use when handling tax reform.

In other words, it’s a budget in name only. Only the framework. The House essentially followed that path in January to set up the legislative vehicle to repeal and replace ObamaCare.

Meantime, look at the raw dollars. The biggest standoff among congressional Republicans in settling the budget impasse is waged between defense advocates and Republicans who want to fund everything else -- yet cut spending.

This is where things get interesting.

The House Appropriations Committee wrote a defense spending bill totaling $658.1 billion. That’s $68.1 billion more than last year and $18.4 billion more than Trump requested. When the House Armed Services Committee wrote this year’s defense authorization bill -- which is different from the appropriations legislation -- Republican lawmakers found themselves all over the map.

“We do not have $600, $700, $800, $900 billion to spend on defense unless we pretty much completely eliminate all non-defense discretionary spending, which there isn’t support for doing,” he said. “Twenty trillion dollars in debt, a $706 billion deficit, trying to find $50 billion in mandatory savings, and the majority can’t even do that, all right?”

Smith’s remark crystalizes the entire debate about the GOP attempting to complete a budget.

As a result, Kentucky Rep. John Yarmuth, the leading Democrat on the House Budget Committee, says that the GOP “shell” budget is “looking more and more likely.”

And there’s a reason behind that. The “faux” budget would not be so much to actually alter the nation’s spending trajectory. But if the House approves a budget, it will serve as a contrivance to help tax reform navigate the U.S. Senate.