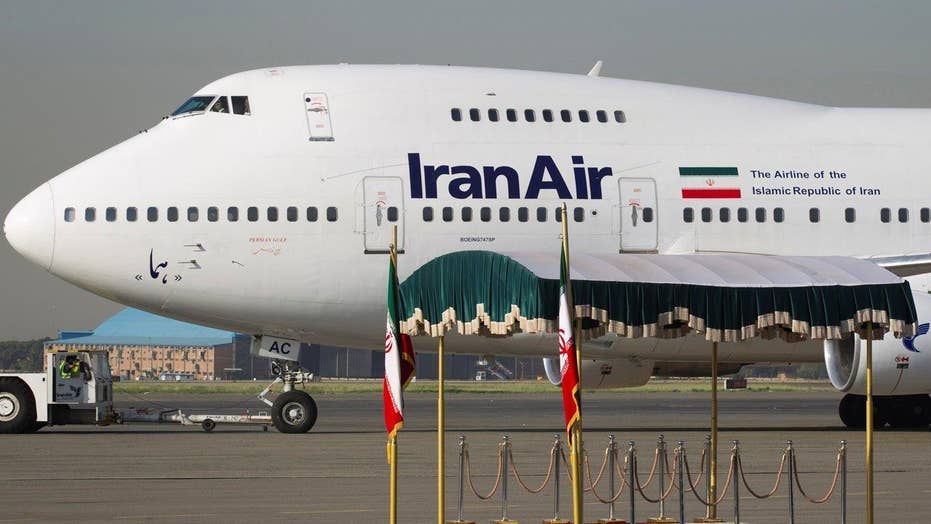 Strategy Room: Jeanne Zaino and Brian Morgenstern weigh in on the Republican-led House's passing of two amendments to a spending bill aimed at blocking Boeing's planned sale of 100 aircraft to Iran

The House overwhelmingly approved a pair of measures Thursday aimed at blocking Boeing from selling aircraft to Iran, amid fears the deal could end up benefiting the country’s military as well as terror groups Hamas and Hezbollah.

"To give these types of planes to the Iranian regime, which still is the world's largest state sponsor of terror, is to give them a product that can be used for a military purpose," said Rep. Peter Roskam, R-Ill., who sponsored the measures.

The amendments to a separate spending bill are aimed at the agreement struck last month between the Chicago-based company and Iran Air. The deal is estimated to involve roughly 100 aircraft, consisting of 777s and 737s, and be worth up to $25 billion.

The controversial agreement -- along with another involving Boeing's European rival, Airbus -- was made possible by the easing of trade sanctions under the Iran nuclear deal. Lawmakers had raised objections even before the deal was signed in late June, and quickly scrambled to move legislation.

One of the Roskam-sponsored amendments would prohibit the Office of Foreign Assets Control from using funds to authorize a license for aircraft to be sold to Iran – Boeing would need such a license to make the sales.

The other amendment would block Iran from receiving loans from U.S. financial institutions to purchase “military-fungible aircraft.” A spokesman for Roskam told FoxNews.com that while Iran has not announced how it would secure financing, there are very few financial institutions outside the U.S. big enough to handle such a transaction.

Both amendments passed by voice vote in the House and were added to a financial services spending bill that passed 239-185. The bill must be reconciled with the Senate version before it can reach President Obama’s desk.

However, even if the Iran measures end up in the final bill, Obama would likely veto the package if he thinks the measures would undermine the nuclear deal itself.

The administration has not officially objected to the Boeing-Iran deal at this stage.

State Department spokesman John Kirby said last month the sale and any possible future deals depend on Iran's good behavior and said the U.S. could revoke the license for the deal if planes, parts or services are "used for purposes other than exclusively civil aviation end-use" or if aircraft are transferred to individuals or companies on a U.S. terrorism blacklist.

Any suggestion "that we would or will turn a blind eye to Iran's state sponsorship of terrorism or their terrorist-supporting activities is completely without merit," Kirby said.

Boeing did not immediately respond to a request for comment from FoxNews.com.

The company issued a statement to The Associated Press after the agreement was signed last month, saying it went ahead "under authorizations from the U.S. government following a determination that Iran had met its obligations under the nuclear accord reached last summer."

Roskam, though, warned the aircraft could be used by Iran’s Revolutionary Guard.

"To give these types of planes to the Iranian regime, which still is the world's largest state sponsor of terror, is to give them a product that can be used for a military purpose," Roskam said, claiming the aircraft could be reconfigured to carry 100 ballistic missiles or 15,000 rocket-propelled grenades.

Roskam, along with Jeb Hensarling, R-Texas, wrote to Boeing CEO Dennis Muilenburg in June expressing concern that the planes could also be used to help terrorist groups.

“The Islamic Revolutionary Guard Corps (IRGC) systematically uses commercial aircraft to transport troops, weapons, military-related parts, rockets, and missiles to hostile actors around the world, including, but not limited to, Hezbollah, Hamas, Islamic Jihad, the Houthi Rebels in Yemen, and the Bashar Al-Assad Regime in Syria," they wrote.

“These terrorist groups and rogue regimes have American blood on their hands. Your potential customers do as well,” the lawmakers wrote.

While the amendments gained significant bipartisan support, Rep. Jose Serrano, D-N.Y., opposed the measure saying it was part of a Republican plan to make the nuclear agreement, and the Obama administration, look bad.