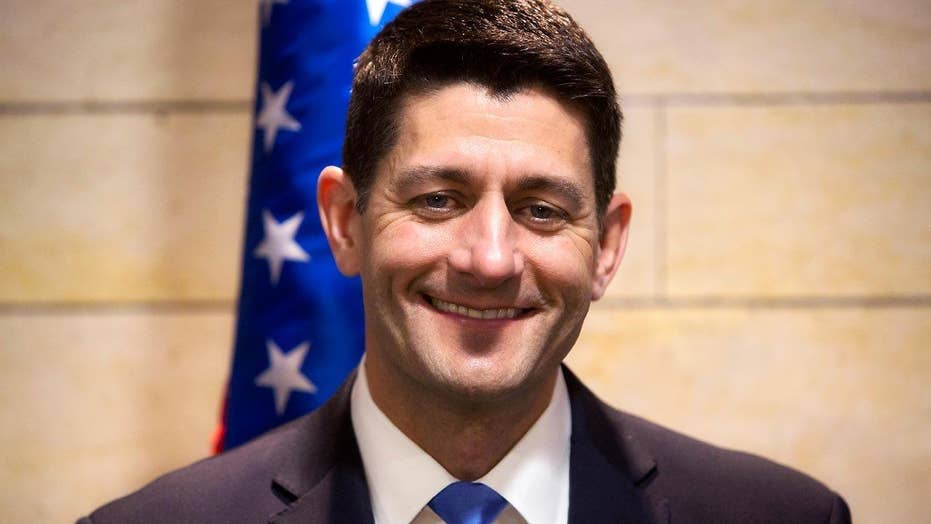 House Speaker releases new video that some observers believe looks a lot like a campaign ad. Amid contested convention buzz, is he considering a White House run? 'On the Record' panel weighs in

There was Hampton. My feisty, tri-colored Welsh Corgi who never met a Cheez-It he didn’t like.

On more than one occasion, the undersized Hampton somehow wrapped a raggedy blanket around the rods of my Bowflex, managing to lug the entire apparatus from the den into the hall with his jaws – just to show off how strong he was.

Hampton lived to the ripe age of 16-and-a-half and left us a few years ago. But from time to, Hampton plunged himself into trouble. He tore something up. Devoured the mail (including a paycheck once). I would stare at Hampton and admonish him. I’d present Hampton with the violated item and inquire if he “did this” or was responsible.

And Hampton would simply look away. Stare off into the distance. Nothing to see here …

Hampton thought if he didn’t look at me, then well, I wasn’t there. Like a 5-year-old, Hampton’s solution was to deny the problem and maybe, prayerfully, it would melt away.

Such was the case for months with many congressional Republicans and the possibility that Donald Trump might emerge as the GOP presidential nominee.

Anyone have any Cheez-Its?

Elisabeth Kubler-Ross argued there are five stages of grief in her 1969 book “On Death and Dying.”

Denial is one. So is isolation. Acceptance is the fifth stage.

It’s almost fashionable now to describe many congressional Republicans as ascending to the acceptance level. Some are concerned it’s a fait accompli that Trump, a billionaire businessman, will secure the Republican nomination either now or after a potentially-raucous, convention in Cleveland.

Kubler-Ross says some resist the fifth level. But resistance only prolongs the healing process.

Self-immolation may consume the Republican Party now. But in politics, there could well be a sixth stage of grief. It’s far more complex and especially nebulous.

This stage is called “everyone-for-themselves-and-whatever-in-the-world-works-for-you-go-do-it-because-we’ve-never-really-been-here-before-and-we-have-NO-idea-what-the-hell-is-going-on-or-how-to-resolve-it.”

Senate Majority Leader Mitch McConnell, R-Ky., may have first christened this stage, commonly referred to as the “hot rock” approach.

McConnell predicted GOPers would dispose of Trump “like a hot rock” if his combative, coarse rhetoric proved problematic for the GOP to maintain its Senate majority.

After all, Republicans now enjoy a 54-46 edge in the Senate (two independent senators caucus with the Democrats). The 2016 election map doesn’t do Republicans any favors as the GOP holds many of the most competitive Senate seats this cycle. Therefore, everyone should do whatever enables them to come to grips with this new reality -- and get re-elected.

But that doesn’t mean there’s buy-in.

Former House Speaker Newt Gingrich, R-Ga., huddled recently with House Republican chiefs of staff at a retreat. Gingrich told the Capitol Hill bosses they need to brace themselves for Trump -- because they weren’t ready for the reality of his nomination.

In fact, Fox is told there are anywhere from five to 10 House Republicans who may not cast a ballot for president this year if Trump is the party nominee. That number could grow, depending on the nominee. And many Republican lawmakers might not even attend the convention in Cleveland.

Trump’s team plans the first of multiple sessions with congressional backers on Capitol Hill next week. Barletta thinks some of his colleagues are making a mistake by not supporting Trump.

“They should be looking at why he’s so popular,” he said. “The fact that the party isn’t getting behind him worries me. We could have a divided party.”

Barletta said his “Facebook now is blowing up” in favor of his decision to get behind Trump.

“He’s someone from the outside (who) scares people in Washington,” he said.

Rep. Scott DesJarlais, R-Tenn., echoed Barletta, saying congressional Republicans “need to get used to the idea” of Trump leading the party in November.

Rep. Renee Ellmers, R-N.C. is the only female lawmaker behind Trump. That surprises many, considering Trump’s comments about women.

“I know he’s made some off-the-cuff-comments. I certainly don’t condone them,” Ellmers said. “As a Republican, we need to concentrate on things we agree with. We need to come together in a unified party.”

That’s the internal struggle vexing so many Republicans.

It’s why some Republicans hope the “Never Trump” movement succeeds. Some are now behind Texas GOP Sen. Ted Cruz, which is remarkable considering Cruz has made few friends among his Senate colleagues and engineered the 2013 government shutdown.

But some Republicans are now in the Cruz camp simply because his surname isn’t Trump. Some think advocating for Cruz helps split the party, bolstering chances for a contested convention in Cleveland. That could harm Trump and maybe give someone else a shot.

“It won't surprise any of you to know, I’d like to elect a president and I'm hoping this process leads to nominating somebody who can win election,” McConnell said.

At the behest of the other GOP White House candidate, Ohio Gov. John Kasich, Sen. Rob Portman, R-Ohio, orchestrated a conclave with Republican political operatives on Capitol Hill this past week. Portman said he wasn’t there to talk about strategy. Just talk about the merits of Kasich.

“Kasich is the best choice to unify,” Portman said. “He has the best poll numbers against Hillary Clinton, or for that matter, (Sen.) Bernie Sanders,” the Vermont Independent.

And then, there is the geosynchronous, potential presidential orbit of House Speaker Paul Ryan, R-Wis., -- especially at a multi-ballot convention.

Sen. Orrin Hatch, R-Utah, fueled some of the “in-case-of-emergency-break-glass-and-pick-Ryan-as-the nominee” talk this week. He said “speculation” about Ryan was “natural.”.

“He’s one of the great leaders here on Capitol Hill and one who brings both sides, all sides, together,” Hatch said.

Ryan and his team are exhausted trying to quash this chatter. Ryan repeatedly said he’s not running for president and that the nominee should come from the current field of candidates. But multiple observers note that Ryan still hasn’t uttered a “Sherman-esque” rebuke.

There was an effort to draft Civil War General William Tecumseh Sherman to run for president in 1884. Sherman didn’t, famously snubbing his suitors by saying, “I will not accept if nominated and will not serve if elected.”

Hence the origin of a “Sherman-esque pledge.”

“While I am grateful for the encouragement I’ve received, I will not be a candidate,” Ryan said about the speaker vacancy.

However, a possible white knight scenario lingers for Ryan. And the speaker’s office certainly stokes these embers with impressive videos like this one:

The sophisticated video is a kinetic cut of Ryan’s March speech to congressional interns in the historic House Ways and Means Committee hearing room.

The film only runs 39 seconds. But it entails 24 edits, cinematically hopscotching from frame to frame. Many shots don’t appear on screen for more than a second. No shot lasts more than three seconds until the camera locks on the speaker as he laments the politics of division.

The video speeds up b-roll of interns filing into the room. It starts with tinny, compressed audio of Ryan’s remarks that then morphs into stereo-quality sound.

But it’s not just how the video is edited. It’s how the video is shot. It features pans of the audience. The final shot drops down from Ryan and onto a sandwich board affixed to the lectern. It reads “@SpeakerRyan #ConfidentAmerica.”

Camera placement captures the most dramatic moment of the entire presentation. Ryan’s team positioned one camera behind the speaker, high above the Ways and Means dais.

That shot reveals Ryan from the back, his arms extended, revealing the enormity of the crowd -- as well as a phalanx of TV cameras and still photographers.

“It’s hard to imagine someone not at least attempting to place Ryan’s name in nomination should this get to a second ballot in Cleveland,” said one knowledgeable Republican source.

Angst will likely only fuel speculation between now and July. Perhaps Republicans have at least reached the fifth stage of grief that Kubler-Ross wrote about: acceptance.

Nobody has any clue how this will go down. Nobody has any idea what this means for House and Senate contests. But perhaps Republicans have hit that fifth level of acceptance.

Acceptance that things are going to be chaotic for a while.

And if you’re stress eating, go grab some Cheez-Its.