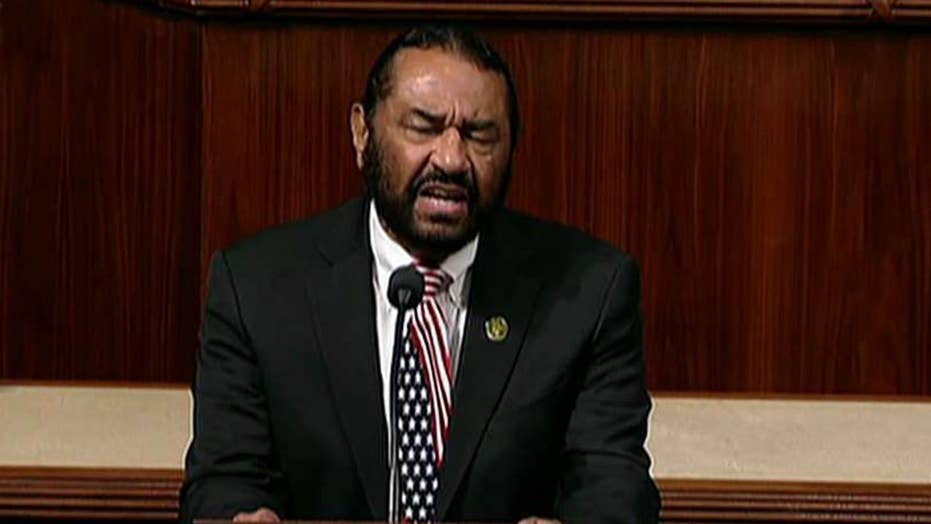 Columnist Mark Steyn sounds off on the latest attack from Rep. Al Green.

Several House Democrats on Wednesday filed articles of impeachment against President Trump, arguing their commitment to voters matters more than party leaders’ fears that the anti-Trump push could backfire.

“Everywhere I go in my district, people are calling for this,” said New York Rep. Adriano Espaillat, one of a handful of House Democrats who joined Tennessee Rep. Steve Cohen in announcing efforts to impeach the Republican president.

Cohen has filed four articles of impeachment accusing Trump of obstruction of justice, illegally profiting while president off domestic and foreign enterprises, and undermining the judiciary system and freedom of the press.

“He’s used the presidency to line his pockets with money,” Illinois Democratic Rep. Luis Gutierrez, who also supports the impeachment effort, said at Cohen’s Capitol Hill press conference. “I came here to be independent, not a backdoor Washington” politician.

Cohen is asking the Republican-led House Judiciary Committee to hold hearings on the filings, instead of forcing the full chamber to vote right away on impeachment.

“It’s time for Congress to take action to stop this reckless and harmful behavior by removing Mr. Trump from office and to defend and uphold the Constitution of the United States,” said Cohen, who was flanked by Espaillat, Gutierrez and fellow Democratic Rep. Al Green.

Green has previously led the impeachment charge, threatening last month to file the articles, only to change his mind.

Cohen said at least five other House Democrats have said they “want to or will” join his effort, including Reps. Marcia Fudge, of Ohio, and John Yarmuth, of Kentucky.

Mega-donor Tom Steyer is trying to stoke public sentiment to impeach Trump with a multi-million dollar TV ad campaign. And California Democratic Rep. Maxine Waters continues to rally similar support -- most recently at a Glamour magazine event Monday night in New York when she asked atendees to chant with her, “Impeach him. Impeach Trump.”

However, Democrats’ top two congressional leaders have warned against joining the impeachment wave, ahead of the 2018 elections in which they hope to win control of the House and cut into Republicans’ Senate majority.

“There may be a time. It is premature,” the New York Democrat recently told The Daily Beast. “And to call for [impeachment] now you might blow your shot when it has a better chance of happening.”

Democratic National Committee Chairman Tom Perez this past weekend also publicly opposed the plan and was hand-offs about Steyer’s efforts.

Cohen acknowledged Wednesday that he has only limited support among House Democrats and said he’s spoken briefly with Steyer and Pelosi, with whom he spoke after the deadly Charlottesville, Va., violence that started with a white supremacist rally.

“She understands,” he said. “I think this will not hurt the Democrats in 2018. … The Democratic base needs to be activated. [They] need to know members of Congress are willing to stand up to this president.”