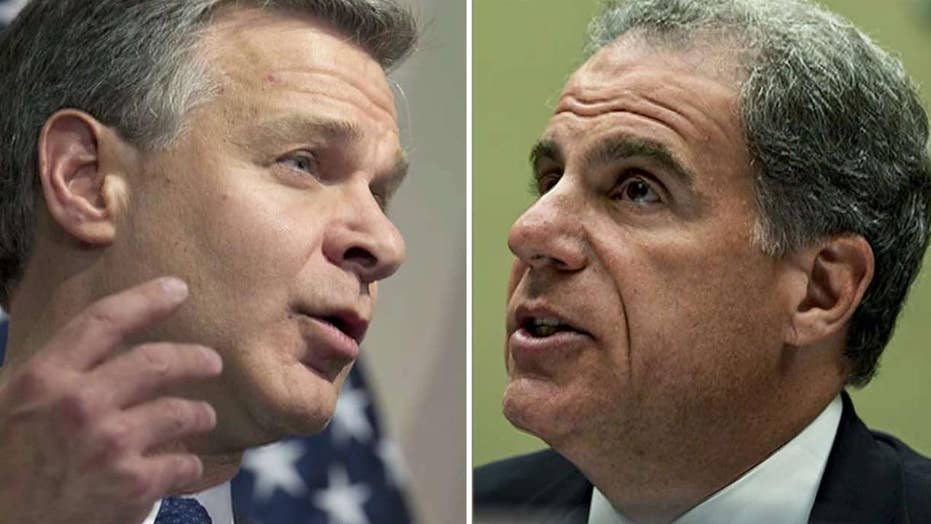 What narrative will play out when Horowitz, Wray testify?

FBI Director Christopher Wray and Justice Department Inspector General Michael Horowitz are expected to be the centers of attention Monday when they testify before the Senate Judiciary Committee on Horowitz's bombshell report on the FBI's investigation of Hillary Clinton's personal email server.

However, the report also noted the FBI's decision not to prosecute Clinton in July 2016 was not motivated by political bias against then-candidate Donald Trump.

In one text exchange from August 2016, Page texted Strzok: "[Trump’s] not ever going to become president, right? Right?!"

Another FBI attorney, who was the primary attorney assigned to Special Counsel Robert Mueller's Russia investigation until this past February, messaged an FBI employee the day after Trump's election as president that he was "just devastated."

"I just can't imagine the systematic disassembly of the progress we made over the last 8 years," the attorney, dubbed "FBI Attorney 2" in the report, later added.

However, the watchdog found that "no evidence that the conclusions by the prosecutors were affected by bias or other improper considerations."

"The question I have [is] was the Department of Justice and the FBI, the people in charge of the Clinton investigation, were they really in the tank or not?" Judiciary Committee member Lindsey Graham, R-S.C., said on Thursday. "We'll see what the conclusions are and I will challenge Mr. Horowitz [on whether] his conclusion that they weren’t in the tank makes sense. Time will tell."

Horowitz also found that Comey had been "insubordinate" in announcing that Clinton would not be charged without informing then-Attorney General Loretta Lynch that he planned to do so.

In an ironic twist, Horowitz also found that Comey himself conducted FBI business using his personal email account in a manner "inconsistent with Department policy."

During the hearing set for Monday afternoon, Republicans on the committee are likely to grill current FBI Director Christopher Wray, who insisted Thursday that "nothing in the report impugns the integrity of our workforce as a whole, or the FBI as an institution."

Wray told reporters that while he accepted Horowitz's findings, he noted that the report only concerned "a specific set of events back in 2016, and a small number of FBI employees connected with those events."