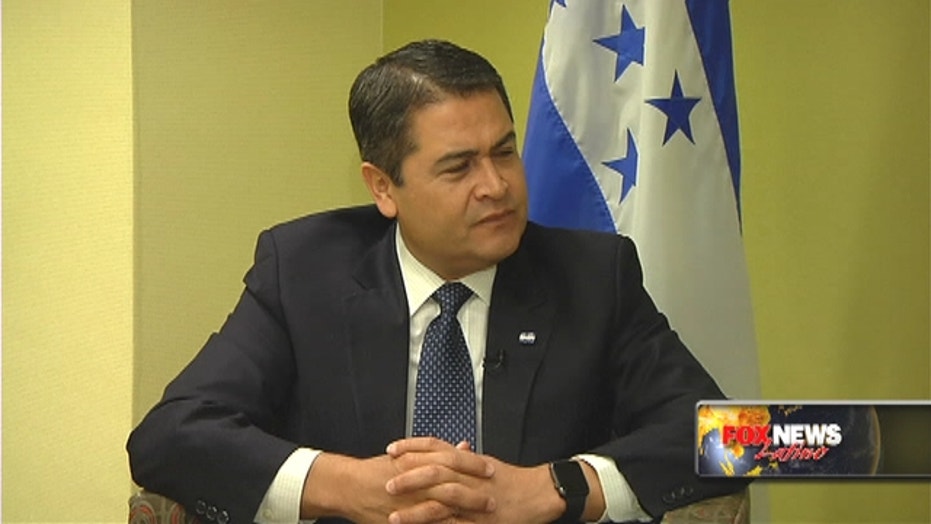 South America, he said, is producing the drugs and North America is consuming them. His country, which is dealing with record-breaking violence and mass poverty, is caught in the middle of the drug corridor — and has to deal with the dire consequences.

And yet, his country gets blamed for the problem and left alone to scramble for a solution.

"We have to tackle the issue of violence that is generated when drug trafficking moves across Central America," he said. "Because we Central Americans have to deal with a problem that is not ours. We do not produce drugs, they are produced in South America and consumed in North America.”

The president said he understands there needs to be a solution to the immigration problem – but the suggestion that have been bantered about, he said, will not work.

Hernandez said a huge fence across the border is not the answer. He said most people who come to the U.S. seek to work hard. And contrary to popular perception, Hernandez said, “migration is not a solely Latino phenomenon. Look at Syrian refugees fleeing to Europe.”

Instead of reacting to the flow of migrants, Hernandez said, and demonizing them, it is more logical and productive to shift the focus on the root of the problem – what sociologists call the pull-push factors of immigration.

"Emigration is something that occurs not only in the American continent, look at the case of Syria right now, look at Europe, look how they are also coming by sea into Europe and how much tragedy this has generated," Hernandez said. "So I am among those who believe that great solutions are to be found if we attack the root of the problem behind emigration."

“We need to look at the factors that propels people to leave their countries, and come up with good solutions.”

Hernandez said it is difficult, on a personal level and as president, to see people desperate to leave his country.

Hernandez has asked for international assistance since last year, when tens of thousands of undocumented immigrants, many of them unaccompanied  minors, showed up at the border, overwhelming the Border Patrol and various agencies that handle unexpected immigrant flows.

"If you look at the root of the problem, you’ll realize that your country has enormous responsibility for this," Hernandez said in an interview last year with The Washington Post.

Hernandez has met with President Obama, Vice President Biden and members of Congress to discuss the mass migration from his nation.

"The U.S. sees the use of drugs as a health crisis. For us, it’s tied to the violence in our country, the corruption. The criminal world has replaced the government.”

Meanwhile, back in his home country, Hernandez has faced challenges, which have included a march by thousands of citizens calling for his resignation.

Hernandez admitted that his 2013 presidential campaign unknowingly accepted donations that appear to have been linked to the groups embroiled in the scandal.