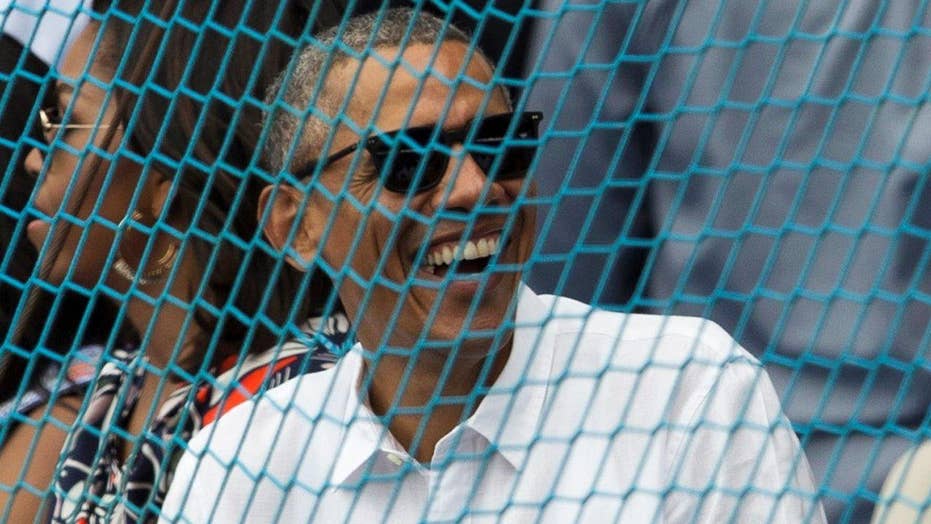 Obama criticized for his handling of Brussels terror attacks

Should the president have returned to the U.S.?

A day after facing criticism for attending a U.S.-Cuba ballgame in the aftermath of the deadly Brussels terror attacks, President Obama defended his public response to the Islamic State’s latest rampage – while insisting that taking out the terror network is his “top priority.”

“This is my No. 1 priority,” Obama said Wednesday, speaking at a joint press conference with Argentine President Mauricio Macri in Buenos Aires. “I’ve got a lot of things on my plate, but my top priority is to defeat ISIL, and to eliminate the scourge of this barbaric terrorism.”

The president, who has faced pressure before to demonstrate a greater sense of urgency in response to terror attacks, said he understands the fear caused by scenes like the massacre at the Brussels airport and subway, where at least 31 were killed and hundreds were injured. He said “it horrifies me” as well.

And he defended his handling of the aftermath by once again arguing that ISIS should not be allowed to disrupt Americans’ lives -- including his own.

Obama specifically had been criticized for going through with plans to attend a U.S.-Cuba baseball game with Raul Castro in Havana. While the event featured a moment of silence – and Obama briefly addressed the attacks during a speech earlier in the day – some Republicans said he should have reconsidered his Cuba schedule in light of the attacks.

“This is an attack on the heart of Europe, and the idea that we’re just going to be kind of clever here and not try to draw attention I think is a big mistake,” the Ohio governor told Fox News on Tuesday. “If I were president, I would have come home.”

Obama, though, stuck to the program and continued on to Argentina after his historic Cuba trip.

At the press conference, he said his administration is carefully considering “every strategy possible” to defeat ISIS, claiming the ongoing airstrikes and special ops partnerships with Iraqi security forces are working.

He also swatted down a suggestion Tuesday by GOP presidential candidate Ted Cruz to “patrol and secure” Muslim neighborhoods.

Obama called the idea of such surveillance “wrong and un-American.”

The Cruz campaign late Tuesday clarified the comments, saying he was talking about ensuring an “empowered, visible law enforcement presence that will both identify problem spots and partner with non-radical Americans who want to protect their homes” and giving police “every tool available to follow leads and take action against those who would do us harm.”

Shortly after Obama spoke in Argentina, the State Department confirmed that Secretary of State John Kerry will travel Friday to Brussels, Belgium, to “formally express the condolences of the United States for the loss of life” in the attacks.

“He will  reiterate the strong support of the United States for Belgian efforts to both investigate these attacks and continue contributing to international efforts to counter violent extremism,” spokesman John Kirby said in a statement.

On Capitol Hill, House Intelligence Committee Chairman Devin Nunes, R-Calif., underscored the danger, saying the U.S. is at the highest threat level since 9/11. He also said it’s possible that the Brussels attacks were a “proxy” effort to “target Americans” in the country.

The State Department has said about a dozen Americans were injured in the attacks, while at least four U.S. citizens remain unaccounted for.