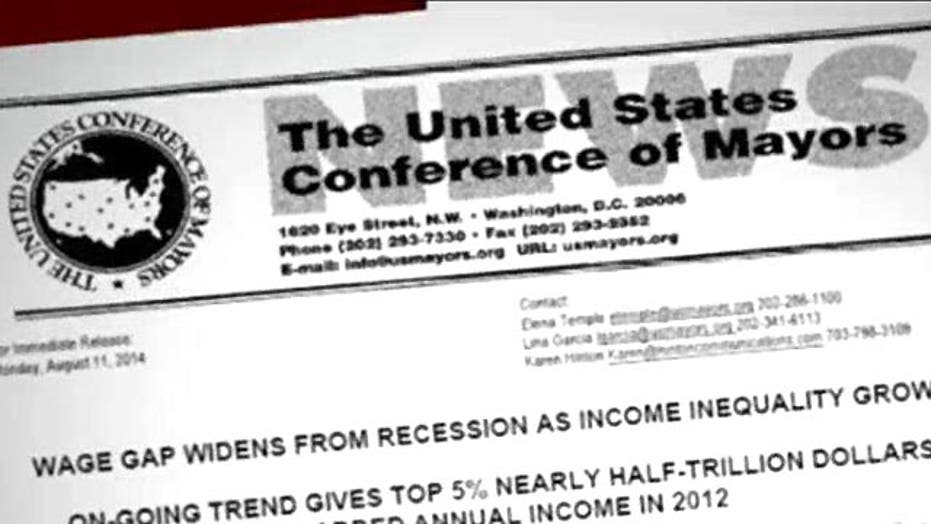 Country's mayors weigh in on economy in new report

“You know what?” President Obama asked during a White House news conference this month. “What we did worked. And the economy is better.”

As usual, however, the “dismal science” of economics has spewed forth this week a slew of reports and studies that tend to contradict each other, and cast doubt on the strength of the American economy.

A report commissioned by the U.S. Conference of Mayors finds the United States has finally regained all the jobs lost during the so-called Great Recession, which commenced at the end of 2007 – but that the money workers are earning now is far less than what they used to take home.

Such findings undercut the importance of claims like those President Obama advanced in that same Aug. 1 news conference, where he said: “We are now in a six-month streak with at least 200,000 new jobs each month.  That's the first time that has happened since 1997.” He added:  “Over the past year, we’ve added more jobs than any year since 2006.”

The question is whether the jobs being created in America are well-paying enough to support the families and households dependent on them.

“[The IHS] report is not surprising,” said Pamela Villareal, a Dallas-based economist with the National Center for Policy Analysis. “When you look at the sectors of the economy that have grown since, say, 2011, a lot of the growth has occurred in retail, food service, hospitality. These are sectors that typically pay lower wages. … What we really need is more growth in the higher-paying high-tech jobs, and that could be accomplished by reducing some of the regulations and some of the taxes that are discouraging job growth here in the United States.”

Another finding of the IHS report for the nation’s mayors, validating earlier studies performed elsewhere, shows income inequality – defined as the unequal distribution of income across the various participants in the economy – has grown during the recovery from the Great Recession.

“I suppose there is,” replied IHS economist Jim Diffley, when asked if there wasn’t an irony in the fact that Obama has cited the combating of income inequality as one of his top economic priorities. However, Diffley noted that the trend of the rich growing richer, and the poor growing poorer, extends back decades. The top 20 percent of income-earning households in 1975 took home 43.6 percent of all income earned in the United States, the study finds, while that same top quintile of households now takes home 51 percent of all income.

“There's no particular policies of this administration that drove that change that we can identify,” Diffley told Fox News. “It tells you about the structure of the economy as it's evolved over time, over a much longer time than, than Barack Obama has been president. … I often say about presidents and governors that they get too much credit when the economy is good and too much blame when the economy is bad.”