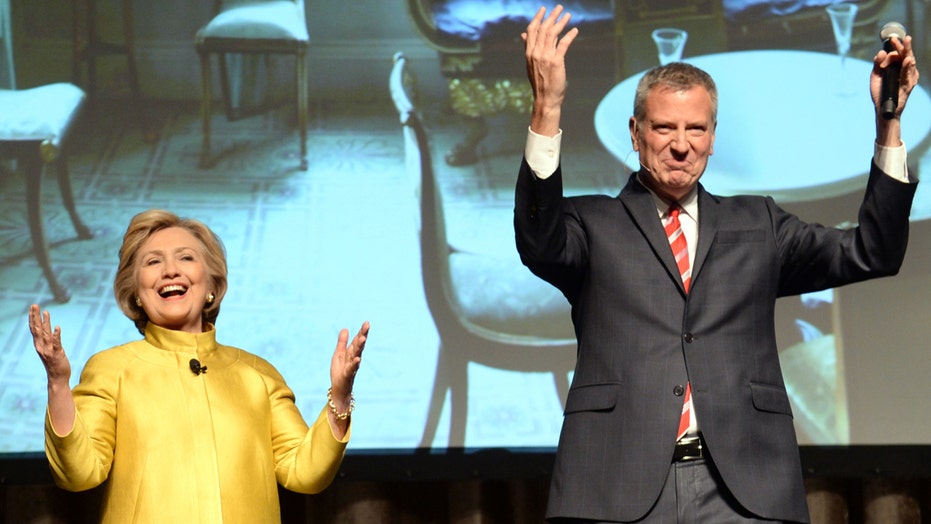 New York City Mayor Bill de Blasio and Democratic presidential front-runner Hillary Clinton were forced to defend a joke made by the mayor at a charity dinner that critics considered racially offensive.

The incident occurred Saturday night, when Clinton and De Blasio took part in a skit at the Inner Circle dinner, a black-tie event in which New York City's political press corps and politicians spend the evening making fun of each other.

Clinton took the stage ostensibly to thank De Blasio, a former aide, for his belated endorsement of her for the Democratic nomination.

De Blasio responded, "Sorry, Hillary. I was running on C.P. time." The phrase, popular in pop culture, is a reference to the stereotype that African-Americans are typically late for appointments.

Broadway actor Leslie Odom Jr., who was also on stage with Clinton and De Blasio and appeared to be in on the joke, said, "That's not - I don't like jokes about that, Bill."

Clinton then turned to Odom and delivered the punch line, "Cautious Politician Time. I've been there."

The exchange takes place at the 8:30 mark of this video, posted on the NYC Mayor's Office YouTube channel.

The joke was widely criticized in the media, with New York magazine calling it "amazingly unfunny, terribly executed". Left-leaning website Salon called it "cringeworthy", as did The Root, which bills itself as a site for "Black News, Opinion, Politics, and Culture."

The skit came at an awkward time for Clinton, who has ridden strong African-American support to several wins in key primary states but has also been criticized by some for using the term "superpredator" during her husband's administration to describe criminals.

Last week, former President Bill Clinton clashed with Black Lives Matter activist and defending his criminal justice policies at an appearance in Pennsylvania. Hours before her Inner Circle appearance, Hillary Clinton told the New York Daily News that she also agreed with critics who say the bill contributed to high levels of incarceration for non-violent crimes, like drug offenses.

De Blasio told CNN Monday evening that critics of the skit were "missing the point."

It was clearly a staged show. It was a scripted show and the whole idea was to do the counter intuitive and say 'cautious politician time,'" he said. "Every actor involved, including Hillary Clinton and Leslie Odom Jr., thought it was a joke on a different convention."

A Clinton spokesman said in a statement to ABC News, "We agree with the mayor."