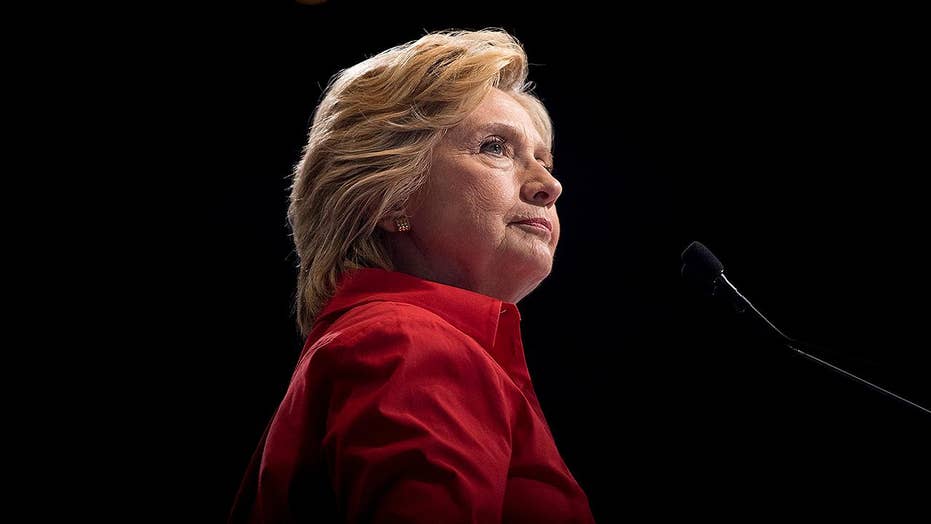 Hillary Clinton attempts to explain why she didn't fire aide

Clinton faces mounting criticism for not firing Burns Strider, a top aide to Clinton's 2008 presidential campaign who was accused of sexual misconduct by a young woman on the staff; reaction and analysis from Hugo Gurdon, editorial director at The Washington Examiner.

Minutes before President Trump’s first State of the Union address, Hillary Clinton issued a detailed explanation on why she didn’t fire a senior adviser to her 2008 presidential campaign after he allegedly sexually harassed a female staffer.

The post came amid bipartisan criticism of her initial response to the controversy late last week.

In a lengthy Facebook post, Clinton said Tuesday she understands why she's being asked why she let the staffer "keep his job despite his inappropriate workplace behavior."

"The short answer is this: If I had it to do again, I wouldn’t," she said.

But Clinton said she believes in “second chances” and didn’t want to completely terminate his employment. Instead, Clinton said she demoted him and “put in place technical barriers to his emailing" his accuser.

“In this case, while there were no further complaints against him for the duration of the campaign, several years after working for me he was terminated from another job for inappropriate behavior,” Clinton said. “That reoccurrence troubles me greatly, and it alone makes clear that the lesson I hoped he had learned while working for me went unheeded.

“Would he have done better – been better – if I had fired him? Would he have gotten that next job? There is no way I can go back 10 years and know the answers. But you can bet I’m asking myself these questions right now.”

While Clinton did not name the male employee in her explanation, The New York Times reported last week that Clinton intervened to keep Burns Strider, who worked as her faith adviser, with her team. BuzzFeed News reported that Strider allegedly harassed multiple women at a pro-Clinton super PAC years later.

Clinton had faced criticism over her handling of the sexual misconduct allegations since Friday, when The New York Times first reported on the harassment scandal.

In response to the report, a spokesman for Clinton gave Fox News a statement from the law firm that represented the 2008 campaign.

“To ensure a safe working environment, the campaign had a process to address complaints of misconduct and harassment,” a statement from Urecht, Kleinfeld, Fiori, Partners said. “When matters arose, they were reviewed in accordance with these policies, and appropriate action was taken. This complaint was no exception.”

"We can acknowledge that even those of us who have spent much of our life thinking about gender issues and who have firsthand experiences of navigating a male-dominated industry or career may not always get it right."

Clinton said Tuesday that she spoke to the alleged victim following the recent news coverage – and the accuser told Clinton that she “felt supported back then.”

“She expressed appreciation that she worked on a campaign where she knew she could come forward without fear. She was glad that her accusations were taken seriously, that there was a clear process in place for dealing with harassment, and that it was followed,” Clinton said.

The former secretary of state added that she shared her explanation with her former employee, who gave her permission to post it publicly.

In her statement, Clinton mentioned that she, too, has experienced sexual harassment. She wrote about the experiences in her memoir, she said, because she does not “want this behavior or these attitudes to be accepted as ‘normal’ for any women, especially those just starting out in their lives.”

"We can’t go back, but we can certainly look back, informed by the present. We can acknowledge that even those of us who have spent much of our life thinking about gender issues and who have firsthand experiences of navigating a male-dominated industry or career may not always get it right," Clinton said.

She concluded her statement by expressing her desire for women to “continue to talk and write about their own experiences and that they will continue leading this critical debate, which, done right, will lead to a better, fairer, safer country for us all.”

After Trump finished his State of the Union address, Clinton teased her Facebook statement in a tweet, saying it's about "an issue you didn't hear a single word about tonight."