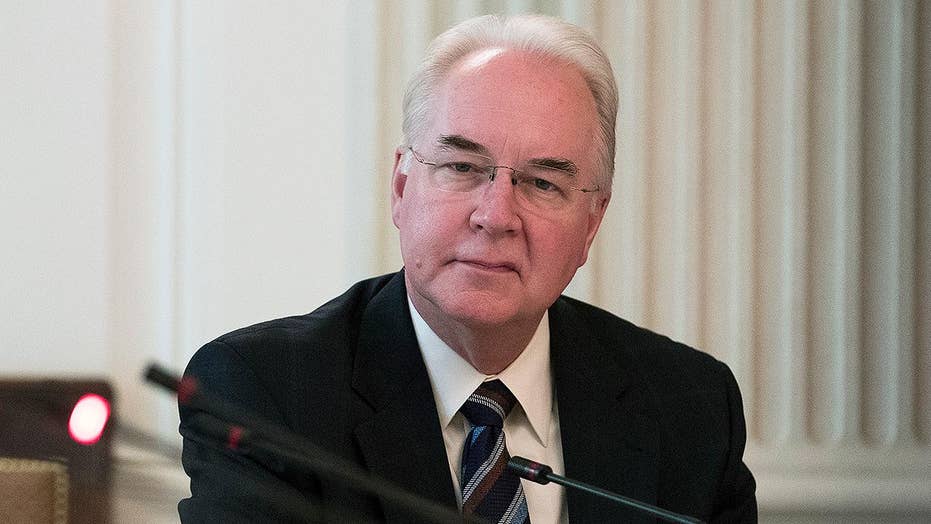 The White House said Trump will designate Don J. Wright as acting secretary. Wright currently serves as deputy assistant secretary for health and director of the Office of Disease Prevention and Health Promotion.

President Trump for days has given indications he was considering firing Price over the plane controversy. Shortly before the brief White House statement late Friday, the president told reporters, “He’s a very fine man, but we’re going to make a decision sometime tonight.”

Politico reported that he also took a government-funded private jet in August to St. Simons Island, a Georgia resort where his family owns land, ahead of an address at a medical conference.

The outlet also reported this week that he took military aircraft for official trips to Africa, Europe and Asia, costing taxpayers more than $500,000.

Price said Thursday that he would reimburse the government for a portion of the costly charter flights he used to travel to various engagements at taxpayer expense.

Senior department sources told Fox News that the total amount of money Price will repay is $51,887.31, though that represents a fraction of the total cost.

"[It's] never been done, to our understanding, before by a secretary, in spite of the fact that previous administrations have had secretaries that flew an awful lot," Price said.

Price vowed in a statement, before his resignation, that "I will take no more private charter flights as Secretary of HHS. No exceptions."

Price, a physician, served as a Republican member of Congress from Georgia before joining the Trump administration.

In his resignation letter to the president, Price said HHS “is working aggressively to improve the health and well-being of all Americans."

“I regret that the recent events have created a distraction from these important objectives,” Price said. “Success on these issues is more important than any one person.”

Price was a key figure in the Trump administration's push to overhaul ObamaCare. But, while Trump indicates he's going to keep fighting for a bill, the latest Senate Republican legislation collapsed on Tuesday for lack of support, after a prior effort collapsed over the summer.

The only other Trump Cabinet secretary to step down has been John Kelly, but he stayed in the administration -- leaving the Department of Homeland Security to become White House chief of staff after Reince Priebus resigned.

In a memo issued Friday evening to top officials, Mick Mulvaney, the president’s budget director, said the White House chief of staff has to now approve all travel on government-owned aircraft. Exempted from this are those required to fly on government planes for security reasons, like the secretary of defense and secretary of state.

“Every penny we spend comes from the taxpayer,” Mulvaney said. “We thus owe it to the taxpayer to work as hard managing that money wisely as the taxpayer must do to earn it in the first place. Put another way, just because something is legal doesn’t make it right.”


Speaking to reporters on Friday, the president referenced how officials with the Obama administration also used government planes.

According to statistics provided by a senior administration official, the Trump White House has authorized fewer trips on military planes for senior officials than the Obama administration did during the first eight months in office.

From Jan. 20 to Sept. 19, the Trump administration authorized 77 military flights, while the Obama administration allowed 94 flights during the same time period, according to the stats. Some of those trips were taken by Obama officials who were required to use government aircraft.