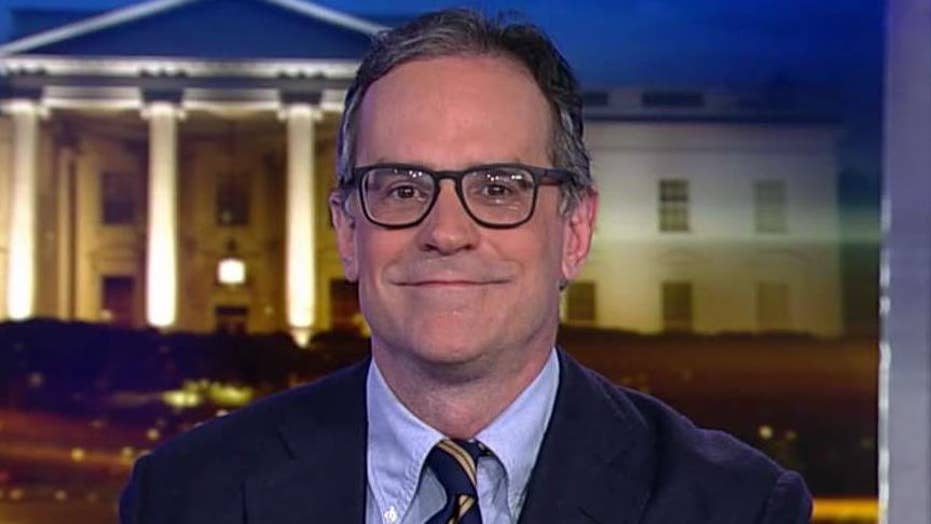 Michael Anton on the controversy over birthright citizenship

Top Republicans are pointing to an impassioned 1993 speech by then-Nevada Sen. Harry Reid, in which the future Democratic Senate majority leader argued that "no sane country" would award citizenship to children of illegal immigrants born on its soil and promoted his own legislation to end the practice here.

President Trump ignited a national debate on the topic this week when, speaking to "Axios on HBO," he announced his intention to use an executive order to end birthright citizenship, which he called "ridiculous."

In his speech, Reid concurred, although he advocated passing a law to enact the change -- one that would grant citizenship only to the children of mothers in the U.S. legally.

"If making it easy to be an illegal alien isn't enough, how about offering a reward for being an illegal immigrant? No sane country would do that, right?" Reid said. "Guess again. If you break our laws by entering this country without permission and give birth to a child, we reward that child with U.S. citizenship and guarantee a full access to all public and social services this society provides. And that's a lot of services."

He continued: "Is it any wonder that two-thirds of the babies born at taxpayer expense at country-run hospitals in Los Angeles are born to illegal alien mothers?"

"No sane country would do that, right?"

Reid reversed his position in 1999 and apologized for his stance, shortly after the union group AFL-CIO, which holds significant political sway nationally and in Nevada, changed its position to support birthright citizenship. The Las Vegas Review-Journal reported that Reid has since called his speech "way up high" on his "list of mistakes," and in 2006 he referred to it as a "low point" of his legislative career.

FORMER US ATTORNEY: TRUMP 'RIGHT ON THE SUBSTANCE' ON BIRTHRIGHT CITIZENSHIP, BUT EXECUTIVE ORDER IS WRONG APPROACH

Within hours of the clip surfacing, Republican leaders were quick to highlight Democrats' changing tune on immigration.

"Stopping the flow of illegal immigration used to be a bipartisan issue," GOP Chairwoman Ronna McDaniel wrote on Twitter. "But the Democrat leaders of today want to abolish ICE and open our borders."

In terms of giving unwitting political fodder for Republicans on immigration, Reid has some high-profile company. Earlier this month, President Trump gleefully quoted then-Sen. Barack Obama's comments in 2005, when he declared that "we simply cannot allow people to pour into the United States undetected, undocumented, unchecked and circumventing the line of people who are waiting patiently, diligently and lawfully to become immigrants into this country.” (Obama, in those comments, went on to advocate for providing some legal status for illegal immigrants.)

But not all Republicans are speaking with one voice after Trump's proposal. House Speaker Paul Ryan, R-Wisc., said Tuesday that Trump has no authority to use an executive order to unilaterally resolve the issue, which many legal experts say is controlled not only by the 14th Amendment, but also by the Immigration and Naturalization Act (INA) of 1952.

It might be possible, some conservatives argue, for a new law passed by Congress to revise the INA and still comport with the Constitution, which states that "all persons born or naturalized in the United States and subject to the jurisdiction thereof, are citizens of the United States and of the state wherein they reside."

Republicans are advancing the theory that illegal immigrants are not "subject to the jurisdiction" of the U.S. within the meaning of that provision, which would give Congress the legal daylight to pass a law codifying Trump's view.

"On substance, I believe President Trump is right on birthright citizenship — the 14th Amendment does not require it," wrote former U.S. Attorney Andrew McCarthy. "I do not believe, however, that the president may change the interpretation of the 14th Amendment, which has been in effect for decades, by executive order, as he is reportedly contemplating."

While the new 5-4 conservative majority on the Supreme Court might seem sympathetic to the president's interpretation, the change would mark an apparent, abrupt departure from tradition -- and tradition is what then-Supreme Court nominee Brett Kavanaugh cited as a guiding principle when interpreting the Constitution.