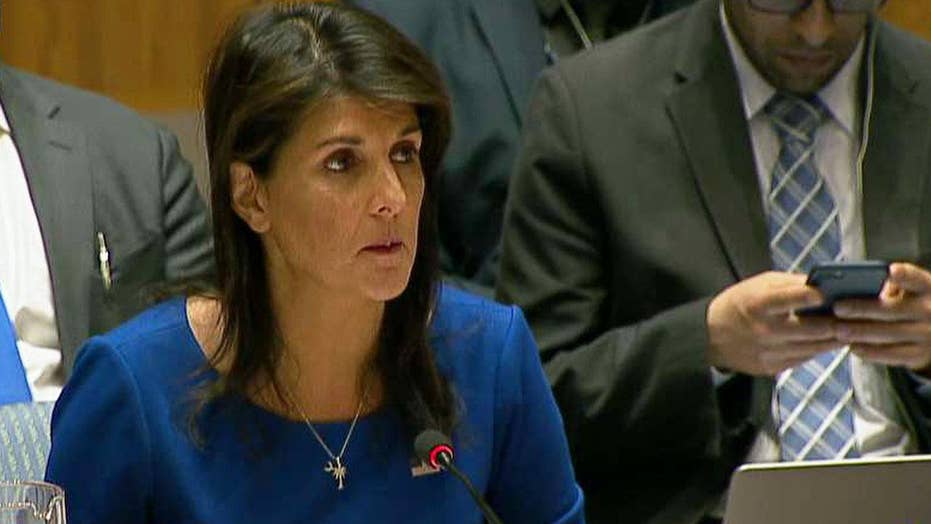 Haley on Syria strike: We gave diplomacy chance after chance

Haley made the remarks at a fiery meeting of the U.N. Security Council, in which Russia and the U.S. traded barbs over the decision of the U.S., France and the United Kingdom to launch strikes in Syria on Friday in response to the alleged use of chemical weapons last week in Douma. A draft resolution from Russia condemning the strike failed in a vote, with only Bolivia and China voting alongside Russia.

While the Trump administration has said the strikes are now over, with Trump declaring: “Mission Accomplished!” on Saturday morning, Haley warned in her remarks that should the Assad regime use such weapons again, strikes could resume.

"I spoke to President Trump this morning and he said if the Syrian regime uses this poisonous gas again, the United States is locked and loaded," she said.

In what may be seen as a jab at former President Barack Obama, who famously drew a red line on chemical weapons use in Syria in 2012 but was accused of failing to follow through, Haley promised that Trump would not waver: “When our president draws a red line, our president enforces the red line."

Her remarks came after Russian ambassador Vasily Nebenzia tore into the U.S. and its allies for the strikes, accusing them of an “illegal military adventure” and “hooliganism in international relations."

"You are constantly tempted by neo-colonialism,” he said. “You have nothing but disdain for the U.N. Charter and the Security Council which you are unjustifiably trying to use for your illicit aims.”

He also expressed doubt the claims about chemical weapons use by the Assad regime, suggesting it was a fabrication by the West as a pretext for intervention in the country.

“You want to throw this country back into the Stone Age,” he said. “You want to finish off what your sanctions haven’t achieved yet.”

Haley in turn dismissed what she said was a Russian disinformation campaign in full force.

“The pictures of dead children are not fake news,” she said.

Russia was also strongly criticized by ambassadors for the U.K. and France, with both officials criticizing Russian protection of the Assad regime and emphasizing the body of evidence that they say pointed to the Assad regime’s fingerprints on the chemical weapons attacks. They also pushed back on Russian claims that the strike was a breach of the U.N. Charter.

“I will take no lessons in international law from Russia,” U.K. ambassador Karen Pierce said in her remarks.

Secretary General Antonio Guterres urged member states to “show restraint in these dangerous circumstances and to avoid any acts that could escalate matters and worsen the suffering of the Syrian people.” He also described the use of chemical weapons as “abhorrent” and called on the Security Council to agree on a dedicated mechanism to assure accountability for chemical weapons use in Syria.

“A lack of accountability emboldens those who would use such weapons by providing them with the reassurance of impunity,” he said.

The Pentagon said that 105 missiles all hit their respective targets, destroying three of Assad’s chemical weapons facilities. A Pentagon spokesperson also warned of a Russian disinformation campaign, telling reporters that there has been a 2,000 percent increase in Russian trolls online in the last 24 hours.

On Saturday, State Department Press Secretary Heather Nauert said on "America's News Headquarters" that it is time for Russia to take responsibility in the region.

Vice President Mike Pence, speaking in Peru, said that the message to Russia was: "You're on the wrong side of history."