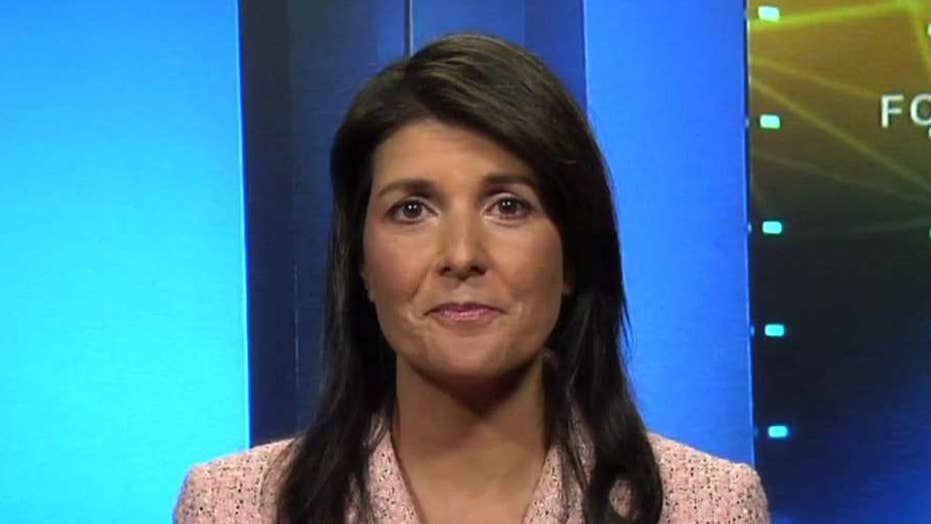 U.S. ambassador to the United Nations discusses U.S.-led strikes on the Assad regime in retaliation for suspected chemical weapons attack, future of U.S. policy toward Syria, Russia and Iran.

U.S. Ambassador to the United Nations Nikki Haley on Sunday defended President Trump’s declaration of “mission accomplished” in the Syria missile strikes, saying the president was talking in military terms about a singular task, not about foreign policy, while reinforcing that the “United States’ work in Syria is not done.”

“We all know our work in Syria is not done,” she told Fox News’ “Fox News Sunday.” “I can assure you that the president is watching.”

Haley also repeated her comment Saturday, at an emergency meeting of the United Nations Security Council, that the U.S. remains “locked and loaded.”

She spoke after the U.S. led an air-and-sea missile attack overnight Friday on the regime of Syrian President Bashar Assad, in response to his purported March 7 chemical attack on civilians, in the country’s years-long civil war.

She also acknowledged Sunday that relations between the U.S. and Russia, an Assad supporter, are “very strained.”

Trump has, since winning 2016 presidential campaign, suggested that if elected he would try to improve such diplomatic relations. But a series of events -- including Russia’s involvement in neighboring Ukraine and the recent poisoning of an ex-spy in Great Britain -- has strained the relationship, amid a federal investigation into Russia meddling in the 2016 White House race.

“This is something we are not going to tolerate,” Haley also said Sunday. Russia doesn't have "very good friends.”

She also suggested that Russia wasn’t helpful in pursing international diplomatic responses to the chemical attack, saying the 105 missiles launched by the U.S., France and the United Kingdom at three Syrian sites connected to the making and storing of chemical weapons “didn’t have to happen.”

“I think (the relationship) has been changing over time,” she said. “This is a very strained time.”