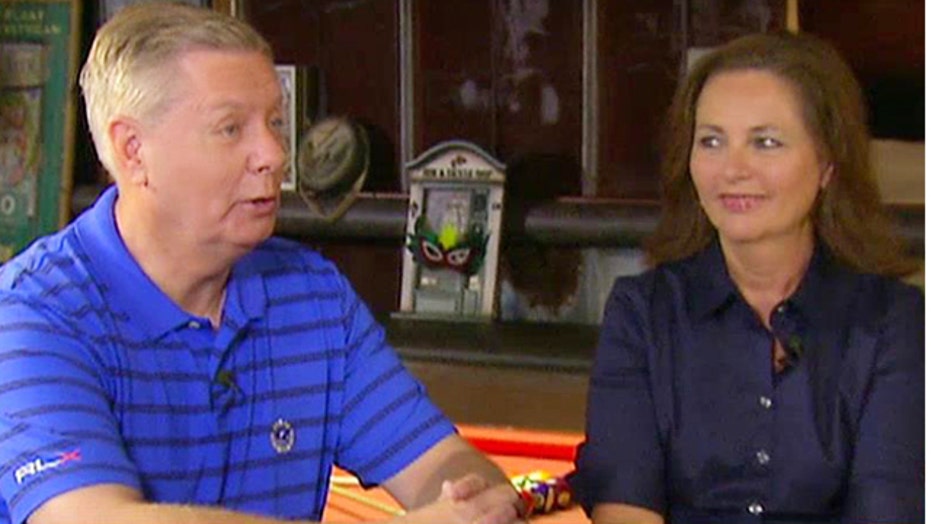 And then there were nine.

South Carolina Sen. Lindsey Graham added to the Republican Party's logistical challenges as he formally launched his 2016 presidential campaign -- becoming the ninth GOP primary candidate, with more than a half-dozen others still weighing a bid of their own.

South Carolina's senior senator made the announcement Monday in the small town of Central, where he grew up. The hawkish lawmaker made clear he will strive to make national security a centerpiece of his campaign, and the presidential race as a whole.

"I'm running for president of the United States," Graham said. "I want to be president to defeat the enemies that are trying to kill us -- not just penalize them or criticize them or contain them, but defeat them."

Graham said he has more experience on national security than any candidate in the race.

He quipped, "That includes you, Hillary."

Graham's entry, though, further swells the crowded Republican field, whose candidates will increasingly battle for not only votes but fundraising dollars. The crowded field also sets the stage for a chaotic debate season, where parties and networks hosting the forums are looking at ways to cap the number of candidates and keep the format manageable.

While Graham barely registers now in national polls that will be used to determine which candidates are invited to the primary debates beginning this summer, he argues Republican voters will ultimately reward him for his blunt talk about national security threats. He also hails from South Carolina, which holds the first-in-the-South GOP primary -- a strong performance there could fuel his presidential bid.

Graham is a three-term senator and Air Force lawyer, who is retiring from military service at the rank of colonel when he turns 60 this summer.

As his campaign ramps up, he is sure to blast Obama's withdrawal of troops from Iraq, insist on the need to strong-arm Iran over its nuclear program and work to subdue the violent Islamic State militants who have gained footholds in Iraq and Syria.

Yet in the early days of the 2016 campaign for president, Graham has already gone further than most of his rivals for the GOP nomination in saying how he would tackle such problems, while acknowledging the potential costs of his strategy.

Graham wants to put an additional 10,000-plus U.S. troops into Iraq, adding to the several thousand there now working as trainers and advisers only. He says it could take even more troops to stabilize the Middle East over time, adding "more American soldiers will die in Iraq and eventually in Syria to protect our homeland."

The Islamic State militants, Graham argued at a recent campaign stop, "want to purify their religion and they want to destroy ours and blow up Israel. Every day they get stronger over there, the more likely we are to get hit over here."

It's a calculated risk for the 59-year-old senator who surprised many when he began to hint earlier this year he would run for president.

A February poll conducted by the Pew Research Center found 63 percent of adults backed some kind of military campaign against the Islamic State group, compared to 30 percent who disapprove. When asked about using ground troops, support dropped to 47 percent -- with 49 percent opposed.

Graham's hawkish approach stands in stark contrast to his fellow U.S. senator and presidential candidate, Kentucky's Rand Paul, who favors less military intervention abroad. It's also notable for its specifics, especially his warning that U.S. troops are likely to perish in the Middle East as part of his approach.

While New Jersey Gov. Chris Christie said in a recent speech in Georgia that "we should work with our allies that want to stand against ISIS," he's described that role as helping with the "weapons, equipment and training" needed for a "long fight."

Wisconsin Gov. Scott Walker says he'd "take the fight to them before they take the fight to us," but he has yet to detail what that entails. Florida Sen. Marco Rubio, writing over the weekend in The Washington Post, said the U.S. should increase the number of American troops in Iraq, but unlike Graham, didn't say how many ought to deploy.