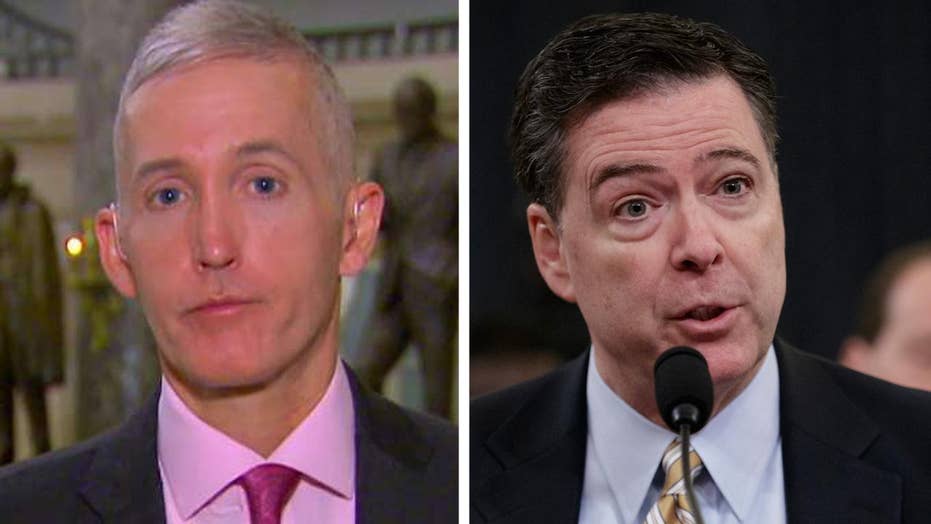 On 'Fox & Friends,' the GOP congressman reacts to the hearing on Russia

It’s a tough day to be James Comey.

The FBI director on Tuesday took shots from both sides of the political aisle, with the left blasting him for not disclosing an investigation into alleged Trump connections to Russia sooner and the right lambasting his evasive answers during Monday’s House Intelligence Committee hearing.

One of Comey’s Tuesday critics was one of his sharpest questioners the day before, and Rep. Trey Gowdy, R-S.C., was particularly upset that Comey failed to acknowledge a probe into the string of leaks that have plagued President Trump’s administration.

Gowdy – and several other Republicans on the Intelligence Committee – drew specific attention to the leaks that identified former National Security Adviser Michael Flynn as the U.S. citizen who had a conversation with a Russian official in December. Flynn initially lied about the incident, leading Trump to fire the longtime supporter.

Flynn’s conversation was reportedly captured in an intercept that only identified him as a U.S. citizen. During his questioning, Gowdy asked about several Obama administration officials who would have had access to Flynn’s name and would have been able to “unmask” him. Gowdy mentioned ex-Director of National Intelligence James Clapper, ex-CIA Director James Brennan, ex-Attorney General Loretta Lynch, ex-Acting Attorney General Sally Yates, ex-National Security Adviser Susan Rice and former Obama adviser Ben Rhodes. Gowdy also asked if former President Barack Obama was briefed about “calls involving Michael Flynn.”

“I’m trying to help the public, and Director Comey, kind of narrow down the universe of people who would have had access to that information to then leak it,” Gowdy said.

Gowdy, a former federal prosecutor, described how he hoped the leak of Flynn’s name – and other leaks of sensitive material – would be investigated.

“Out of the 320 million people in our country, there aren’t that many that would’ve had access to the information,” Gowdy said on “Mornings with Maria.” “So narrow the universe. Go interview the people. Phone records are helpful, email records are helpful – the same way you’d investigate any other crime. But you’ve got to want to do it. And you’ve got to view it seriously.

“He said he viewed it seriously. We’ll see.”