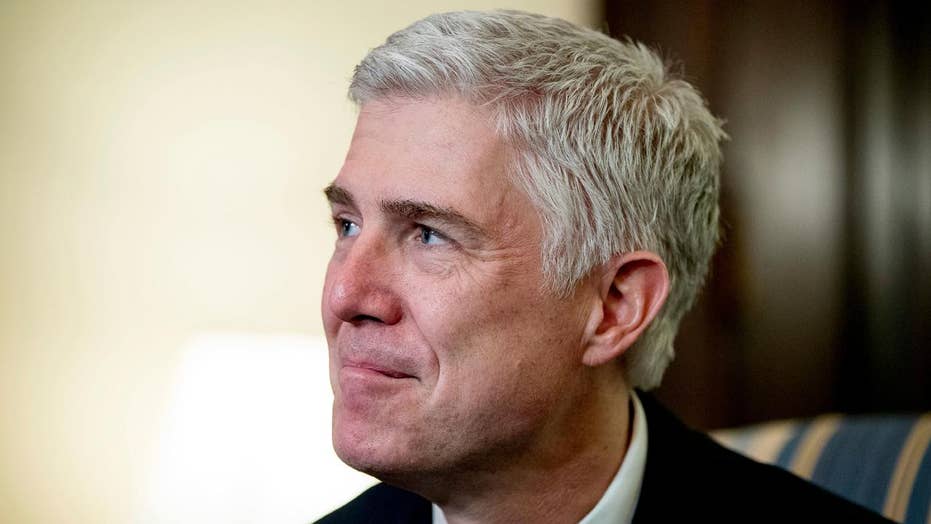 WASHINGTON – An upbeat Justice Neil Gorsuch wasted little time getting to work in his first public session Monday as the 113th member of the Supreme Court.

Sitting at the far right end of the nine-member bench, Gorsuch spent the morning hearing three oral arguments, each lasting about an hour. In his first case, considering a federal workplace discrimination claim, the newest justice was among the most active of questioners -- unusual for the court "rookie."

At the start of the morning session, Chief Justice John Roberts publicly acknowledged his new colleague in the crowded courtroom, wishing him a "long and happy career in our common calling."

Gorsuch responded by thanking the other justices for giving him a "warm welcome."

The 49-year-old Colorado native paid close attention to the arguments, sitting straight up and resting his hand occasionally on his chin.

He remained focused -- not even chatting with his "bench neighbor," Justice Sonia Sotomayor -- as he asked a number of questions of counsel. The back-and-forth exchanges lasted more than 10 minutes of the first 60-minute argument.

The first case out of the gate for Gorsuch was not a blockbuster, but the justice repeatedly pressed lawyers from both sides with his positions.

When one attorney admitted he tended to agree with the justice on one point, Gorsuch dryly replied, "I hope so."

At one point, he even apologized for the amount of questions, saying, “Sorry for taking up so much time.”

The other cases being argued separately Monday deal with a property rights dispute and securities class-action lawsuits.

Even before Monday's arguments, Gorsuch had begun settling in at the court, arranging his chambers to create a comfortable, efficient workplace. Reminders of his roots in Colorado and the West will grace his offices, along with plenty of photos of his family and friends.

He is allowed to hire secretaries, a messenger, and four law clerks -- who typically serve for one year.

Those clerks will be especially important helping the justice get up to speed on his caseload, since joining the court in the midst of the term is not standard. It will be a nonstop whirl of activity until the term effectively ends in late June.

All four of the law clerks brought on in recent days served previously for then-Judge Gorsuch, and are all experienced litigators or academics. Two of them later went on to clerk for Antonin Scalia (the late justice whose seat Gorsuch is now occupying) and Justice Sonia Sotomayor.

His colleagues are welcoming their newest member.

"We hope we're serving with Justice Gorsuch for the next 25 years," Roberts said last week before a university audience in New York. "It's kind of like a marriage. If you're going to be with someone that long, you can't have knock-down, drag-out fights over a case."

Food for thought for the newest member of the Supreme Court: being the junior justice has its benefits and challenges.

For Gorsuch, it will mean being assigned to the court's internal Cafeteria Committee, where dessert toppings and silverware choices will compete for his time with constitutional issues big and small -- all part of the dizzying first few weeks for the justice.

Justice Elena Kagan, who had been the court "newbie" since 2010, unwittingly gave her future colleague some personal advice on managing the job. She appeared last September at a Colorado legal conference with Gorsuch and spoke to what it was like to have the least seniority.

"I think this is a way to kind of humble people," she said about her stint as one of the office lunch monitors. "You think you're kind of hot stuff. You're an important person. You've just been confirmed to the United States Supreme Court. And now you are going to monthly cafeteria committee meetings where literally the agenda is what happened to the good recipe for the chocolate chip cookies."

And the rookie hears about it when the food doesn't rate. One tradition of the court is the justices eat together privately after oral arguments.

"Somebody will say, 'Who's our representative to the cafeteria committee again?'" she told Gorsuch. "Like they don't know, right? And then they'll say, 'This soup is very salty.' And I'm like supposed to go fix it myself?"

Kagan recalled her proudest moment was getting a frozen yogurt machine installed in the dining area, which is open to the public.

She had been on the internal committee for seven years, with Justice Stephen Breyer in the job 11 years before that.

"It's a way of bringing them back down to Earth after the excitement of confirmation and appointment," Roberts said in 2011. Roberts' role as "first among equals," though, meant he never had to endure any of the "new guy" responsibilities.

Another duty for the "junior" justice is to answer the door when the members meet privately for their weekly closed-door conferences -- voting on cases and deciding which petitions get added to the docket. His first such conference will be this Thursday.

Gorsuch will also take notes at the conferences, and will vote last when cases get decided.

It is a learning curve that many on the court admit can be baffling and often overwhelming.

Justice Samuel Alito said he frequently got lost in the marbled halls of the court when he joined in 2006, especially since the building was undergoing a massive internal renovation at the time.

Breyer said it took him years to feel fully comfortable in the job.

And Justice Clarence Thomas recalled what Justice Byron White told him when he donned the robes in 1991. White, whose clerks included Gorsuch, said, "Well, Clarence, in your first five years you wonder how you got here. After that you wonder how your colleagues got here."