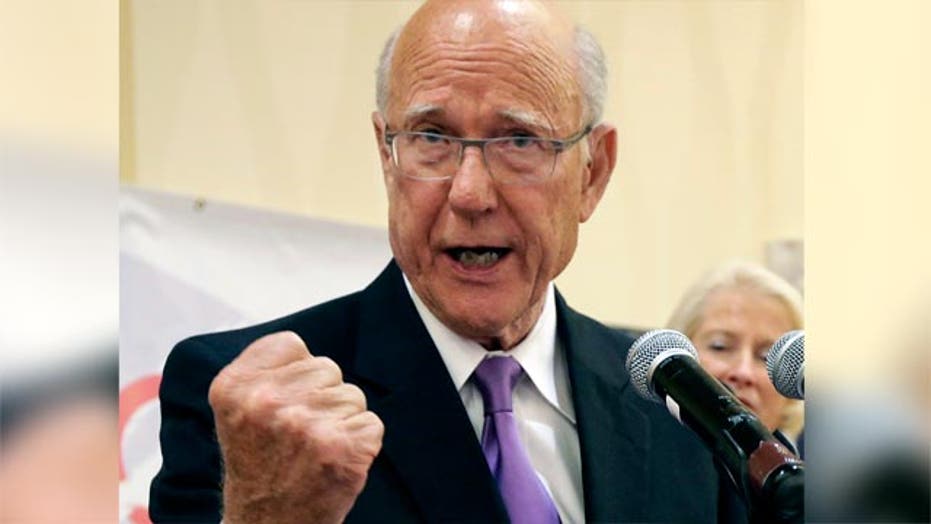 GOP in sudden fight to save Roberts' Senate seat

Kansas Republican Sen. Pat Roberts has served 17 years in the Senate without facing a serious challenge. But the 78-year-old lawmaker has been unexpectedly thrust into the most contentious fight of his political career, after a late-breaking shakeup last week elevated the race's independent candidate.

Now, a fresh poll shows the longtime incumbent in a dead heat, virtually overnight, and the campaign is bringing in some heavy hitters to prevent a midterm upset. If he and his allies are unable to blunt his rival's momentum, it could spell trouble for the GOP's hopes of trying to retake the Senate in November.

“Roberts being pretty much exposed as a weak candidate by both the primary election and by the [recent] polling results took everyone by surprise,” University of Kansas political science professor Burdett Loomis told FoxNews.com.

The Senate race in deep-red Kansas heated up after a series of bizarre twists and turns, trailed by accusations of dirty politics.

It started when the Democratic candidate in the race, Chad Taylor, abruptly announced on Sept. 4 that he was dropping out without explanation. That left Greg Orman, a businessman running as an independent, as the only viable candidate to face off against Roberts.

Speculation instantly swirled that with Taylor out of the picture, Orman could have a very real chance of unseating Roberts, and polls taken since the shakeup have backed that up.

A Survey USA poll conducted between Aug. 20 and Aug. 23 initially showed Roberts with a 5-point lead over the two other candidates. But a new poll -- taken after the Democrat sidelined himself -- by the same outfit shows Orman leading Roberts by 1 point, making it a statistical dead heat.

Political oddsmakers see the race the same way. The Rothenberg Political Report changed its analysis of the race from “Republican favored” to “toss-up/tilt Republican” in the wake of Taylor’s announcement.

Roberts’ campaign is hitting back hard, accusing Orman of being a liberal in disguise and national Democrats of working behind the scenes to get Taylor to quit to make way for Orman.

According to multiple reports, Taylor's decision to drop out of the race was indeed made after speaking with Democratic Missouri Sen. Claire McCaskill, who according to one, did so to try and unify support behind Orman. A McCaskill spokeswoman confirmed to FoxNews.com that the Democratic senator did speak with Chad Taylor, but declined to comment on what they discussed.

The Roberts campaign has since kicked into high gear. It hired veteran political consultant Chris LaCivita, who has frequently worked with and for the National Republican Senatorial Committee, and replaced Roberts’ longtime campaign manager Leroy Towns, according to the Associated Press.

LaCivita told FoxNews.com it is clear that a vote for Orman is a vote for Democratic values.

“Greg Orman is nothing more than a liberal masquerading as an independent,” he said. LaCivita said “there’s no doubt the race will be much more competitive” since Taylor dropped out, but expressed confidence that Roberts’ record will resonate with Kansas voters.

“Senator Roberts has been steadfast” in his convictions, LaCivita said. He said where Orman is concerned, “if you stand for nothing you will fall for everything.”

The Washington Post reported that LaCivita was brought onto the Roberts team by the NRSC. However, a spokesperson for the committee told FoxNews.com Roberts assembled his own campaign team, and the NRSC is simply working to support his team.

According to the Wichita Eagle, Roberts told a crowd at a Wichita event he plans to run an “aggressive campaign,” and that was evident at a Saturday debate between him and Orman at the Kansas State Fair.

Roberts hammered Orman for his past donations to Democratic politicians, saying Kansans “won’t be fooled” by “misleading campaign rhetoric.”

“My opponent wants you to believe he is an independent, he is not,” Roberts said. “He is a liberal Democrat. He has given thousands of dollars to Barack Obama, Hillary Clinton, and, listen to this, Harry Reid.”

However, Orman’s campaign insists he is completely bipartisan, and if one party is clearly in the majority in the Senate he will caucus with that party. In the debate, Orman said he has previously aligned himself with both parties, and wasn’t satisfied with either.

“I’ve tried both parties and like most Kansans, I’ve been disappointed,” Orman said in the debate. He later added, “My opponent would like you to believe I am a liberal masquerading [as] an independent … what I am is a fiscally responsible businessman who will work hard to go to Washington and not play party politics.”

Loomis said he believes at this point the race is a toss-up, and that Orman still needs to make clear what he stands for besides bipartisanship.

However, Loomis said he believes Orman is in many ways a “dangerous opponent” to Roberts. Loomis said Orman serves as a stark contrast to the senator, as he is young and would be fresh blood in the Senate.

“[Roberts] does symbolize in lots of ways, people really don’t like what’s going on in Washington,” he said. “For better or for worse, over the last 18 years of the Senate in particular, he’s been a part of that.”

And there’s one more twist. Taylor, the Democratic candidate, is engaged in an all-out-war with the Kansas secretary of state to officially quit the race. Kris Kobach, the secretary of state, said last week Taylor must remain on the ballot, and Taylor has since sued to try and get his name removed.