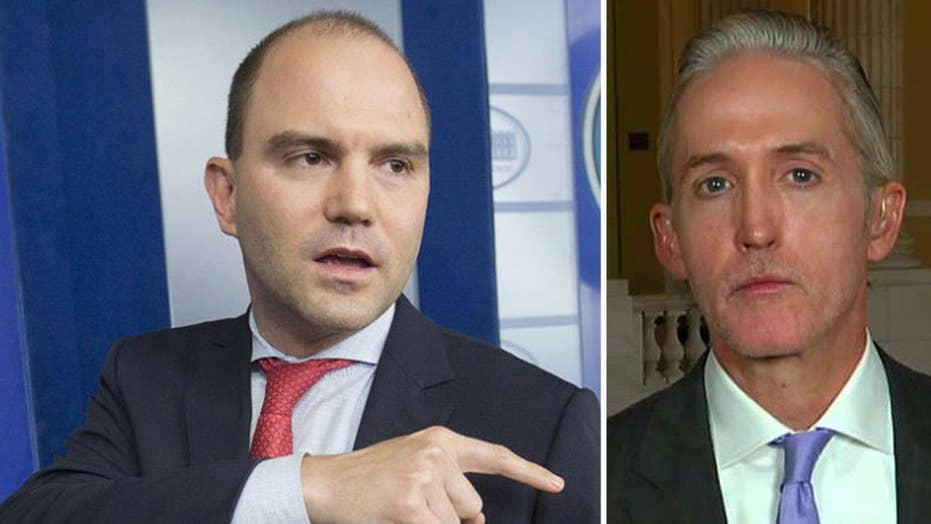 Republican condemnation of a top White House aide who boasted about the administration’s success selling the Iran deal to the public reached new levels on Tuesday, as several senators urged President Obama to fire him and a House committee looking into his claims went forward with its hearing – even though he didn’t show up to testify.

The House Oversight Committee hearing was called to examine White House “narratives” on the Iran deal, after top adviser Ben Rhodes was featured in a New York Times Magazine profile claiming they built an “echo chamber” to sell the plan. Chairman Jason Chaffetz, R-Utah, had called Rhodes to testify, but the White House shielded him from the appearance.

Chaffetz, at the top of the hearing Tuesday, said “there’s still a shroud of secrecy” surrounding the Iran deal and he wanted to hear from Rhodes to seek “clarity.”

“I do not doubt his talents and his knowledge,” Chaffetz said. “But the deal that had been spun up and sold to the American public, I’m not sure it was as clear as it should have been.”

He said Rhodes, in the profile, showed “disdain” for the media and foreign policy circles.

Just hours earlier, the White House officially informed Chaffetz it would not make Rhodes available to testify, citing an executive privilege-related claim. Chaffetz did not go forward with plans to keep a seat open Tuesday for Rhodes, and instead called foreign policy analysts and scholars to testify on the deal. One of them, the American Enterprise Institute’s Michael Rubin, accused Rhodes of creating a “propaganda operation.”

The committee’s top Democrat, Rep. Elijah Cummings, D-Md., slammed Republicans for the hearing, criticizing the analysts they called while noting they didn’t invite military generals who support the agreement. He said Republicans rushed to hold the hearing “without even one week’s notice.”

Rep. Trey Gowdy, R-S.C., said at least Cummings would be able to question the witnesses present. Rhodes, he said, “didn’t bother to show up.”

Meanwhile, several GOP senators have written to Obama urging him to “dismiss” Rhodes “before he further tarnishes the Office of President.”

They wrote: “While members of the Executive and Legislative branches may sometimes deeply disagree on issues of vital importance to our nation’s security and prosperity, we should all agree, for the greater good of our Republic and the citizens whom we represent, to engage in our debates in a respectful, honest, and constructive manner. Mr. Rhodes’s disrespectful, deceptive, and destructive conduct has fallen appallingly short of this standard, however. Indeed, if he had conducted himself this way in a typical place of business outside Washington, where American taxpayers work, he surely would have been already fired or asked to resign.”

Sources tell Fox News that the House committee was keen for Rhodes to appear voluntarily Tuesday so they avoid the territory of a possible subpoena.

The magazine article that touched off the controversy outlined how Rhodes created a narrative of the deal coming out of the 2013 election of “moderate” Iranian President Hassan Rouhani and Iran’s subsequent “openness” and willingness to negotiate.

In fact, the story stated, the majority of the deal was hammered out in 2012, well before Rouhani’s election. However, the Rhodes narrative was politically useful to the administration as it presented them as reaching out to the moderates who wanted peace.