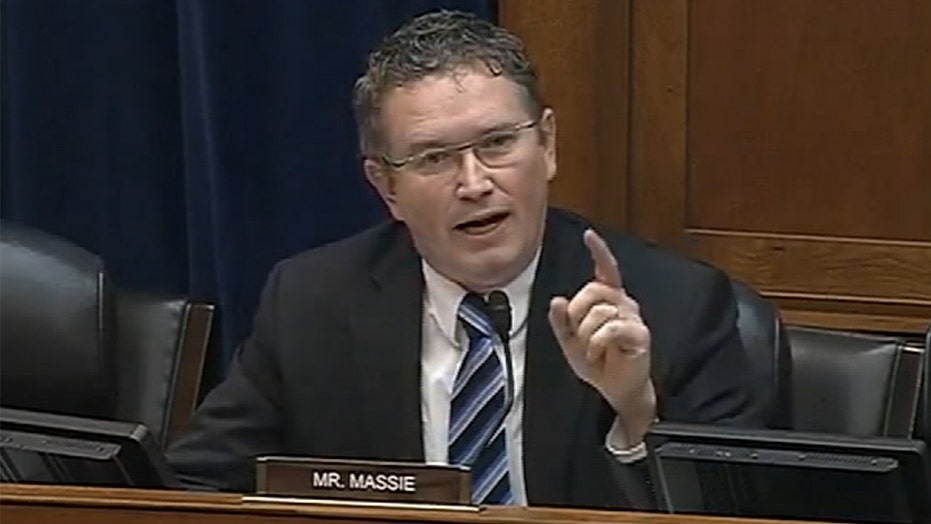 Raw video: Kentucky Republican Representative Thomas Massie and witness get into heated exchange at House Oversight Committee hearing on 'Voter Suppression in Minority Communities: Learning from the Past to Protect Our Future.'

A House Oversight Committee hearing on voter suppression in minority communities erupted into a shouting match Wednesday when Rep. Thomas Massie, R-Ky., tried to draw parallels between laws that restrict people's ability to vote -- like ID requirements and restrictions on ex-felons -- and gun control measures.

Toward the end of Massie's time, witness Timothy Jenkins, who serves on the board of social justice organization Teaching for Change, criticized Massie for steering the hearing in what he believed was the wrong direction. To underscore his point, Jenkins claimed that "nobody has died" because they were deprived of the right to carry a gun. Massie was quick to tell him otherwise.

"Mr. Jenkins, that’s absolutely false. I can give you multiple examples," Massie replied, only for Jenkins to insist, "No, it's not false!" This prompted Massie to raise his voice while recalling a tragedy involving a former staff member.

"I had a staffer who worked for me whose husband was shot in front of her in a gun-free zone!" Massie said. Committee Chairwoman Carolyn Maloney, D-N.Y., then told Massie that his time had expired, but after Massie requested permission, she allowed him to continue.

“What you’re saying, Mr. Jenkins, is absolutely incorrect," Massie said. "I had a staffer ... who worked for me. She watched her husband be gunned down in front of her in a gun-free zone, because her firearm -- she followed the law and left her firearm in the vehicle. So do not tell me, and do not tell her that nobody has ever died because they were deprived of their right to keep and bear arms."

Jenkins was unfazed by Massie's story, and he proceeded to chide him and accuse him of changing the subject of the hearing.

“Let me tell you this: that the whole business of being able to vote is not intermeshed with the business of bearing arms," Jenkins said. "You are taking the time that we’re trying to deal with a constitutional right to be a citizen and turning it into something else. Use another forum! We don’t have many opportunities to get a right to vote. We don’t have an opportunity to talk about the whole business of the way in which the Constitution has been distorted. And don’t take us off on some rabbit trail to talk about arms.”

Massie insisted that "the Constitution is not a rabbit trail," adding that "it looks somewhat disingenuous when you’re now trying to pick and choose which constitutional rights that somebody should have."

"I'm trying to pick and choose the subject matter of this hearing," Jenkins responded, as the back-and-forth continued. Massie said that the time belonged to him, and he was concerned about this issue. Jenkins then accused him of “filibustering,” before Massie yielded back to Chairwoman Maloney.