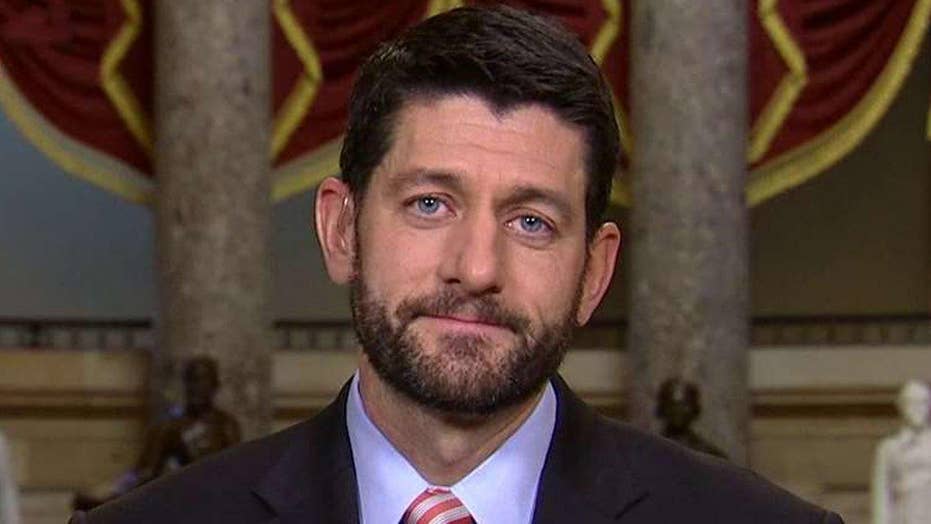 Within hours of reconvening Tuesday, the GOP-led Congress will finally act to fulfill a 2010 promise to repeal and replace ObamaCare.

The effort is set to begin Tuesday afternoon when the House Rules Committee meets on the repeal measure, with a full debate and vote as early as Tuesday. With the Republican-led Senate having already passed its version, GOP congressional leaders will send the measure to President Obama, daring him to veto it.

Obama will undoubtedly veto the measure to undo his signature health care law, and Congress has nowhere near the votes to override a presidential veto.

But Republicans hope the entire exercise might start to change the circumstance on Capitol Hill regarding the years-old argument about ObamaCare and its repeal.

House Speaker Paul Ryan, R-Wis., is promising to unveil a bill to, in fact, replace ObamaCare.

For all of the GOP’s Sturm und Drang about ObamaCare, neither the House nor the Senate has ever debated a bill that attempts to succeed the law.

The reason is that nobody has crafted a plan that would pass in either chamber.

In 2010, House Republicans concocted the “Pledge to America.” It was a political compact created to help the GOP seize control of the House from Democrats and tell voters what they would do if in control.

One of the promises was to “repeal and replace” ObamaCare. After Republicans earned the House majority, the first major vote of 2011 was to repeal the health care law. The House and Senate have voted more than 60 times to either fully or partially repeal the Affordable Care Act, as it is more formally know. Yet they’ve never held a vote to replace ObamaCare.

But with Ryan now at the helm in the House and the GOP controlling the Senate, this may be one of the few chances the party has to come together around a bill which would replace the six-year-old law.

Ryan is, nevertheless, tempering expectations. In a recent meeting with reporters, he indicated that the House was practically obligated to pass a replacement bill. And though Ryan was confident about the House doing so this year, he underscored the unlikelihood that Obama would sign the legislation into law.

Still, the effort is part of Ryan’s attempt to contrast Republicans with the agenda of Obama and the left. Democrats have long hectored Republicans for failing to cough up a bill to succeed ObamaCare.

Such a measure is a unicorn.

If there were the votes to approve that elusive bill, Republicans would have done it. But if they finally at least draft a bill and better yet pass it, then the sides can argue about policy and not just exchange hypothetical catcalls.

Still, if Ryan is correct, the House GOP will write an ObamaCare alternative seven years after a triumvirate of House committees prepped the initial iterations of the ACA in the summer of 2009.

The House approved the first version of ObamaCare in November 2009. The Senate did so on Christmas Eve of 2009. Both bodies ushered the final health care packages to passage in March, 2010.

This enterprise won’t be easy for Republicans.

Some GOP aides defended not having a replacement bill at the ready.

They suggested the promise in the Pledge to America was to “repeal and replace” the ACA. Certainly there were votes to repeal the law (at least in the House). But the law was never repealed. Therefore, they argued, it wasn’t yet incumbent upon Republicans to make good on the second contingency and replace the statute.

Ryan won’t be able to implement the replacement package either with Obama still in the White House in 2016 -- if it does, in fact, get that far. But if Ryan’s successful, he’ll have come a lot further than anyone else has before.

Which brings us back to what the House is up to next week.

Though the House has approved dozens of repeal bills over the years, the Senate has not until a few weeks ago taken a direct, up-or-down vote on eliminating ObamaCare.

Democrats controlled the Senate until January 2015. That meant they could block any Republican effort to deposit a repeal bill on the floor.

However, the story changed when the GOP won the majority. Still, Senate rules often favor the minority party. Republicans would have to vault two anticipated Democratic-filibusters just to bring up a repeal bill for debate. Overcoming those filibusters would require two roll call votes of 60 yeas. That wasn’t happening.

The GOP nevertheless had one option at its disposal -- something called “budget reconciliation.”

Budget reconciliation is a unique, once-a-shot piece of legislation that operates under special rules. It’s inoculated from pesky Senate filibusters. And if you can jam something into a budget reconciliation measure, you can usually get it through the Senate because it just requires a simple majority for passage.

The House recently started this process and knocked out a dual reconciliation bill that simultaneously repealed ObamaCare and defunded Planned Parenthood. It then shipped the measure to the Senate. But because of special Senate rules governing budget reconciliation, the upper chamber had to tweak the plan to pass it. That meant that the House and Senate had approved slightly different bills. So the Senate then bounced its updated version back to the House.

This is where things stand: The House is expected to debate and vote on the final, Senate-amended version of the reconciliation plan. If approved, the House and Senate are in alignment and the bill goes to Obama to sign or veto -- though this is a fait accompli.

House Republicans initially planned to take up the reworked Senate bill right before Christmas. But at the last minute, they decided to delay that gambit. They had a new tactic. Wait until after the holiday to maximize exposure of the House debate and vote -- as well as the President’s planned veto. Plus, it might help tee up Republican plans on health care in the new year.

The GOP hopes it can artfully message its plans to design and approve a replacement bill for ObamaCare -- with something with a lot more policy teeth than the other parliamentary gymnastics of just voting to repeal parts or all of the legislation over and over again.

Republicans also are hoping the public embraces these policy ideas as a contrast to those propounded by Obama and Democrats with health care topping the list.