House Republicans fire back at Pelosi's criticism of Commitment to America

The Commitment to America, which House Republicans launched Friday, outlines their plan to address issues like parental rights and the economy if they retake the House in November's midterm elections. 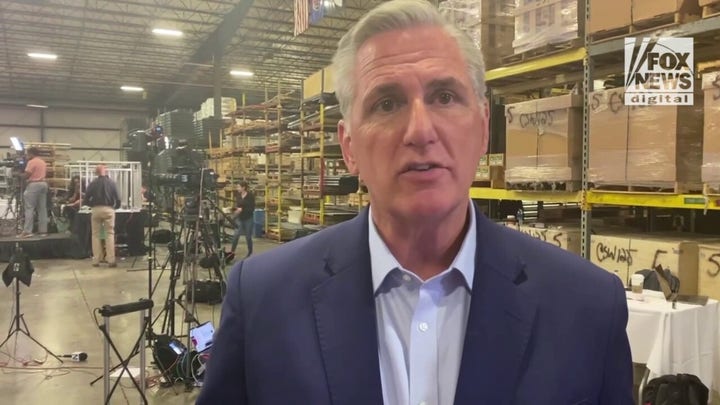 Pelosi was quick to attack the Republican plan.

McCarthy, R-Calif., pushed back on Pelosi’s attack on the package in an interview with Fox News Digital, saying their plan will "actually put America on a new course."

"I think why she does that is she can’t run on the policies and the damage they’ve caused to America," the GOP leader continued. "And they have no plan to fix it."

House Minority Whip Steve Scalise, R-La., told Fox News Digital that Pelosi "shows the country every day how out of touch she is with America."

"People are angry about all of the spending, the inflation, the out-of-control policies that have come from this big, far-left socialism agenda that Nancy Pelosi and Joe Biden have pushed," Scalise continued. "The Commitment to America is a bold, conservative answer to what’s broken in Washington."

"We’re gonna actually focus on fixing the problems that Nancy Pelosi and Joe Biden created, and I think you’re going to see tremendous excitement all around the country, not just from Republicans, but from Democrats and independents, too, who are tired of that far-left, extremist socialist agenda," Scalise added.

"We are proud to lead the way," Stefanik said. "House Republicans are on a mission to save this country. We have a Commitment to America, and I can promise you we will fire Nancy Pelosi once and for all."

New York Rep. Elise Stefanik told Fox News Digital that Republicans will retake the House in November and "fire Nancy Pelosi once and for all." (Kevin Dietsch/Getty Images)

The agenda includes a slate of general policy recommendations in four broad categories: "An Economy That's Strong"; "A Nation That's Safe"; "A Future That's Built on Freedom"; and "A Government That's Accountable."

The GOP leaders say the agenda was formed with input from Republicans across the country, with the express purpose of avoiding "top-down" party politics.