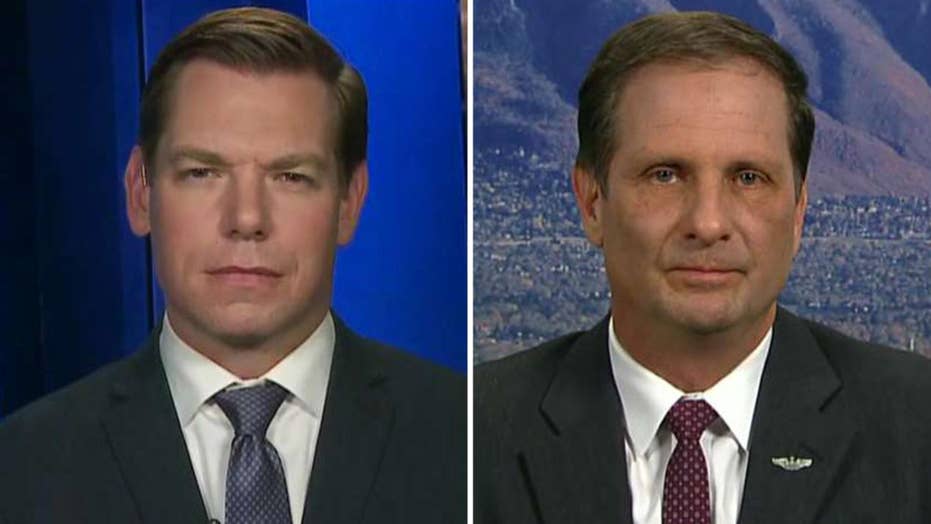 Two key members of the House Intelligence Committee that released the memo alleging surveillance abuse in the investigation of the Trump campaign join the debate on 'Fox News Sunday.'

The dossier used to secure a federal warrant to surveil the Trump presidential campaign read like a "two dollar novel," a Republican lawmaker told "Fox News Sunday," as the partisan clash over the so-called "FISA memo" continued to dominate the battle inside the beltway.

Rep. Chris Stewart, R-Utah, made the colorful claim just two days after Republican leaders of the House Permanent Select Committee on Intelligence released the now-declassified memo regarding the early stages of the FBI’s investigation into alleged collusion between the Trump campaign and Russia.

The memo alleges the Obama Justice Department and FBI abused their authority, in part by requesting a warrant from the Foreign Intelligence Surveillance Court for then-Trump campaign adviser Carter Page based on a minimally-vetted, opposition-research dossier that was financed by Democrats.

The memo charges the dossier was compiled by ex-British spy Christopher Steele and financed by the Democratic National Committee and the campaign of Trump’s 2016 rival, Hillary Clinton. The memo asserts that ex-FBI official Andrew McCabe told the committee the warrant was dependent on the dossier, and it further states that the FBI did not divulge to the court critical information regarding its dubious provenance.

Democrats have countered that the memo is misleading and was made public to undermine Special Counsel Robert Mueller's investigation into possible collusion.

“It does appear that way,” said Rep. Eric Swalwell, D-Calif., who sits on the committee. “We believe that the memo the Republicans put out shows not a single abuse but a willingness to risk our republic to protect the president.”

Trump has frequently expressed his frustration about the probe being a drag on his first year in office, and recently suggested it should end because no collusion has been found.

“This memo totally vindicates ‘Trump’ in probe," Trump tweeted Saturday. "But the Russian Witch Hunt goes on and on. Their (sic) was no Collusion and there was no Obstruction (the word now used because, after one year of looking endlessly and finding NOTHING, collusion is dead). This is an American disgrace!”

Stewart said Sunday Mueller's probe should continue, but that the memo revealed damning flaws in the process that led to the probe.

“It doesn’t end that need at all," he said. "It’s an absolute abuse of power, and we just want people to know that. The memo has nothing to do at all with the special counsel. I hope the special counsel completes his work and reports it to the people.”

Swalwell also called on Stewart to protect Deputy Attorney General Rod Rosenstein, who oversees the Mueller probe and purportedly approved one of the requests for an extension of the FISA warrant, which has sparked speculation that Trump wants him fired.

The White House has denied it is considering firing Rosenstein, the No. 2 official at the Justice Department. But Trump, asked recently if he had confidence in Rosenstein in light of the memo's revelations, made his frustration clear.

"You figure that one out," Trump told reporters.