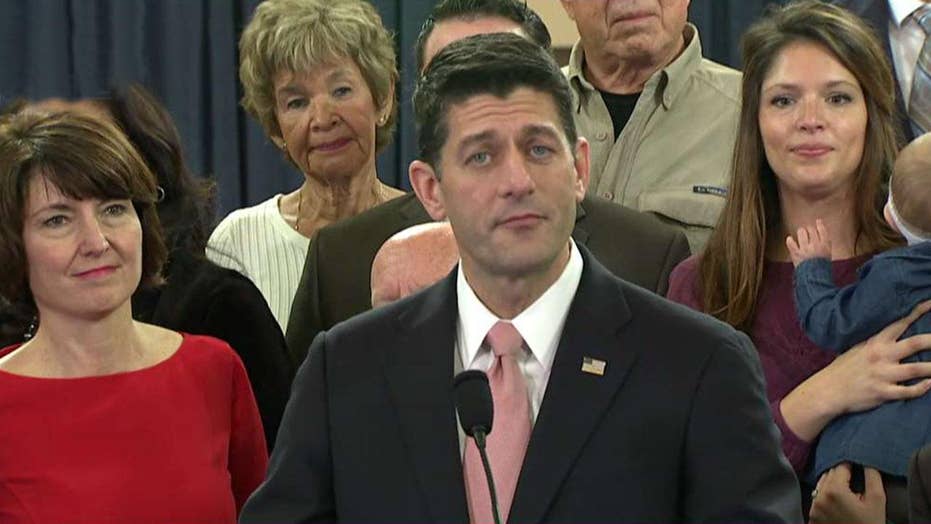 Paul Ryan: This plan is for squeezed middle class

It took five months the last time Congress passed legislation of this magnitude.

Tax reform is up now. The last legislative behemoth was the Affordable Care Act, better known as ObamaCare.

It was an exhaustive legislative lift for Democrats. And it drained the party.

Months later, Democrats proceeded to cough up a net of 63 House seats in the 2010 congressional race  -- allowing Republicans to reclaimed control of the chamber. The midterm represented a harsh referendum on President Obama.

Now Republicans want to lug a major tax bill through the House by Thanksgiving, jam it through the Senate shortly after that, fuse the House and Senate packages into one and deposit the legislation on President Trump’s desk by Christmas Day.

This colossal task comes all while the Trump administration and Congress tries to avoid a government shutdown in a little more than a month.

The president and House Speaker Paul Ryan, R-Wis., may want tax reform done before December 25. But the real deadline could be much sooner.

To wit: If lawmakers are tussling over government spending in December, tax reform isn’t getting done. At least in December. Government funding fights are one of the most virulent contagions in the legislative experience. They are vacuums, siphoning away valuable political capital, and, perhaps in this instance, the most crucial commodity of all: time.

There was speculation that GOP lawmakers would latch the DACA repair plan to a catch-all “must pass” bill at the end of the year. Despite holding majorities in both bodies of Congress, Republicans have historically required major swaths of Democratic votes to avoid government shutdowns.

However, Democrats could withhold their votes if there’s no fix on the horizon for DACA, or Deferred Action for Childhood Arrivals, the Obama-era program that protects young illegal immigrants from deportation.

Such a maneuver would force Republicans to haul the freight on their own. That scenario alone could prompt a government shutdown at a Homeric time for the GOP, as leaders try to complete tax reform.

House Republicans have almost no margin for error to adopt tax reform.

Parliamentary math always dominates. In other words, do Republicans have the votes?

A tweak to the bill here or a change there could drastically alter the vote calculus. The House is now comprised of 433 members: 239 Republicans and 194 Democrats, with two vacancies. The 45-seat margin means Republicans can lose only 22 from their side of the aisle and approve the tax bill.

So far, Democrats haven’t shown interest in the tax-reform package. The Blue Dog Coalition (comprised of moderate to conservative Democrats) announced its opposition.

“The Blue Dogs called for a real seat at the negotiating table on a tax bill -- one where our members would be able to see the bill ahead of time,” said Blue Dog leaders, Democratic Reps. Henry Cuellar, Texas, Jim Costa, Calif., and Dan Lipinski, Ill.

That said, Fox News has spoken with a couple of Democrats who suggested they could vote for the tax bill. They say the initial Republican draft is better than they thought. Still, they’d like to see the final product.

Regardless, it’s doubtful that Republicans could court more than a handful of Democrats under the best of circumstances. So Republicans will likely have to advance the legislation on their own.

Think everyone is on board?

“I think it sucks,” was the frank evaluation of one House Republican when asked about the bill.

What is past is prologue.

In October, the House approved a budget framework for tax reform, 216-212. Change two votes and there’s a tie. By rule, ties lose in the House. So this vote is already on the edge.

Consider the GOP members who voted no on the budget blueprint:

Conservatives like Gaetz opposed the budget plan because it failed to address spending. But some who voted nay could vote yea on tax reform.

The measure is particularly challenging for Republicans from high tax states like New York and New Jersey.

New York GOP Reps. Tom Reed and Chris Collins are all in. House Appropriations Committee Chairman Rodney Frelinghuysen, R-N.J., appears to be leaning yes at this stage. Here are some canaries in the coal mine to watch. Tax reform will pass if Stefanik, Katko and Tenney vote yes. But watch if Frelinghuysen is a nay.

California is another barometer.

Few tax write-offs in California could be a problem for those lawmakers. The bill is in real trouble if California GOPers begin to drop.

A sense of desperation now permeates the House Republican Conference. GOPers stumbled badly on repealing and replacing ObamaCare. That underscores why Republicans view tax reform as compulsory. Otherwise, the Republican leadership predicts the party could lose control of the House.

“If Republicans can’t get this done, do you deserve control of the House?” asked NBC’s Kasie Hunt of Ryan last week.

But Ryan is insistent.

“We’re going to get this done,” he said. “The political will is strong.”

But there are divergent theories about the political consequences of passing or failing tax reform. Certainly Republican leaders will use the “pass it or else” cudgel to frighten uneasy members and score a few votes.

Then again, Republicans from swing districts who “take one for the team” could find themselves on the ropes. Could a vote like that alone put the House in play? Unclear.

Recent history hasn’t been kind to House members from the same party of a new president when facing re-election in the first midterm.

Consider Democrats losing control of the House in 1994 after they approved a controversial crime bill that then-President Bill Clinton, a fellow Democrat, signed into law. The same was certainly the case in 2010 for Democrats after Congress approved ObamaCare on then-President Barack Obama’s watch.

Here’s a maxim though: Parties don’t build these large majorities to sit on them. They develop them to adopt major legislation. Burning some of the seats is collateral damage. Republicans appear to have failed on health care.

There’s a long way to go on tax reform. But even if Republicans do lose the House, they may get tax reform. That’s why many GOPers came to Washington anyway.

Democrats no longer control the House and the Senate. Democrats incinerated a lot of their own seats to heave it to passage. But guess what? ObamaCare lives.