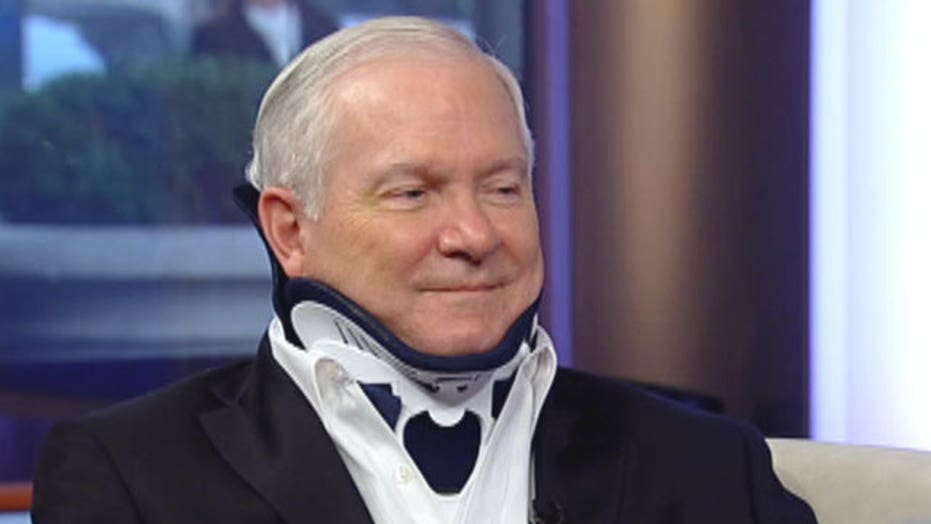 Former Defense Secretary Robert Gates says during the first few months of meetings in the Situation Room, things got awkward when President Obama and his advisers heavily criticized the decisions made by the previous administration – decisions Gates had a hand in making.

Gates told Fox News Wednesday that he and Adm. Michael Mullen would often return from the meetings and ask each other, ‘So what are we, chopped liver?”

“Do they not know the team they were just trashing … that we were integral members of that team at a very senior level?” Gates said, chuckling.

Gates, who had spoken Tuesday night with Fox News’ Sean Hannity, did say there were qualities in Obama he admired. He called the president’s decision to order a 2010 troop surge in Afghanistan “courageous,” saying the president did so against the advice of all of his advisers because Obama believed it would work.

In an interview with Fox News’ Sean Hannity Tuesday night, the former Pentagon boss spoke at length about his time serving under Obama and President George W. Bush, on the same day his controversial memoir “Duty” hit stores.

Gates said on “Hannity” he felt there was a difference between how Obama and Bush viewed meeting with senior military leaders. Bush, he said, seemed to genuinely enjoy meeting with them, but Obama did not seem to feel the same.

“He always gave the military leaders as much time as they wanted, listened carefully, was never nasty to them,” Gates said. “But I always had the feeling with him that, first of all, he was suspicious of their motives and, second, that time spent with them was an obligation rather than something he enjoyed…”

On Wednesday, Gates also discussed the politics and management style of the administration. He told Fox News he'd "obviously like to see less micromanagement from the White House" in the future. "Obama was aware of the politics but not driven by them," he added.

Referring to previously publicized criticisms of Vice President Biden, he said Biden is a "standup guy, but he's been wrong on most [foreign policy issues]." He also called White House adviser Valerie Jarrett the "power behind the throne."

As for the tension with the military, Gates said Tuesday he felt the root of the problem seemed to be Obama felt that military leaders such as Mullen, Gen. David Petraeus and Gen. Stanley McChrystal were pressuring him in public to adopt their recommendations.

“I believe that was not an orchestrated effort to pressure the president,” he said.

However, Gates said he admired Obama’s “courageous” decision to go forward with the troop surge in 2010 against the advice of all of his advisers. He responded to a widely reported excerpt of his book, in which he said Obama expressed doubts about the strategy in Afghanistan and seemed convinced it would fail.

Gates told Hannity it is important to look at Obama’s view toward the Afghan strategy as more of an evolution. He says he believes Obama truly did believe the surge would work, but became concerned during 2010 when the civilian side of the operation in particular clearly was failing.

“Our military operations were taking longer and were tougher than anticipated, and so I think he had these reservations,” he said. “I will give him credit as late as December 2010, he was still going out to the public and announcing the results of the latest review and saying 'we’re moving ahead, we’re doing a good job, we’re accomplishing what we set out to do.' But I think behind the scenes he was continually worried.”

Gates said the reason he felt comfortable working for Obama was because he always stuck to and stood by the decisions he made.

“I think the key is to focus on the actions here and the fact that he sustained this effort despite his reservations,” Gates said, “and frankly that’s one of the reasons why I was comfortable continuing to work for him.”