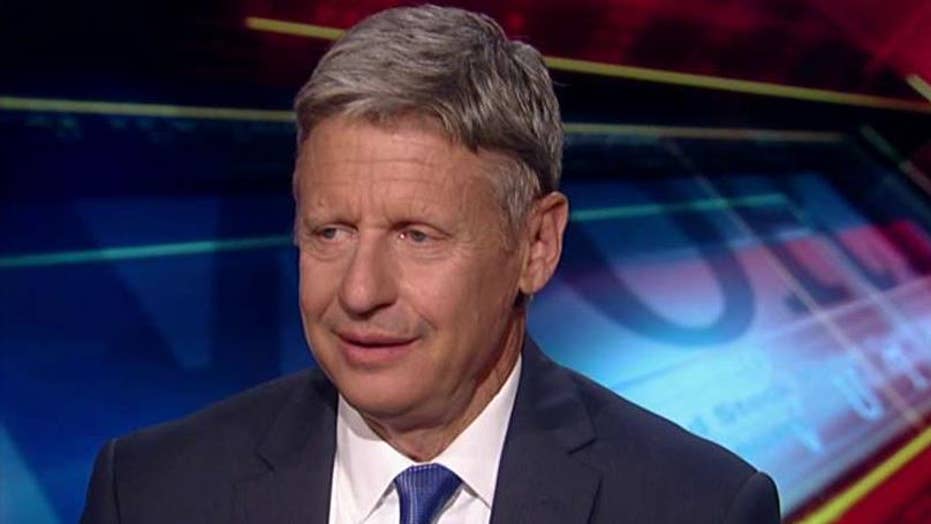 Libertarian nominee gets honest about his mistakes on 'Your World'

Libertarian presidential candidate Gary Johnson admitted he “blanked” Thursday morning on a fundamental question about the Syrian civil war – a stumble that comes as he tries to make his case for being included in the upcoming presidential debates.

Asked on MSNBC’s “Morning Joe” what he would do about Aleppo -- the major Syrian city that has been a stronghold for opposition forces and under siege by Bashar Assad’s government -- Johnson responded: “And what is Aleppo?”

Johnson said he was not, and Barnicle explained, “Aleppo is in Syria. … It’s the epicenter of the refugee crisis.”

Following his blunder, Johnson released a statement saying he thought he was being asked about an acronym, not the Syrian conflict.

“I blanked. It happens, and it will happen again during the course of this campaign,” he said. “Can I name every city in Syria? No. Should I have identified Aleppo? Yes. Do I understand its significance? Yes.”

He later said on Fox News' "Your World with Neil Cavuto" that he's "going to make mistakes going forward."

"I would make mistakes as president, but I'd be transparent," he told Cavuto.

The battle for Aleppo has become increasingly complex. According to Reuters, Iraqi Shiite militia members are preparing to join, while opposition forces battle Assad’s military for control. Assad’s regime was recently accused of another chlorine gas attack in a rebel-held area of Aleppo.

In an interview with Bloomberg Politics’ Mark Halperin, Johnson said he felt “horrible” after his TV flub.

“I have to get smarter, and that’s just part of the process,” he said.

“Well he is an isolationist, Hugh,” Ryan said. “Let’s give him the credit of the doubt on that.”

Johnson’s awkward response to the question underscores a potential gap in foreign policy knowledge that could hurt his presidential aspirations as the former New Mexico governor presses to be included in the upcoming presidential debates which start later this month.

To nab a spot on the national stage, Johnson needs at least 15 percent approval in five national polls. According to the Real Clear Politics polling average, Johnson is polling at 9 percent.

The news doesn’t get much better for Green Party presidential candidate Jill Stein.

Stein and her running mate, Ajamu Baraka, are facing charges of criminal trespass and criminal mischief. The pair were purportedly caught on camera spray-painting construction equipment during a protest of a Dakota Access Pipeline.

The Real Clear Politics polling shows Stein currently at the bottom of the polls – with 3 percent.