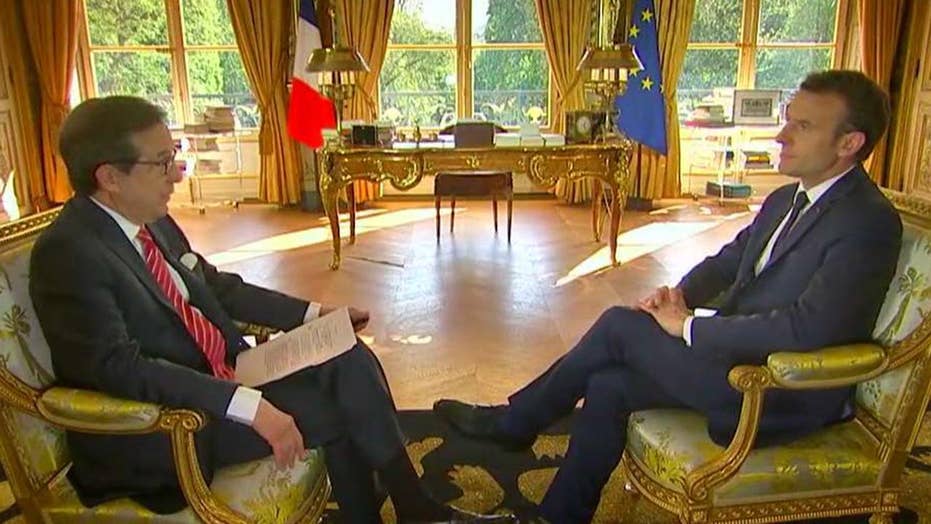 President Macron on relations with the US, Syria and Russia

On the eve of his three-day state visit to Washington, Emmanuel Macron sits down with 'Fox News Sunday' anchor Chris Wallace for an exclusive interview.

French President Emmanuel Macron insisted Sunday that he has a solid relationship with President Trump, ahead of his Washington visit this week, but also appeared to caution the president about his aggressive stances on Iran, climate change and international trade, in an exclusive “Fox News Sunday” interview.

Macron spoke ahead of his visit this week to the United States that includes a dinner Monday with wife Brigitte, Trump and first lady Melania Trump at Mount Vernon, the home of America's first president, George Washington, on the banks of the Potomac River in Virginia.

The trip will mark the first time that Trump has hosted an official state visit since taking office last year and will include a state dinner Tuesday night at the White House and Macron making a joint address to Congress on Wednesday.

The 40-year-old Macron said Sunday that he has a “very special relationship” with Trump, suggesting they’re political “mavericks” mutually committed to fighting terrorism and reducing the influence of rogue nations and dictators.

However, he suggested that Trump stay in the so-called Iran Nuclear Deal, in which economic sanctions are lifted on Iran in exchange for leaders winding down their nuclear program, ahead of a May 12 sanctions deadline.

“I’m not satisfied with the situation with Iran” but don’t leave the deal without a “better option,” said Macron, adding that the issue would be discussed this week. He also expressed optimism that Trump in the coming days will exempt European countries from the international tariffs he intends to impose on aluminum and steel.

“You don’t make trade war with your allies,” he repeated. “Let’s see what he will decide on May 1. I just say, where are your priorities?”

Trump last year said the U.S. will withdraw, for economic reasons, from the so-called 2015 Paris Agreement, in which world leaders agreed to reduce carbon emissions.

Macron, a former investment banker elected last year on a centrist, anti-establishment platform, also attempted to settle a controversy about whether he indeed persuaded Trump to keep U.S. forces in Syria -- after the two countries and the United Kingdom recently participated in a U.S.-led missile strike on chemical weapons facilities in Syria connected to regime of Syrian President Bashar Assad.

The French president suggested the U.S. at least maintain a diplomatic presence in Syria, considering a regime change would “fuel the new terrorists” and create a vacuum in which  the “Iranian regime” would thrive.

“It’s not automatically U.S. forces, but that’s U.S. diplomacy and that’s your presence,” Macron told “Fox News Sunday” host Chris Wallace. “We will have to build a new Syria after war. And that’s why I think the U.S. role is very important to play.”

Macron also said he’ll ask Congress for its support in efforts to stamp out terrorism and reign in rouge nations.

He described the U.S. as “one of the last resorts” for peace and multilateralism. And he thinks special counsel Robert Mueller’s investigation into whether the 2016 Trump presidential campaign colluded with Russia to influence the outcome of the White House race has “no impact” on Trump’s credibility and his effectiveness on the world stage.

Macron also said “I’m not the one to judge” Trump over current controversies or investigations.

He said he and Trump “have a very special relationship because both of us are probably the maverick of the systems on both sides. I think President Trump’s election was unexpected in your country, and probably my election was unexpected in my country. And we are not part of the classical political system. … We are very much attached to the same values  …. especially liberty and peace,” he said.  “And I think the U.S. today has a very strong role to play for peace in different regions of the world and especially the Middle East.”