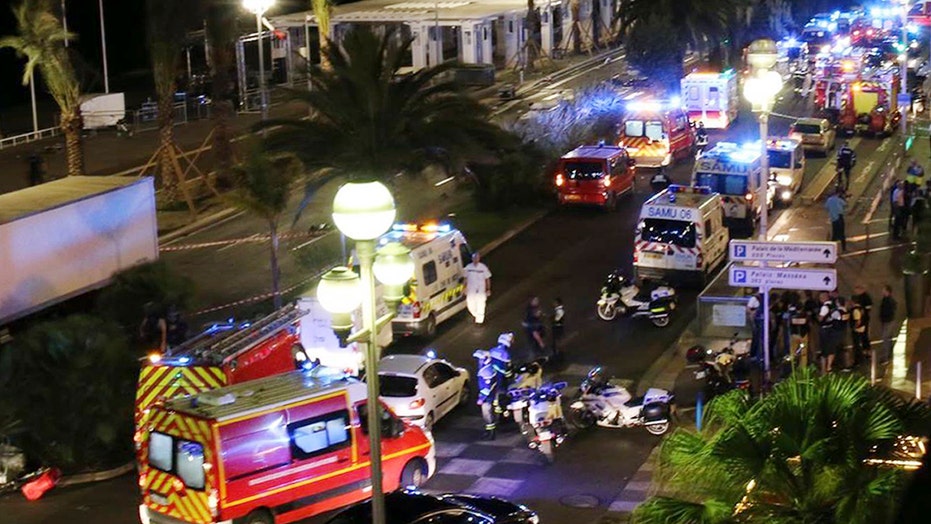 Officials say Nice attack is 'in line with ISIS'

The terror attack Thursday in Nice, France, that left at least 84 people dead has reignited the refugee debate in the 2016 presidential race, with Donald Trump blasting Hillary Clinton’s calls to let in thousands more and saying, “we’d better get awfully tough.”

The terrorist behind the attack, Mohamed Lahouaiej Bouhlel, was not a refugee but a French resident originally from Tunisia. The attack nevertheless has rekindled concerns that accepting more refugees from Islamic State-occupied Syria raises the risk for the U.S.

Clinton, though, back in September called for increasing that number to 65,000 – a 550 percent increase from the administration’s current target.

"I would like to see us move from what is a good start with 10,000 to 65,000 and begin immediately to put into place the mechanisms for vetting the people that we would take in," she told CBS News.

The campaign did not return a request for comment Friday from FoxNews.com on whether those plans might be revisited.

Trump, meanwhile, has called for a ban on immigration from countries with a proven history of terrorism, a shift from his previous call to temporarily ban all Muslims from entering the United States. He doubled down on that Thursday as reports were still coming in about the atrocity in Nice and said America had to get tougher.

“We have people that Hillary Clinton wants 550 percent more than Obama and Obama’s allowing a lot of people to come in. We have no idea who they are, they’re from Syria maybe, but they have no paperwork many times,” Trump told Fox News' Greta Van Susteren Thursday.

“We’re going to allow thousands, and ten and thousands, more people to come in and then you see a situation like Nice, France. It’s a horrible thing and we’d better get awfully tough,” he said.

“I’d be making it very, very hard to come into our country,” he said.

"No more political correctness, no more saying the migrant issue is just one of charity, we should let everyone in. It's time for common sense to win over,” Dr. Sebastian Gorka, chairman of military theory at Marine Corps University, told Fox News.

“The political elite has to change their behavior. They can’t continue to live in an Alice in Wonderland fantasy world where it’s about disenfranchised individuals, it’s not about jihad,” he said.

Ira Mehlman, a spokesman for the Federation for American Immigration Reform – a group that advocates for less immigration – told FoxNews.com the question was not about allowing refugees or not, but about whether the sheer volume of refugees can be properly vetted.

“It’s a huge danger. The numbers make it difficult to do the kinds of vetting that’s necessary and just the circumstances in Syria and other countries, it’s impossible to do the big checks necessary, all while we have ISIS and other groups telling us they intend to infiltrate operatives through the refugee process,” he said.

Clinton has stood by her call to keep the U.S. open to those fleeing wartorn countries, and has said she would focus on intelligence as a way to counter the jihad threat.

“One of my priorities is to launch an intelligence surge,” she told Fox News’ Bill O’Reilly Thursday. “We still do not have enough intelligence cooperation between our agencies, and those in other countries, including those in Europe.”

The Obama administration has countered Republican warnings, saying the U.S. has much stricter vetting procedures than Europe for accepting Syrian refugees, and the process takes up to two years to complete.

However, there is no in-built tracking process for refugees, who are free to move around the United States once admitted, making it difficult to monitor them.

President Obama has scolded Republicans for their stance on the issue, while urging compassion for the civilians trying to escape the war-torn region. At a naturalization ceremony in December, he said: “In the Syrian seeking refuge today, we should see the Jewish refugee of World War II.”

Some refugee advocacy groups have said the Obama administration’s current targets are very modest, and have backed Clinton’s call for more to be brought in.

“The Obama administration’s 10,000 goal remains an exceedingly modest one, when compared with the scale of the refugee crisis and the resources of the United States,” Anwen Hughes, deputy legal director of New York-based Human Rights First, told The Wall Street Journal.