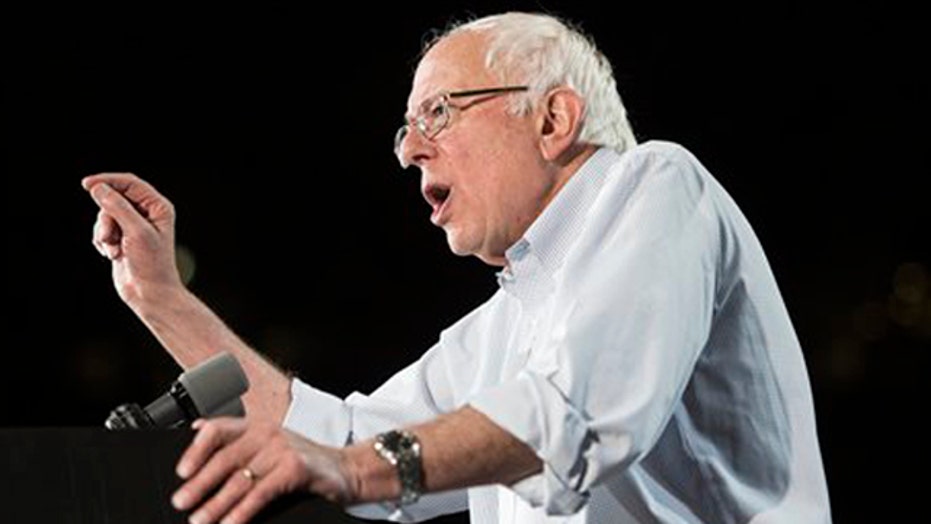 The explosive first Republican debate has shaken up the 2016 GOP presidential race.

The Democratic side’s getting more interesting too, as Vermont Sen. Bernie Sanders continues to make gains on former Secretary of State Hillary Clinton.

Those are just some of the highlights in the latest Fox News national poll of registered voters.  First, the nomination races:

Businessman Donald Trump still leads the field for the Republican nomination.  He gets 25 percent among GOP primary voters.  He was at 26 percent before the debate.  Trump’s support among women went from 24 percent two weeks ago to 21 percent now.  He mostly held steady among men (28 percent).

The real-estate mogul maintains his first-place status despite also being judged in the poll as having the worst debate performance and being considered the least likeable Republican candidate.  More on that later.

The August 6 Republican presidential debate was hosted by Fox News Channel in Cleveland.  Several of the exchanges at the debate remained in the news for days after.

Next in the GOP race is Carson, who garners 12 percent.  That’s up five percentage points since the debate and puts him in double-digits for the first time since mid-June.  Cruz captures 10 percent, up four points.

Bush has dropped to nine percent.  That’s down six points -- and puts him in single digits for the first time since April.  That’s likely a result of his debate performance, which was judged subpar by those who watched.  Bush does well on other measures -- he’s seen as both likeable and qualified.

Fiorina garners five percent support (+3 points), with Kasich (+1) and Rubio (-1) both at four percent.  New Jersey Gov. Chris Christie and Paul each get three percent.  The remaining candidates are at one percent or less.

On the Democratic side, Clinton drops below 50 percent for the first time, while Sanders keeps climbing.  She leads among Democratic primary voters by 19 points (49-30 percent).  Two weeks ago Clinton was up by 29 points (51-22 percent). A month ago she had a 40-point advantage (59-19 percent).

Vice President Joe Biden, who is undeclared, receives the backing of 10 percent.

The remaining Democratic candidates are at one percent or less.

Who “won” the Republican debate?  The poll asked voters who did the best in the debate and who did the worst.  Among debate watchers, the highest “net” of those two performance scores (best minus worst) is Fiorina (+12 points), followed by Carson (+8), Kasich (+8) and Rubio (+7).

The poll also asks about the qualifications of several contenders and finds more voters overall think Bush is qualified to be president than any of the others tested.  Sixty-seven percent say he is “very” or “somewhat” qualified, compared with 63 percent who say the same of Rubio and 62 percent who feel that way about Clinton.

When considering only the number saying the candidate is “very” qualified, the names stay the same, but the order changes: Clinton is at the top with 39 percent, compared to Bush at 27 percent and Rubio at 20 percent.

Overall, a 52 percent majority says Trump is not qualified to be commander-in-chief.  That includes four in ten who say he is “not at all” qualified (40 percent).

Among GOP primary voters, the top five Republican candidates based on their net likeability score (the net of those saying a candidate is the “most” likeable minus the percent saying the candidate is “least” likeable) are Carson (+19 points), Rubio (+13 points), Bush (+6 points), Huckabee (+6 points) and Fiorina (+5 points).

Bush (+2 points) and Rubio (+2 points) hold an edge over Clinton in hypothetical head-to-head matchups (both are within the margin of error).  Bush tied Clinton in June and was up by one-point in May.  This marks the first time Rubio has an advantage over the Democratic frontrunner.

Clinton tops Fiorina by 7 points, which is mostly unchanged from June.

Trump has narrowed the gap and trails Clinton by just 5 points, down from 17 two months ago.

None of the candidates receive 50 percent or better in any of the two-way match-ups tested.

GOP concern over Trump running as an independent is justified:  the poll finds Bush’s 2-point edge over Clinton in the two-way vote becomes an 11-point deficit when Trump is also on the ballot as an independent.  Same for Rubio: he goes from +2 to -12.  Fiorina goes from -7 to -18 points.

The Fox News poll is based on landline and cell phone interviews with 1,008 randomly chosen registered voters nationwide and was conducted under the joint direction of Anderson Robbins Research (D) and Shaw & Company Research (R) from August 11-13, 2015. The poll has a margin of sampling error of plus or minus three percentage points for all registered voters, and five points for both Democratic and Republican primary voters.