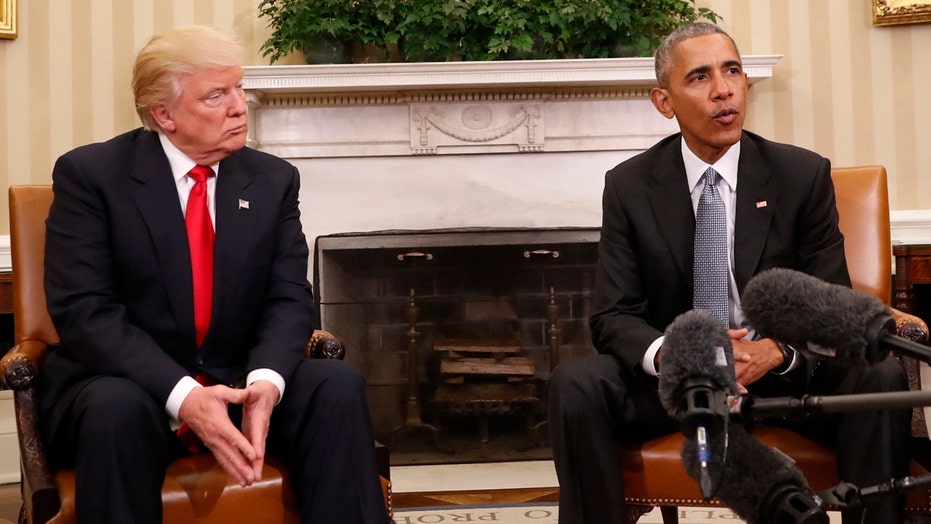 President-elect says he won't dismantle all of President Obama's policies

President Obama ends his presidency with positive ratings for his overall job performance as well as his handling of the economy, according to the latest Fox News Poll.

Yet while more people feel positively about the economy today than have in more than a decade, not many say their family’s financial situation has improved since Obama took office.

One-third says the economy is in excellent (3 percent) or good shape (30 percent).  That’s up 10 percentage points from 23 percent in January 2016 (2 percent excellent and 21 percent good).

Despite that improvement, only 30 percent feel they are better off financially now than before Obama became president.  One-in-five says they’re worse off (22 percent), and nearly half feel their family’s financial situation is about the same (47 percent).

A 56-percent majority thinks the economy will be in better shape a year from now.  One-third expects things to get worse (34 percent).

There’s a significant partisan gap in views on the economy’s future.  Republicans (89 percent) are three times more likely than Democrats (28 percent) to say the economy will be better next year.  Fifty-eight percent of independents see sunnier times ahead.

Obama leaves office with a thumbs-up from 53 percent of voters for his overall job performance, while 41 percent disapprove.

For his handling of the economy, 52 percent of voters approve and 44 percent disapprove.  That’s notable since Obama’s ratings on the economy were in negative territory for most of his presidency.

He received his record high of 55 percent approval in September 2009 -- the most recent time more voters than not rated him positively on the economy.  His record low was in August 2011 when 34 percent of voters approved.

Obama ends his second term with less than half of voters approving of the job he’s doing on foreign policy (47-46 percent), health care (47-51 percent), immigration (47-49 percent), and ISIS (41-51 percent).  In each of these areas, his ratings are at or near the high point of his second term.

Meanwhile, 43 percent feel the country is less safe than when Obama became president.  That’s more than twice as many as say it’s safer (20 percent).  One-third feels it hasn’t changed under Obama (35 percent).

Views of Obama as a person have been more positive than negative for much of his presidency.

Michelle Obama is more beloved:  67 percent favorable vs. 28 percent unfavorable.  Nearly half of voters, 48 percent, have a “strongly” positive opinion of the first lady.

By a nearly three-to-one margin, voters say Obama should not pardon Hillary Clinton for crimes she might have committed in connection with the Clinton Foundation or her time as secretary of state.  When Donald Trump mentioned Clinton’s email troubles at rallies, his supporters regularly chanted the phrase, “Lock her up!”  The poll shows 23 percent of voters think Obama should pre-empt any attempt to prosecute Clinton with a pardon.  Sixty-eight percent disagree.

Even voters who backed Clinton in the presidential election are more likely to oppose a pardon:  40 percent say Obama should vs. 48 percent shouldn’t.