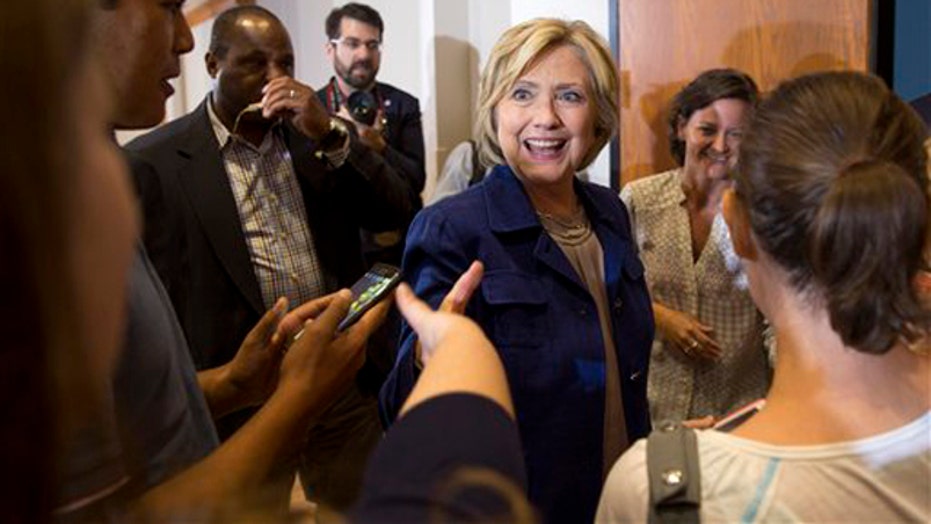 Why Hillary no longer has a lock on Democratic nomination

Most Republicans feel betrayed by their party -- and show their displeasure by supporting outsiders over establishment candidates in the GOP presidential race.

Real-estate mogul Donald Trump and retired neurosurgeon Ben Carson are the favorites in the Republican race in the latest Fox News national poll on the 2016 election.  Neither has held elected office before and yet the two of them -- together with businesswoman Carly Fiorina -- capture the support of more than half of GOP primary voters.

On the Democratic side, support for Vice President Joe Biden -- who is still considering a run -- has almost doubled since August.  But make no mistake: Hillary Clinton remains the frontrunner.

Trump stays on top with 26 percent among GOP primary voters, followed by Carson at 18 percent.  Fiorina and Florida Sen. Marco Rubio are next, tied at 9 percent.  All four have gained ground. After the August Fox News debate, Trump had 25 percent, while Carson had 12 percent, Fiorina 5 percent and Rubio 4 percent.

Trump holds his leader status even though he was once again rated in the poll as having done the worst job in the debate. Fiorina, Rubio and Carson receive positive marks for their performances.

The appeal of outsiders comes from significant dissatisfaction with the party establishment:  62 percent of Republican primary voters feel “betrayed” by politicians in their party, and another 66 percent say the recent Republican majorities in Washington have failed to do all they could to block or reverse President Obama’s agenda.  For comparison, 40 percent of Democratic primary voters feel betrayed by their party.

Frustration with party leaders has been a recurring theme for one sitting GOP senator in the race, Ted Cruz of Texas, who is next in the poll at eight percent.  He was at 10 percent in August.

Former Florida Gov. Jeb Bush garners seven percent, a new low for him in the Fox News poll.  He had 15 percent support as recently as early August.

The favorites among white evangelical Christians voting in the Republican primary are Trump (29 percent), Carson (21 percent) and Cruz (12 percent).

Straight talk is part of Trump’s outsider appeal -- but does he go too far?  Not for GOP primary voters: 65 percent of them say Trump just tells it like it is, compared to 30 percent who think he is “too mean and blunt” to be president.  Trump’s style may be a liability in the general election, though. Overall, 49 percent of voters find him too mean and blunt, while 44 percent say we need his directness.

Wisconsin Gov. Scott Walker and former Texas Gov. Rick Perry dropped out of the race in the last two weeks.  In announcing his decision, Walker made clear his desire to oust Trump. He called on other Republicans to also get out so “voters can focus on a limited number of candidates who can offer a positive, conservative alternative to the current front-runner.”

But what would happen if the “current front-runner” aka Trump were out?  The Fox poll asks voters their second choice candidate, which allows us to look at what happens to the race if someone were to get out. For instance, if Trump gets out, Carson takes the top spot (24 percent), followed by Rubio (12 percent), Fiorina (11 percent), Cruz (11 percent) and Bush (10 percent).

Clinton’s closest rival is still Vermont Sen. Bernie Sanders, who holds steady at 30 percent. Biden gets a record high 18 percent.  A month ago he was at 10 percent.

The remaining Democratic candidates are at two percent or less, including the newest entrant -- Harvard Professor Lawrence Lessig -- who made it official September 9.

Without Biden in the race, it’s Clinton 56 percent and Sanders 32 percent.

Clinton also maintains her advantage over GOP front-runner Trump in a potential 2016 matchup: 46-42 percent.   Last month, it was Clinton over Trump by 47-42 percent.

Who do voters think will be the next president? When asked to name who will win next November, without the aid of a list, a plurality says Clinton (28 percent) followed by Trump (20 percent).  But the electorate isn’t always great at predicting the outcome (at least not this far out).  Eight years ago, by almost four-to-one, voters said Clinton would be the next president (44 percent), followed by former New York City Mayor Rudy Giuliani (12 percent).  Barack Obama came in third at six percent (October 2007).  The new poll finds Sanders third at five percent, with Biden and the remaining GOP candidates splitting the rest of the respondents.

How many debates should there be?

Some of Clinton’s lesser-known competitors, as well as some high-profile Democrats like House Minority Leader Nancy Pelosi, think there should be more Democratic Presidential debates than the six currently scheduled.  Yet Democratic primary voters seem fine with that number: 58 percent say that’s “about right,” while another 25 percent think it’s “too many.” Just 14 percent say six is “too few.” Sanders supporters (20 percent) are more likely than Clinton supporters (13 percent) to want more debates.

Republicans plan to hold at least nine debates and 50 percent of GOP primary voters thinks that’s “about right.”  Another 41 percent say that’s “too many” and 7 percent say “too few.”

The poll also asks voters who did the best and who did the worst in the September GOP debates hosted by CNN in California.  Debate watchers give the highest net performance score (best job minus worst job) to Fiorina (+34 points), followed by Rubio (+7), Kasich (+2) and Carson (+1).  These are the only candidates to receive net positive scores for their debate performance -- and they are the same four who garnered the highest scores after the first GOP debate last month.

Fiorina received a score of +12 points in August, even though she was in the early debate for second-tier candidates.  She participated in the top tier debate this month and improved her net score by 22 points.

In this year of the outsider, the poll asks voters what would make them more worried about the state of American democracy:  a November match-up between another Clinton and another Bush or a race between upstarts Sanders and Trump?

By a 53-39 percent margin, voters say Sanders vs. Trump would be a worse sign for our democracy.

The Fox News poll is based on landline and cell phone interviews with 1,013 randomly chosen registered voters nationwide and was conducted under the joint direction of Anderson Robbins Research (D) and Shaw & Company Research (R) from September 20-22, 2015. The poll has a margin of sampling error of plus or minus three percentage points for all registered voters, and 5 points for Democratic and 4.5 points Republican primary voters.