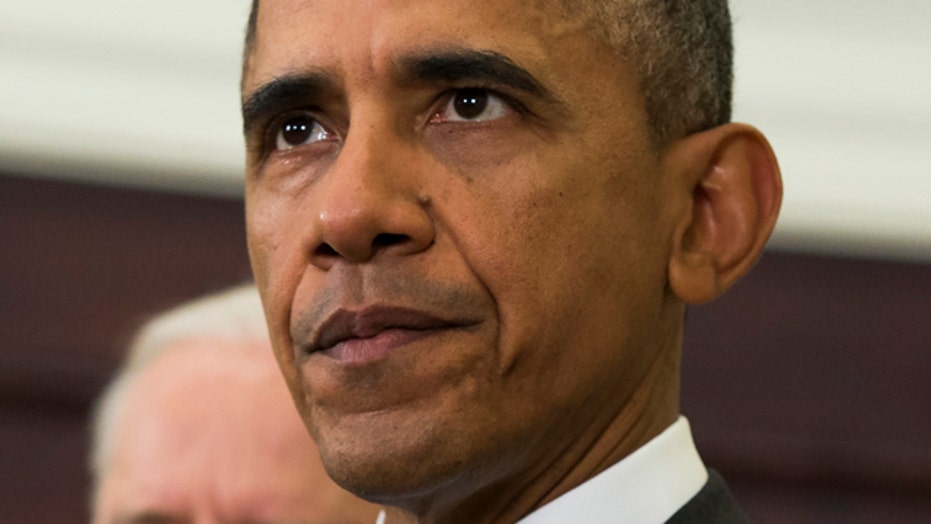 American voters think their government is doing a bad job reducing the threat from Islamic extremists -- and want President Obama to be tougher on them. A Fox News poll released Wednesday also finds voters doubt the White House has a clear strategy for dealing with ISIS, and a majority calls its emphasis on diplomacy a “halfhearted” attempt to deal with the problem.

It turns out that Sen. John McCain, R-Ariz., voiced the concerns of most Americans during last Wednesday’s confirmation hearing of Ashton Carter to be defense secretary when he said, “We still do not have a viable strategy to counter ISIL, and if you are not winning in war, you are losing.”

The poll shows that 73 percent of voters say the White House doesn’t have a clear strategy for defeating ISIS. That’s up from 64 percent who felt that way less than five months ago (September 28-30, 2014).

Now even 54 percent of Democrats don’t think Obama has a clear plan, up from 44 percent.

Obama sent his request to Congress for authority to use force against ISIS Wednesday.

By more than two-to-one voters rate the federal government negatively on reducing the threat from Islamic extremists: 31 percent say it’s doing an excellent or good job, while 67 percent rate it as only fair or poor.

Voters are seven times as likely to say the government is doing a “poor” job (28 percent) reducing the ISIS threat as to say “excellent” job (4 percent).

Obama’s rating on terrorism also remains negative, as 42 percent of voters approve of the job he’s doing, while 53 percent disapprove. Last month, it was 39-53 percent (January 2015).

Improved perceptions on the economy, however, have helped the president’s overall job performance rating -- and for the first time since August, less than half of voters disapprove. Obama’s rating stands at 45 percent approval vs. 49 percent disapproval. That’s up from 42-52 percent a month ago (January 11-13, 2015).

Voters view the administration’s current strategy that has so far emphasized diplomacy rather than decisive military force as “halfhearted,” and want the president to be tougher on Islamic extremists.

More than two-thirds -- 68 percent -- think Obama should be tougher on Islamic extremists. Only 26 percent say he is being tough enough.

And by a 61-32 percent margin, voters call the administration’s current prioritization of diplomacy over military force a “halfhearted” attempt to respond to Islamic extremists rather than a “serious” one.

Half of Democrats (50 percent) think Obama should be tougher on Islamic extremists and 41 percent describe the administration’s efforts in the Middle East as halfhearted.

Meanwhile, 23 percent of voters think airstrikes alone will defeat ISIS, but more than twice that many -- 60 percent -- think it will require a significant number of U.S. ground troops.

In addition, 69 percent favor the United States immediately giving Jordan the military supplies it needs to fight ISIS. That includes 65 percent of Democrats, 68 percent of independents and 75 percent of Republicans. The Islamic extremist group recently burned to death a captured Jordanian pilot.

How should the U.S. respond when an American is kidnapped by Islamic extremists? Most voters are against the idea of paying ransom (82 percent oppose) and trading the American for a terrorist who is in U.S. custody (76 percent oppose). On the other hand, there’s large support for attempting a rescue by U.S. Special Forces (89 percent favor).

Views are split over refusing to negotiate with the terrorists: 48 percent favor vs. 48 percent oppose.

In an interview Tuesday the president talked about the death of Kayla Mueller, an American aid worker who had been held by ISIS since August 2013. Obama said it is U.S. policy not to pay ransom. The Pentagon did swap five Taliban prisoners for Army Sgt. Bowe Bergdahl in May 2014.

Mueller was the fourth American hostage killed by ISIS.

Men (55 percent) are 14 percentage points more likely than women (41 percent) to refuse to negotiate. The other issue where there is a gender gap is on paying ransom, as women (20 percent) are twice as likely as men (10 percent) to favor that.

Majorities of Republicans (54 percent) and independents (52 percent) say don’t talk with terrorists, while a majority of Democrats would not rule out negotiation (55 percent).

Veterans and those currently serving in the military oppose both paying ransom (90 percent) and trading for a terrorist (77 percent). Almost all favor attempting a rescue (93 percent). Fifty-five percent of veterans would refuse to negotiate with Islamic extremists, while 42 percent would negotiate.