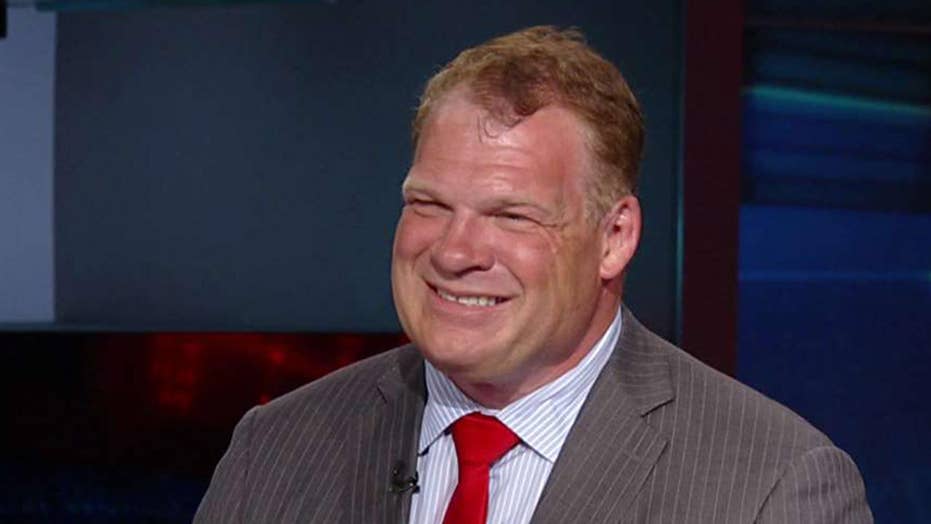 If there were championship belts for winning mayoral elections, professional wrestler Glenn Jacobs would be wearing one.

The WWE superstar, known as Kane, has won the race for mayor in Tennessee’s third-largest county. Jacobs handily defeated Democrat Linda Haney, with most of the votes counted in Knox County on Thursday, according to unofficial returns.

Haney, who ran small businesses with her husband before retiring, was considered an underdog in the deep-red county.

At his watch party, Jacobs, a Republican, claimed his victory while reminding his constituents that when he first announced his bid for mayor, he was greeted with "pretty resounding laughter" from some politicians, according to the Knoxville News Sentinel.

"But this professional wrestler got into a no-holds-barred, last-man-standing match, and when the bell rung, he was victorious," he told attendees at his watch party, according to the paper. "We were victorious."

“People are sick and tired of career politicians, and we have seen that at the highest level,” Jacobs told Fox News in May.

“People are sick and tired of career politicians, and we have seen that at the highest level.”

“I think a lot of people within the political realm, though, believe that President Trump was an anomaly and it only was going to happen at the federal level. And I don't think that's true,” he said. “I think it's going to happen through all levels of government, because whether you're on the left or you're on the right, we can see that government doesn't work for you. And people are looking for folks who will work for them.”

Jacobs, who also runs an insurance and real estate company, is not the only former World Wrestling Entertainment star to dabble in politics.

Jesse Ventura served as governor of Minnesota from 1999 to 2003. Former ECW competitor Terrance Gerin, known as Rhyno, ran for a Michigan state House seat in 2016 as a Republican, but lost in the general election by more than 8,000 votes, according to WXYZ-TV.

Former professional wrestler Daniel Rodimer ran as a Republican candidate for the Nevada state Senate, but lost to Valerie Weber in the primary, according to the Las Vegas Review-Journal.