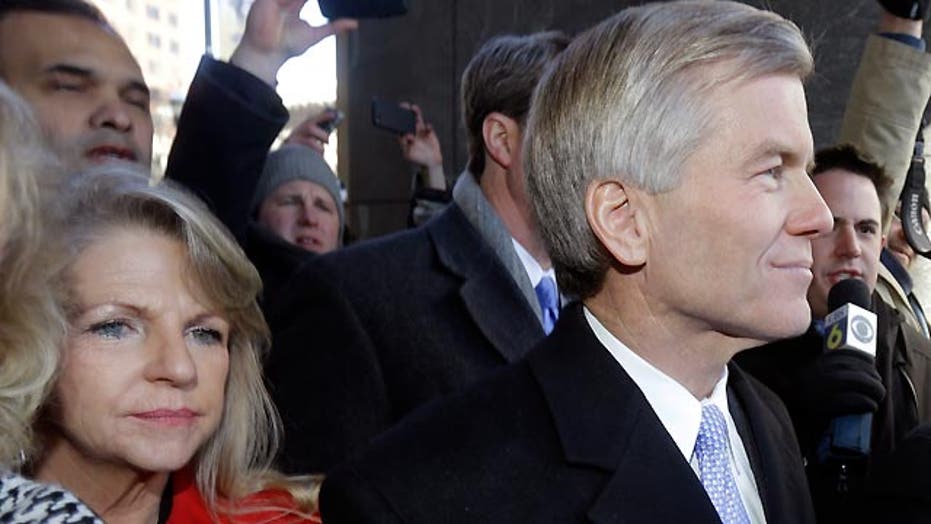 Former Virginia Gov. Bob McDonnell , who reportedly told federal authorities last year thanks but no thanks to a plea deal, pleaded not guilty Friday to federal corruption charges for allegedly accepting gifts, vacations and loans.

The McDonnells were indicted earlier in the week on a 14-count indictment that included charges of conspiracy, wire fraud and providing false statements in connection with the McDonnells' relationship to Jonnie R. Williams, Sr., chief executive of nutritional supplements maker Star Scientific Inc.

The couple arrived at the Richmond, Va., federal courthouse early Friday morning with an entourage of about two dozen family members and supporters.

The former governor has publicly denied all the allegations against him.

Earlier in the day, the couple was released on their own recognizance as they await trial. A federal magistrate judge ordered them not to leave the country.

Their jury trial has been set for July 28.

The Washington Post reported people familiar with case said the former governor rejected a plea deal that would have avoided charges for his wife. The paper said McDonnell would have had to plead guilty to a felony charge that “had nothing to do with corruption in office.”

According to the paper, “the behind-the-scenes plea discussions underscore the former governor’s strong assertion that prosecutors have stretched the law to ensnare a high-level official through the actions of his wife.”

Prosecutors told the judge Friday they would need two weeks to make their case against the one-time rising star of the Republican Party. The McDonnells’ legal team said it would need a week for their defense.

Following his indictment, McDonnell said he regretted accepting the "legal" gifts and loans from Williams. He also said he took "full responsibility" for his poor judgment.

Court documents show that Williams paid $15,000 for catering at the 2011 wedding of one of McDonnell’s daughters. McDonnell has said he didn’t disclose the gift because it was a present to a family member, not an elected official.

McDonnell had been considered in some circles as a possible running mate for Mitt Romney’s 2012 presidential bid and a possible contender for the Oval Office in 2016.