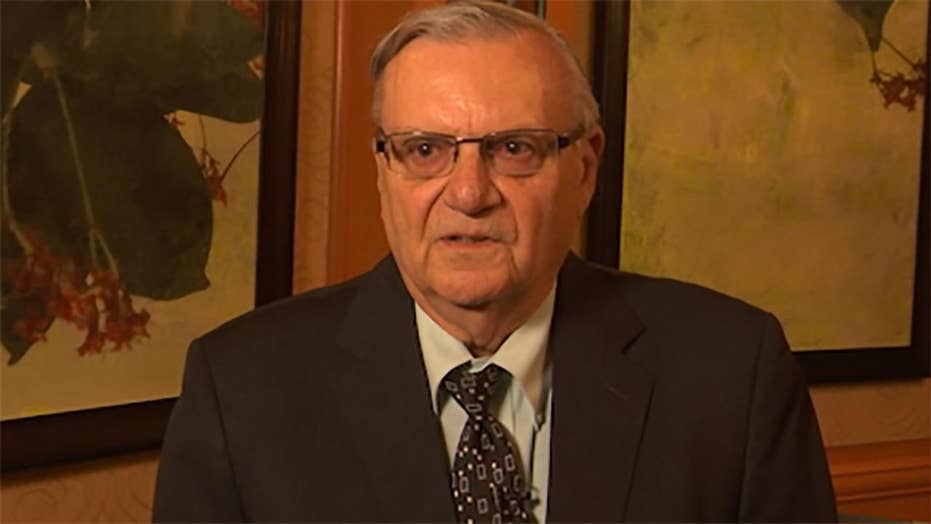 Even with a presidential pardon, former Sheriff Joe Arpaio is still fighting to clear his record

Former Sheriff Joe Arpaio is firing back at U.S. District Judge Susan Bolton for questioning whether President Trump’s pardon of the controversial lawman will be enough to throw out his conviction.

In a filing last week, Bolton said she is not certain she can vacate Arpaio’s criminal contempt conviction because there has been no sentencing yet; therefore, she may only dismiss the case. A presidential pardon does not immediately undo or reverse a conviction.

“Does she believe in the president’s pardon? I think the pardon said everything. So if she wants to do it, OK. And then we’ll appeal all the way to the Supreme Court,” Arpaio said.

Arpaio has requested the case be dismissed and the conviction thrown out, but Bolton may only be considering tossing the case -- leaving the guilty conviction on Arpaio’s record.

The case of the former sheriff of Arizona’s Maricopa County goes back to 2011, when Arpaio was ordered to cease traffic stops that singled out illegal immigrants in Phoenix. In October 2016, charges were filed against Arpaio for contempt of court in relation to the racial profiling case. He was found guilty on July 31 of this year and was set to be sentenced on October 6 before the president pardoned him on August 25.

“Throughout his time as sheriff, Arpaio continued his life’s work of protecting the public from the scourges of crime and illegal immigration. Sheriff Joe Arpaio is now 85 years old, and after more than 50 years of admirable service to our nation, he is worthy candidate for a presidential pardon,” the White House said in a statement when announcing the pardon.

On October 4, Bolton will be considering the request to vacate the conviction entirely.

Arpaio spoke to Fox News as he received the “Courage Under Fire” award from the Conservative Leadership Conference in Las Vegas Saturday night.

Arpaio says he is grateful for the presidential pardon and specified he never requested it, but attributes it to his relationship with Trump. “He [Trump] knows I’m not guilty,” Arpaio said.

Even though Bolton was appointed to the bench by President Bill Clinton, Arpaio places a lot of the blame on the Obama Justice Department for the “witch hunt” that was his conviction. “This all happened under them when they started this prosecution.”

Arpaio was never worried about possibly going to jail. He says and that if he does decide to run for office, he doesn’t know which position he’d put his hat in the ring for. He does want to help more Republicans get elected to fulfill the president’s agenda.

“I’m a little unpredictable like the president,” he said.