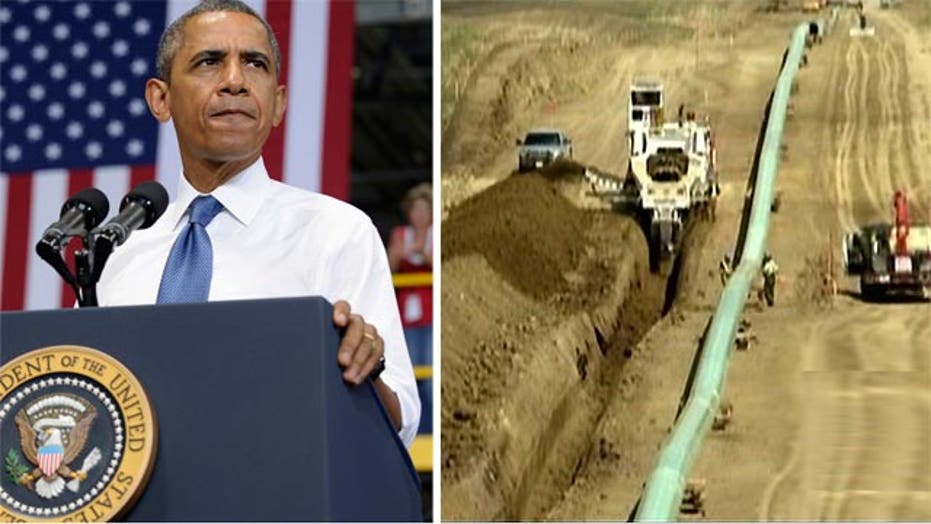 Will Obama ever make a decision on Keystone pipeline?

Thomas P. Donilon, the influential national security adviser in the Obama administration’s first term, begrudgingly told a think tank audience in Washington on Tuesday that he would advise his old boss to give the long-stalled pipeline the green light.

Pressed for an answer by Aspen Institute President and CEO Walter Isaacson as to whether he would urge Obama to allow the 1,700-mile proposed pipeline to move forward, Donilon laughed before stammering: “You know, I uh, you know, I, I would.”

Donilon’s comments came one day after Canada’s prime minister, Stephen Harper, told “Bloomberg Businessweek” that Obama “punted” on the decision, and that the project will eventually move forward “one way or another.”

While the left wing of the Democratic Party has made opposition to the pipeline project a major cause, citing environmental concerns, other elements of the president’s electoral coalition have supported it. Among them are a number of major labor unions,.citing the prospect of tens of thousands of jobs that could be created directly or indirectly.

The TransCanada Corporation first sought U.S. regulatory permission back in September 2008, in the form of a “presidential permit” to construct the second of two Keystone pipelines. Its proposed route would run from the tar sands oil fields of Alberta, Canada to the crude oil refineries situated along America’s Gulf Coast.

Such an enterprise requires approval from the State Department and ultimately the president because it would involve cross-border construction and maintenance.

While then-Secretary of State Hillary Clinton initially indicated that she was likely to urge the White House to approve Keystone, the issue heated up during the 2012 presidential election cycle and in January of that year, Obama rejected TransCanada’s initial application.

Separately, the administration approved construction on the final leg of the project, which stretches from Cushing, Oklahoma to the refineries of the Gulf.

“I believe the administration probably thought they could relieve some of the political pressure by saying, ‘Well, look, we'll build part of the pipeline,’” said Jack Gerard, president of the American Petroleum Institute. “And they actually worked to expedite some of the permits, some of the environmental reviews. So they have stepped in completely to support some of that development.

“What they have failed to do is to allow us to bring that additional supply from the north to the storage facility to Cushing,” Gerard said.

TransCanada modified its application and re-submitted it to the Obama administration, touching off a fresh round of environmental impact studies, public comment sessions, and lobbying efforts by both sides.

A State Department official told Fox News that a separate review,being conducted by the department’s inspector general, is presently underway, looking at whether there were any contracting improprieties during the initial response to TransCanada’s permit. The IG review is expected to be completed sometime early this year, the official said.

In the interim, some industry leaders have indicated that they have essentially given up waiting for Keystone. Continental Resources, a top ten petroleum liquids producer, announced in December that it has begun using rail lines to ship some 35,000 barrels of its own oil that it had intended to use Keystone to transport.

Alison Redford, the premier of Alberta who has made several trips to Washington to lobby for the project, told Fox News, the increasing resort to rail by the energy industry will carry its own environmental impact.  “Year over year over the last two years, there's been a 43 percent increase in the use of rail to ship product,” Redford said, “and that of course that has an impact with respect to greenhouse gases.”

Asked two months ago to specify a timeframe by which the Obama administration might eventually rule on the revised TransCanada application, a spokesperson for Secretary of State John Kerry could not do so.

“I know you're well aware that we've been reviewing comments and working towards the final report,” the State Department’s Jen Psaki told reporters on Nov. 12.