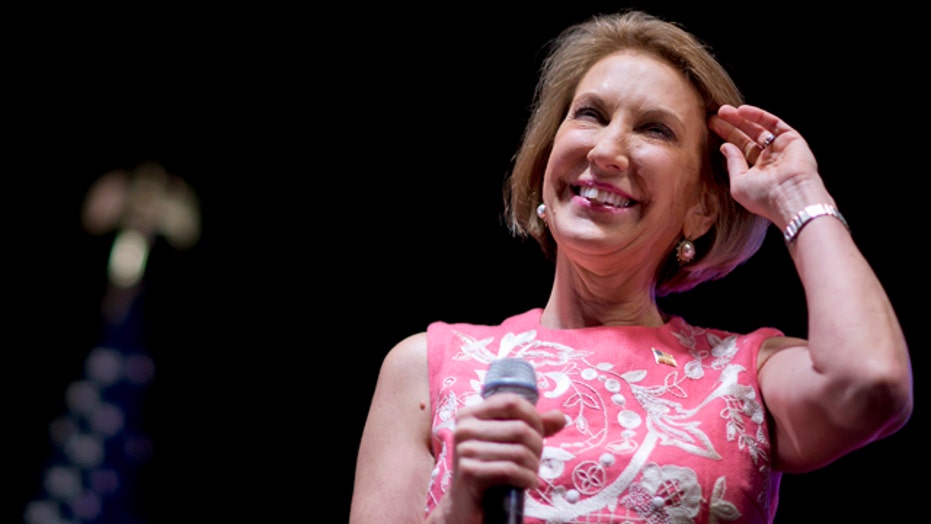 Why Republicans need Fiorina to go up against Clinton

Hillary skips GOP debate to keep up with Kardashians

Republican presidential candidate Carly Fiorina said Sunday that her breakout performance during the last week’s debates has created a surge in support and that she can ascend to win the party nomination.

Fiorina failed to qualify for the prime-time Fox News Channel debate Thursday night for the top-10 ranked GOP candidates. So she competed with the seven others in a forum before the main event.

Still, just the exposure was key to her campaign because as a first-time presidential candidate she lacked name recognition, Fiorina said.

“It was a big night for me,” she told Fox. “Only 40 percent of Republicans had heard my name. … There’s been an uptick in financial support, in support generally.”

Nevertheless, Fiorina, the only major female candidate in the 2016 Republican field, will have a tough time breaking into the top tier or winning the nomination, considering she has consistently ranked among the last in most major polls.

And she is ranked 13th among 15 candidates with 1.3 percent of the vote, according to the most recent averaging of polls by the nonpartisan website RealClearPolitics.com

Beyond the problem of name recognition, Fiorina will continue to have to defend her tenure at Hewlett-Packard where she laid off 30,000 employees and was eventually fired.

On Sunday, Fiorina argued, as she has since the start of the campaign, that she kept the company alive in the post-9/11 and dotcom bubbles.

“Sometimes, in tough times tough calls are necessary,” she said, adding she was fired in a “board room brawl.”

Fiorina said she will continue to do what she has since the start of the race, attack the top candidates, Republican Donald Trump and Democrat Hillary Clinton, and work hard on the campaign trail.

She said Trump has "no excuse" for attacking Fox new anchor Megyn Kelly for her tough questions to him during the debate.

"There’s no excuse for this," she said. "It’s her job to ask tough questions."

Fiorina, whose platform includes cutting the size of government and economic growth through the support of small business, also said: "I’m throwing every punch. ... I’m going to keep working hard, keep doing what I’ve been doing since day one -- keep talking to people and answering their questions.”