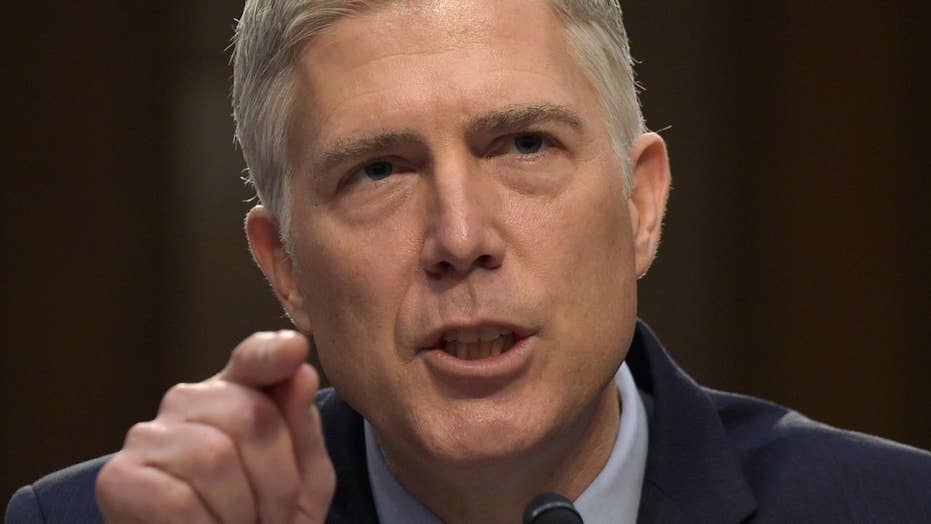 The Senate's standoff on Supreme Court nominee Judge Neil Gorsuch showed no signs of softening Tuesday as lawmakers began the final floor debate, with Republicans and Democrats accusing each other of “unprecedented” tactics in their respective efforts to confirm or block the nominee.

Democrats have enough votes in the GOP-controlled chamber to filibuster President Trump’s high court nominee in a bid to block confirmation.

In a sign of their apparent intent, Sen. Jeff Merkeley, D-Ore., took to the Senate floor at 6:46 p.m. ET and planned to speak all night in opposition to Gorsuch's nomination.

Earlier Tuesday, Senate Majority Leader Mitch McConnell said he has the votes to deploy what's known as the nuclear option -- changing voting procedures to override the filibuster and confirm Gorsuch with 51 votes, as opposed to 60.

The Kentucky Republican has vowed to have the 49-year-old Gorsuch confirmed by Friday, and his warning seemed to play down the possibility of Democrats dropping their filibuster threat.

“It should be unsettling to everyone that our colleagues across the aisle have brought the Senate to this new low,” McConnell said earlier Tuesday. “Judge Gorsuch is independent, fair and has one of the most impressive resumes you will ever see.”

The Senate voted Tuesday afternoon to formally start debate, leading up to the expected vote later in the week.

Iowa Sen. Chuck Grassley -- chairman of the Senate Judiciary Committee that voted Monday to send his nomination to the floor -- officially kicked off the debate.

“After all of this, my Democrat colleagues unfortunately appear to remain committed to a filibuster,” he said. “We’ve had the opportunity to review the 2,700 cases he’s heard.  … Even after all of this process, there’s no attack against the judge that sticks.”

“Merrick Garland -- the only presidential nomination to the Supreme Court, in the history of the United States Senate, to be denied a hearing and a vote,” Durbin said.

After four days of Senate confirmation hearings and dozens of one-on-ones between Gorsuch and senators, the partisan divide is clear.

Republicans argue that Gorsuch, a conservative on the federal appeals court in Denver, would render his high court decisions based on the law as it exists, not how’d he like it to be, and that his lower court decisions are clearly in line with the mainstream.

Beyond the Garland issue, Democrats argue that Gorsuch is a sendup from conservative groups and their “dark money,” and that his legal record shows he would side with corporations and special interest groups over the “little man.”

Texas Sen. John Cornyn, the chamber’s No. 2 Republican, argued Tuesday that Democrats continue to use “the same, old tired arguments” against Gorsuch, including many that have nothing to do with him, and that their opposition results from them “not getting over the fact they lost the lost the [2016 presidential] election.”

Vermont Sen. Bernie Sanders, an independent who caucuses with Democrats, took perhaps the most extreme view Tuesday of what Gorsuch might do on the court.

“There’s a strong possibility he’d overturn Roe v. Wade,” Sanders said. “And I do not want to be a party to what happens.”

After hours of debate Monday, the Judiciary Committee voted 11-9, along party lines, to send Gorsuch's nomination to the full Senate.

If confirmed, Gorsuch, who has spent more than a decade on the Denver federal appeals bench, would take the seat of Associate Justice Antonin Scalia, who died in February 2016, and maintain conservatives’ 5-4 majority in the high court.

The long-term consequences of the bipartisan confrontation could be profound, as the procedural change Republicans intend to enact would also apply to future Supreme Court nominees, allowing them to be voted onto the court without any input from the minority party.

The showdown over the "nuclear option," expected on the Senate floor Thursday, is likely to be accompanied by much hand-wringing from senators bemoaning the decay of the chamber's traditions of bipartisanship and comity.

But both parties are to blame. When the Democrats were in the majority, they removed the 60-vote threshold for nominees to federal benches lower in the judicial system than the Supreme Court.

This change came in 2013 as Republicans, who were in the minority at the time, were blocking Obama picks for critical court vacancies. Republicans said at the time that Democrats would come to regret the move.