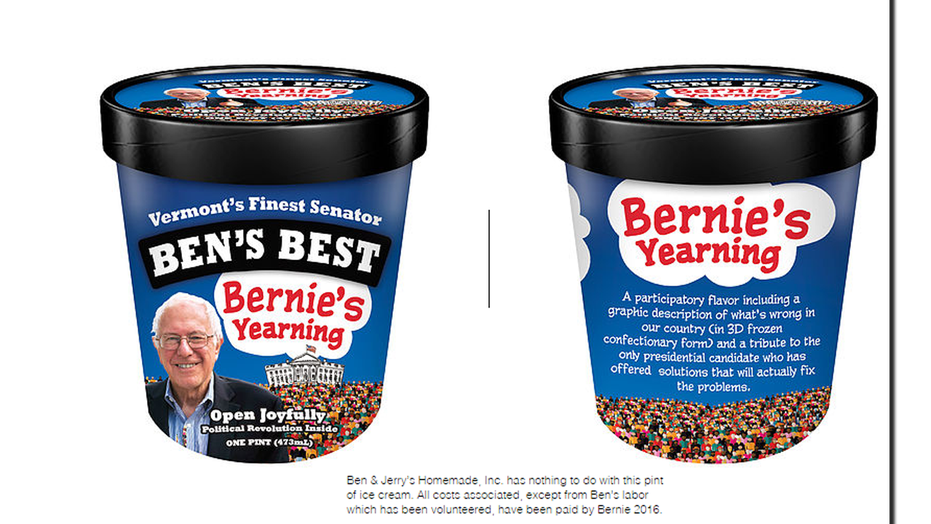 Bernie Sanders gets his own ice cream flavor

Foxnews.com: Ben and Jerry's co-founder came up with an unofficial flavor for Vermont Sen. Bernie Sanders

Sen. Bernie Sanders is getting some sweet, sweet support from one of the co-founders of Ben & Jerry's ice cream -- in the form of his very own flavor.

“Jerry and I have been constituents of Bernie Sanders for the last 30 years,” Cohen says on the official site for the product. “We’ve seen him in action and we believe in him. When we’re out speaking on his behalf people always ask if there’s a Ben and Jerry’s flavor.”

As a result, Cohen dreamed up “Bernie’s Yearning” – plain mint ice cream with a thick disc of chocolate at the top. The mockup carton explains that the disc represents the economic gains that have gone to the wealthiest 1 percent since the recession. “Beneath it, the rest of us,” it says.

Nothing is so unstoppable as a flavor whose time has finally come #FeelTheBern #BerniesYearning: http://ow.ly/Xv3o1

Cohen’s design for the flavor initially was just an idea, but after a positive response he decided to make a limited batch of 40 pints. Twenty-five pints have been donated to the Sanders campaign and are being signed and distributed via a contest.

The Ben & Jerry’s company tweeted after the announcement that the flavor is not an official Ben & Jerry’s product, but a personal creation of Ben Cohen.

The tasty treat isn't the first step into politics by Ben or Jerry, who both have been associated with left-wing causes. In June, the company renamed their "Chocolate Chip Cookie Dough" flavor as "I Dough, I Dough" in celebration of the Supreme Court decision legalizing gay marriage nationwide.