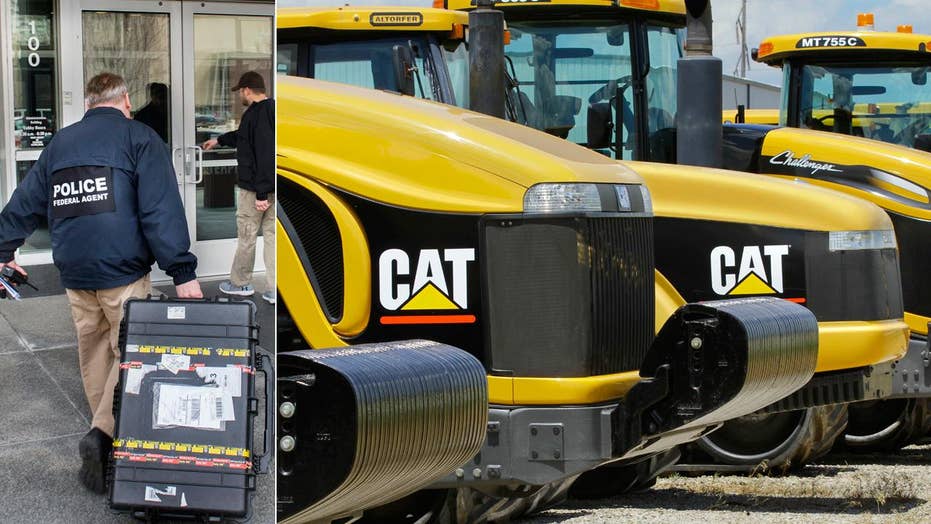 The company, which makes mining and construction equipment, was slapped with three search warrants by the feds on Thursday.

On Friday, U.S. Commerce Secretary Wilbur Ross confirmed that the raids were part of an ongoing probe against the company.

“The Commerce Department has enforcement responsibilities both on imports and on exports, so it’s an important part of our function,” Ross said on CNBC. “We’re going to be even stricter on enforcement, particularly on inbound goods that shouldn’t be.”

The escalation of the government’s dispute with Caterpillar comes as the Trump administration promises to reform corporate taxes and design a system that makes it attractive for companies like Caterpillar to keep their businesses stateside.

Agents from the Internal Revenue Service, the Federal Deposit Insurance Corp. and the U.S. Department of Commerce participated in Thursday’s searches, according to a spokeswoman for the U.S. attorney’s office for the Central District of Illinois. Federal officials searched three Caterpillar locations, including its headquarters in Peoria, Ill. The other two warrants were served at facilities in East Peoria and Morton.

No arrests were made.

Though details remain sketchy on what exactly the feds are after, the raids apparently are tied to Caterpillar’s overseas business practices and tax strategies.

Initially, Caterpillar only confirmed the raids had taken place. The company later acknowledged the raids were connected to its use of a parts subsidiary based in Switzerland as well as tax practices that sparked a Senate investigation and led to shareholder lawsuits and even a $1 billion penalty.

Caterpillar is currently contesting an Internal Revenue Service demand that it pay $2 billion in taxes and penalties for profits assigned to the subsidiary between 2007 and 2012.

What makes the raids all the more noteworthy is they stood in sharp contrast to the praise the manufacturing giant has drawn from Trump since the campaign.

Trump, as a candidate, repeatedly vowed to use Caterpillar and John Deere equipment to build his promised border wall.

A week ago, Trump praised Caterpillar for producing great bulldozers. At a meeting of manufacturing heads at the White House, the former construction magnate told outgoing company chairman Doug Oberhelman, “I love Caterpillar. I’ve been driving them for a long time.”

Trump also touted the company’s biggest bulldozer, the D11, and said he looked forward to an even bigger D12 in the works. He’s also tapped Caterpillar to lead his big manufacturer push.

Caterpillar also has seen its shares soar since Trump’s White House win – buoyed by the promise the president has made on pumping $1 trillion in infrastructure.

Shares of Caterpillar, though, fell more than 5 percent Thursday amid reports that federal agents were searching three of the company’s offices. Caterpillar’s performance dragged down the Dow Thursday following the tax allegations.

New company CEO Jim Umpleby apologized to employees and pledged to continue cooperating with federal authorities after the raids.

Umpleby said he was surprised by the turn of events and that management, including himself, did not have enough information to determine what the feds were after.

“I’m sorry that we had to experience this today,” he said in a statement to employees.

Calls to Caterpillar and the White House for comment were not immediately returned.

Caterpillar’s overseas ventures have long been the subject of scrutiny.

Over the past five years, the company has had to respond to concerns from the Securities and Exchange Commission over its operations in places that are subject to U.S. sanctions.

In 2011, Caterpillar was among a dozen blue chip companies under investigation by the SEC for dealings in Syria, Iran and Sudan.

In 2014, the SEC asked Caterpillar to explain its operations in Syria and Sudan as well as to respond to a news report that reportedly clocked a delivery of Caterpillar products from a Ukrainian tractor company to Cuba.

Caterpillar downplayed its sales in Syria and Sudan. The company also denied wrongdoing in Cuba and pushed back on the news article the SEC cited.