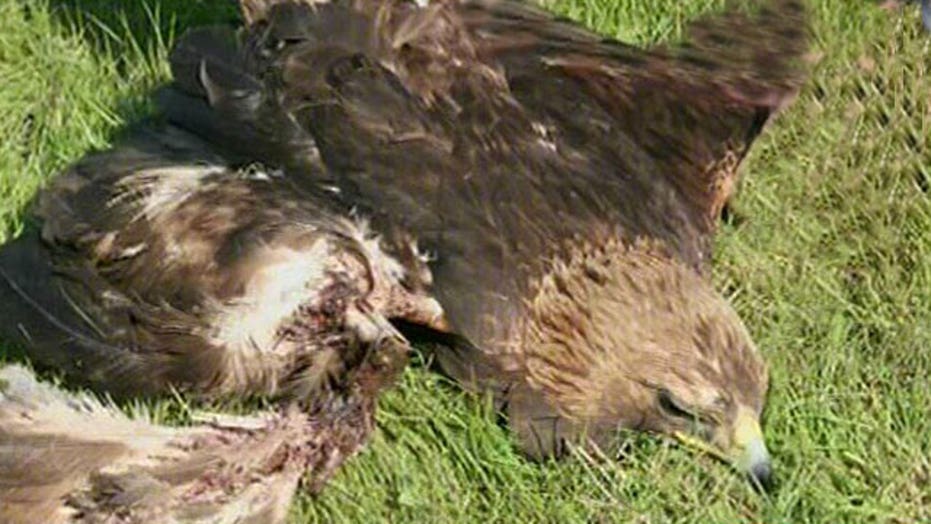 The federal government is not shy about prosecuting those who violate threatened and endangered species laws. But under a new Obama administration policy, wind farm operators are getting 30-year permits to kill protected species.

The government fined marine biologist Nancy Black $12,000 and sentenced her to three years probation for feeding a whale in Monterey Bay.

Just last month, US Fish and Wildlife cited 26-year- old tree trimmer Ernesto Pulido for violating the 1918 Migratory Bird Treaty Act for disturbing a nest of herons. Pulido was hired by the U.S. Postal Service to rid their parking lot in Oakland, Calif. of the birds and the droppings they left behind.

Viani arrived at the scene May 3 to find several adult herons circling the trees and five baby herons hiding under a postal truck. She took them to a wildlife rehabilitation center for blood work, fluids and feeding.

Pulido, who grew up in rural Mexico, visited the birds and voluntarily paid for their rehabilitation costs. Nevertheless, wildlife officials threatened to prosecute and fine him. On Thursday they relented, dropping the charges.

Avid New York City birdwatcher Lincoln Karim's experience was even worse. Karim knows the law: To touch a protected bird-- even a dead one-- you need a permit. But Karim found a dead red-tailed hawk in Central Park on a Sunday. He called animal control to pick up the carcass. When no one responded, he put the bird in a plastic bag, took it home and kept it in the refrigerator so it would not get eaten by predators.

"If I left it on that lawn, it was going to be picked up and taken up by a raccoon or a dog or something," he said.

Suspecting the bird had been poisoned, Karim turned it in Monday morning for an autopsy.

"When I handed it over, they arrested me," he said. "It's not nice getting handcuffed -- especially when you know deep inside you're not a criminal.”

Karim was charged with illegal possession of a raptor. Though his charges were eventually dismissed, marine biologist  Black wasn't so lucky. The U.S. Attorney's Office, on behalf of the Marine Mammal Protection Act, gave Black three years probation and fined her $12,000 for feeding a whale in Monterey Bay.

All three violated federal wildlife laws. Yet contrast their treatment to that of the wind industry.

The new renewable energy policy gives wind farm operators 30-year permits - up from the current 5 years - to kill a specific number of protected species without threat of prosecution.

"What they are doing is ignoring the law," said Bob Johns of the American Bird Conservancy. "The oil and gas industry for example, they have to abide by these laws. They're not killing bald and golden eagles.  And if they are, they're going to be prosecuted for it."

The wind industry’s lethal impact on birds and bats is well documented. An estimated 1.4 million are killed each year by wind farms.

Why? One reason is that their blades move deceptively fast, up to 180 miles an hour. Second, raptors especially like to follow the currents in windy areas looking for field mice and rabbits below. Wind farms typically locate in the same areas and while many operators say they are doing their best to minimize bird fatalities, critics say the administration is practicing a double standard - prosecuting small cases while giving green energy a free pass.

"Now they've got the 30-year eagle permit get-out-of-jail-free card," said Johns. "Nobody else is getting that. Nobody else is allowed to go out and kill eagles like this and get away with it. In California alone, wind farms out there are estimated to have killed over 3,000 golden eagles. And there hasn’t been a single prosecution out there for that.''

The wind industry says it needs the permits to obtain financing and avoid prosecution. They claim some fatalities are inevitable, but hope to mitigate the damage through location and design. In addition, if the world ever hopes to get off fossil fuels, they say wind is an important, clean alternative.

Bird supporters accept their logic, but worry about the sustainability of certain threatened and endangered species.

He worries that a 25-fold increase in wind power, as called for by wind advocates, will decimate bird populations. Currently, the wind accounts for roughly 3 percent of the nation's energy output from 500 wind farms operating 35,000 turbines. President Obama wants to move that to 20 percent  by 2030.

Raptors and bats, which have declined dramatically in some areas, have drawn the most attention. However, the Bureau of Land Management recently approved a draft environmental assessment for a 1,100-acre wind facility in close proximity to the condor range in southern California.

Although BLM hopes to reduce speed limits in the area to reduce road kill and monitor grazing to reduce livestock carcasses, others worry.

Rescued from the brink of extinction, there are only 450 California condors left in the world, many in the Tehachapi mountains where the Tylerhorse wind project is to be located. Condors are large birds and slow to maneuver.

"We're not talking about pigeons or starlings here," said Johns. "We have the California condor and the bald eagle. Both of those birds, we've spent tens and tens -- maybe hundreds of millions of dollars to bring back.  And now we're putting wind turbines right in habitats that they frequent.  We think it will be just a matter of time (before one dies)."