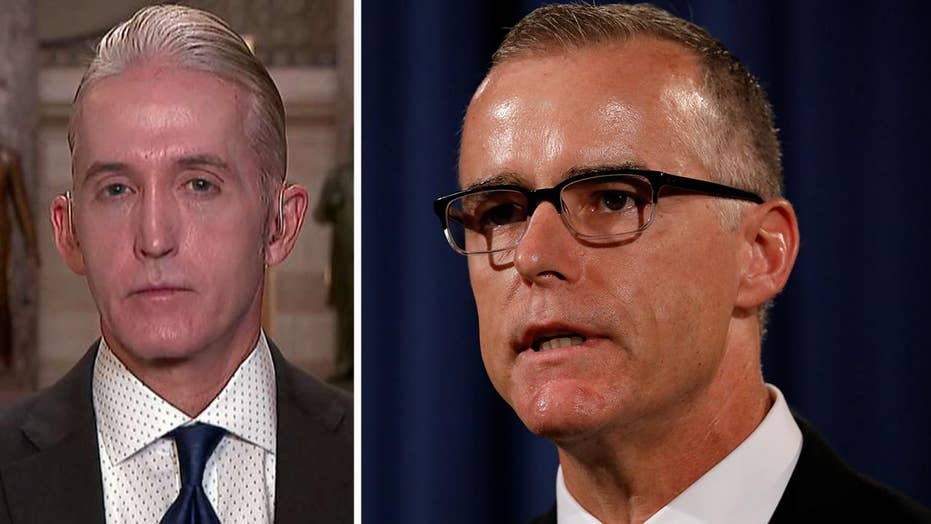 Top Republicans are stepping up their criticism of FBI Deputy Director Andrew McCabe, even suggesting he should be ousted amid allegations conflicts of interest and anti-Trump political prejudice at the agency.

“Andrew McCabe cuts across every facet of every investigation in 2016 that your viewers are interested in from Secretary [Hillary] Clinton’s emails to the investigation into the Trump campaign,” Rep. Trey Gowdy, R-S.C., a member of the House Judiciary Committee, told Fox News' "America's Newsroom" on Tuesday.

But Grassley, R-Iowa, added that doesn’t mean President Trump should get involved.

“Trump ought to stay out of it. I think it’s a Christopher Wray job,” Grassley reportedly said.

McCabe is testifying Tuesday afternoon in a closed-door hearing before the House Intelligence Committee as part of its investigation into Russian meddling in the 2016 presidential election.

“I’ll be a little bit surprised if [McCabe’s] still an employee of the FBI this time next week,” Gowdy told Fox News several days ago.

Several Republicans say they want to know what McCabe knows about text messages between two bureau officials, including one in particular that seems to reference an “insurance policy” against Trump winning the 2016 election.

“I want to believe the path you threw out for consideration in Andy’s office - that there’s no way he gets elected - but I’m afraid we can’t take that risk,” Peter Strzok texted on Aug. 15, 2016. “It’s like an insurance policy in the unlikely event you die before you’re 40.”

Some lawmakers think "Andy" was a reference to McCabe.

The text was among hundreds of messages -- many anti-Trump -- recently released by the Justice Department between FBI officials Strzok and Lisa Page. Stzrok and Page were romantically involved and previously worked on Mueller’s Russia investigation.

“That is devastating and we’re going to explore that at 2 p.m. today,” Gowdy said Tuesday of the text.

The session with McCabe was delayed from last week.

Bruce Ohr was reprimanded in the wake of revelations about undisclosed meetings he had with officials from Fusion GPS. Fusion GPS is the company that commissioned the infamous anti-Trump dossier that contained salacious allegations about then-candidate Donald Trump.

Nellie Ohr worked at Fusion GPS during the summer, specifically on Trump-related issues.

Republicans have also questioned whether McCabe has a conflict of interest. McCabe’s wife in 2015 ran for a state Senate seat in Virginia, backed by money from donors associated with Democratic presidential candidate Hillary Clinton.

In July, President Trump first suggested that McCabe should be fired.

“Why didn’t A.G. Sessions replace Acting FBI Director Andrew McCabe, a Comey friend who was in charge of Clinton investigation but got … big dollars $700,000 for his wife’s political run from Hillary Clinton and her representatives,” he tweeted. “Drain the Swamp!”

Trump can’t fire McCabe outright because McCabe is a career appointee – not a political one.

McCabe began his career at the FBI in 1996 investigating organized crime. He shifted to counterterrorism and ultimately held senior posts at the FBI’s National Security Branch.

He was named the bureau’s deputy director in January 2016 by then-FBI director Jim Comey. McCabe briefly served as acting director of the FBI after Trump fired Comey in May.