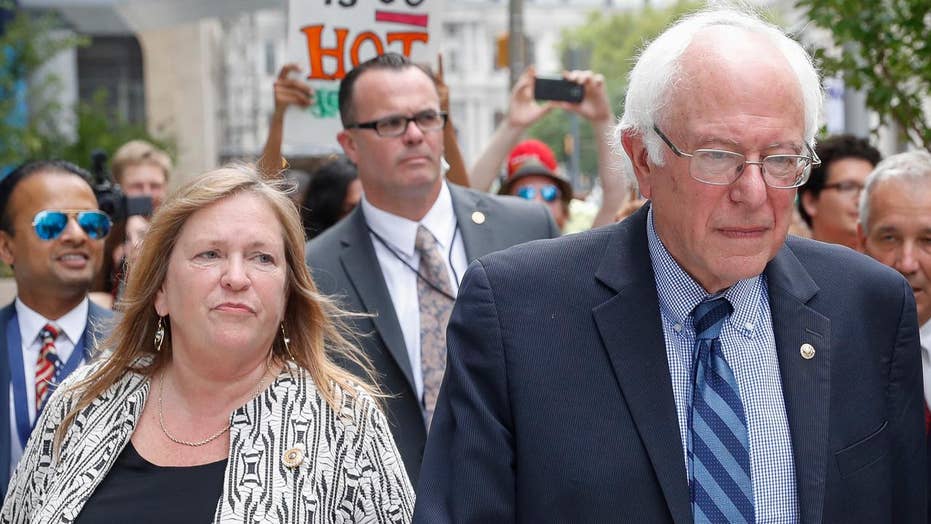 Sanders under scrutiny for time as president of Vermont's Burlington College

Sen. Bernie Sanders’ claims that an ongoing FBI probe of his wife is based on partisan politics don’t square with the fact that it began under President Obama and appears to closely track Democratic opposition research revealed in the hacked emails of the Hillary Clinton campaign.

The FBI and U.S. Attorney in Vermont are investigating Jane O’Meara Sanders for her role in a failed 2010, $10 million college land deal that she orchestrated during her seven-year stint as president of Burlington College in Vermont.

According to a series of 2015 emails to and from Clinton’s campaign manager, John Podesta, leaked to and published on Wikileaks, the Clinton team wrote an extensive political opposition memo entitled “Sanders Top Hits-Thematics.” The memo details Mrs. Sanders’ role in the college’s financial failure, and parallels the ongoing FBI investigation, now before a grand jury, into the scandal.  Other email correspondence shows the Clinton team believed scandals surrounding the college and Jane Sanders provided an opportunity to knock the Vermont senator’s reputation and chances to win the Democratic primary election.

“I think our first question is how are we going to defeat Sanders. … he's not who he says he is -- gun votes, DSCC money, Jane. There may be other options too but these seem to be the strongest attacks to consider. How we undermine Sanders candidacy is our threshold question,” a Clinton campaign official wrote in the fall 2015.

Attaching to an email the “hits” piece with potentially damaging information about Mrs. Sanders, another official wrote: “We have a meeting scheduled on Thursday to discuss next steps on Bernie Sanders … we'd like for everyone to come having reviewed the material and ready to discuss which hits and themes we want to deploy.”

“After several years as the president of Burlington College, Jane O’Meara Sanders resigned amid speculation that she conflicted with the board and [didn’t] bring in enough money for the school. Critics later tied her to the school’s financial trouble after she brokered a deal to borrow $10 million to buy land for the college,” Clinton’s team summed up in a political opposition memo. “Members of the lending agency expressed concern over the college’s ability to repay the loan, and one suggested that if O’Meara Sanders was not involved, the loan would not have been approved.”

The opposition research also highlighted numerous media reports, summarizing related scandals, including the fact that Mrs. Sanders took a $200,000 golden parachute when she left the college and, before that, arranged a deal where Burlington College paid her daughter’s company, The Vermont Woodworking School, $55,000, as part of a craftsman decree.

The trigger for the ongoing investigation into Jane Sanders came in January 2016 when a lawyer representing a Roman Catholic parishioner in the Burlington diocese filed a complaint with federal authorities about the land deal. The legal complaint of the attorney, who was the Vermont state chairman for the Trump campaign, stated that the deal led to a $2 million loss for the diocese.

According to attorney Brady Toensing’s complaint, to secure the $10 million, Jane Sanders obtained a $6.5 million loan from the People’s United Bank to buy tax-exempt bonds issued by a state agency, and a $3.65 million second mortgage from the diocese. Sanders reportedly told college trustees and bank lenders that the college had raised $2.4 million to repay the loan, but trustees learned that many of the donors listed in Mrs. Sanders’ materials hadn’t agreed to those amounts.

Democratic presidential candidate Sen. Bernie Sanders, I-Vt., and wife, Jane, share a light moment as they stroll around a parking lot after arriving at the at the McCarran International Airport Thursday, Feb. 18, 2016, in Las Vegas. (AP Photo/Jae C. Hong) (AP)

As a result of the debt and lower-than-projected student enrollment, Burlington College shut down in May 2016.

Since the complaint was filed in January 2016, people and entities involved with the college loan were asked to provide information for the ongoing federal grand jury probe.

The public harm in this case is substantial because the diocese offers a significant amount of help to the community’s poor and needy, Toensing said.

Sen. Sanders has alleged that Toensing was motivated to file the complaint because of his ties to Trump. But Toensing told Fox News that is simply wrong. He didn’t take on the role of Vermont state chairman for the Trump campaign until the summer of 2016, well after the federal grand jury investigation of Mrs. Sanders began.

“This investigation was started under President Obama's Justice Department,” Toensing said. “The senator's claims are a common, but lame diversion for politicians faced with a grand jury investigation. He should focus on answering the allegations, which are solidly based on analysis of facts from documents obtained through public records requests and evidence gathered by investigative reporters.”

“Ms. Sanders and her husband have built political careers pontificating against corporate corruption and claiming to want to help the needy. The Diocese, however, actually helps the needy through vital direct services,” Toensing wrote.  “The loss of $2 million as a result of Ms. Sanders's apparent misconduct will materially detract from this charitable work and cause significant harm to vulnerable Vermonters.”