Text messages between FBI officials Peter Strzok and Lisa Page in 2016 that were obtained by Fox News on Tuesday refer to then-candidate Donald Trump as a "loathsome human" and "an idiot."

More than 10,000 texts between Strzok and Page were being reviewed by the Justice Department after Strzok was removed from Special Counsel Robert Mueller's Russia probe after it was revealed that some of them contained anti-Trump content.

The messages were sent during the 2016 campaign and contain discussions about various candidates. On March 2, Strzok texted Page that someone "asked me who I’d vote for, guessed [Ohio Gov. John] Kasich."

"Seriously?! Would you not [vote] D[emocrat]?" Page responded.

"America will get what the voting public deserves," said Strzok, to which Page responded. "That’s what I’m afraid of."

Later that same day, Strzok texted Page, "Ok I may vote for Trump."

"What?" answered Page. "Poor Kasich. He’s the only sensible man up there." 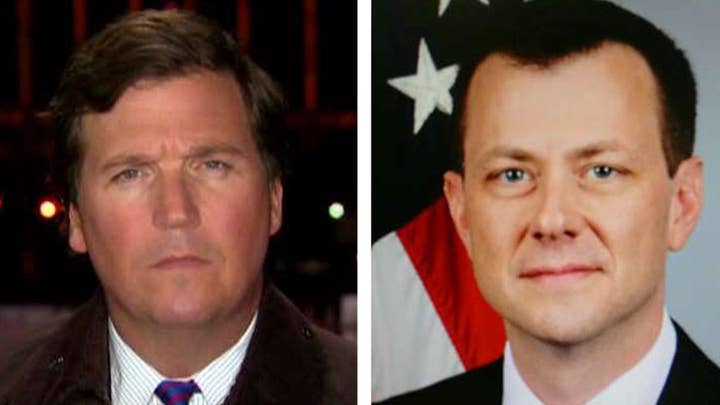 Strzok later told Page, "Exacty [sic] re Kasich. And he has ZERO appeal."

Twelve days later, after Trump took a commanding lead in the Republican delegate race with victories in key "Super Tuesday" primaries, Page texted Strzok, "I can not believe Donald Trump is likely to be an actual, serious candidate for president."

"Oooh, TURN IT ON, TURN IT ON!!! THE DO*CHEBAGS ARE ABOUT TO COME OUT," Strzok texted Page on July 19. "You can tell by the excitable clapping."

"NO WAY!" Page answered, adding "God, it's just a two-bit organization. I do so hope his disorganization comes to bite him hard in November."

On Aug. 6, Page texted Strzok a New York Times article about Muslim lawyer Khzir Khan, who became embroiled in a war of words with Trump after Khan spoke at the Democratic National Convention.

"Jesus. You should read this. And Trump should go f himself," Page wrote in a message attached to the article.

"God that’s a great article," Strzok answered. "Thanks for sharing. And F TRUMP."

Strzok, who was an FBI counterintelligence agent, was reassigned to the FBI’s human resources division after the discovery of the exchanges with Page, with whom he was having an affair. Page was briefly on Mueller’s team, but has since returned to the FBI.

House Intelligence Committee investigators have long regarded Strzok as a key figure in the chain of events that began when the bureau, in 2016, received the infamous anti-Trump "dossier" and launched a counterintelligence investigation into Russian meddling in the election that ultimately came to encompass FISA surveillance of a Trump campaign associate.

Strzok briefed the committee on Dec. 5, 2016, sources said. But within months of that session House Intelligence Committee investigators were contacted by an informant suggesting that there was “documentary evidence” that Strzok was purportedly obstructing the House probe into the dossier.

He also was present during the FBI’s July 2016 interview with Hillary Clinton at the close of the email investigation, shortly before then-FBI director James Comey called her actions "extremely careless" without recommending criminal charges.